Digging the Surface | The Indian Express

Digging the Surface | The Indian Express

Artist Manish Pushkale’s latest exhibition is a reminder of the Bhopal gas tragedy and an ode to languages on the verge of extinction. An untitled work recalls lives lost in the Bhopal gas tragedy
The memories of the night between December 2 and 3, 1984, when one of the worst industrial disasters struck Bhopal are clearly etched in Delhi-based artist Manish Pushkale’s mind. Trying to make sense of the world around him as a 10-year-old, he couldn’t understand the reason behind his nausea and swollen eyes the next morning. Unaware of the harm the methyl isocyanate overflowing from the Union Carbide pesticide factory had caused in his hometown, he wondered why beggars and animals “were asleep” on the streets, on the route to his school. It was only when Pushkale visited an ailing relative later at JP Hospital that he saw a mountain of over 500 human bodies piled on one side and animals on the other, and realised the chilling aftermath of the incident. His latest show “Lamina” at Akar Prakar gallery in Delhi, is a grim reminder of the disaster.
“The newspaper had no news the next morning since the incident occurred at midnight. Having a phone was a luxury and there was no social media back then to spread the information. All we relied was on word of mouth,” says Pushake, whose 20 canvases, an interplay of oils and bits of paper collages, draw upon that memory. A sea of emerald blue colour has three luminescent yellow pillars of light floating on its body in Lamina 10. “These are like the graves, a memory, a form of absence that says there was something in the past but now is gone. There is a void,” says 45-year-old Pushkale. He and his mother have been suffering from asthma since the incident. 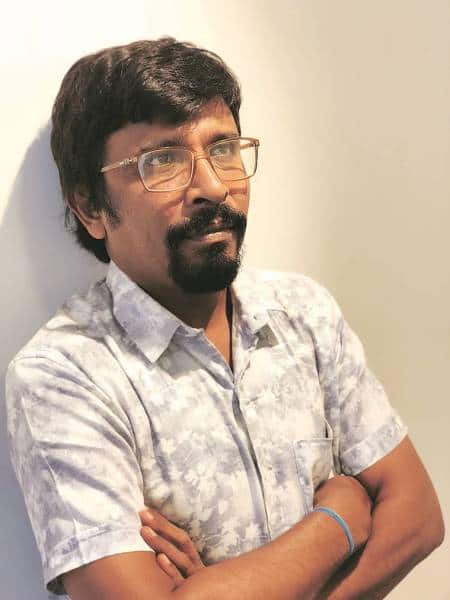 Manish Pushkale
The trained geologist, with a postgraduate degree in geology from MVM College in Bhopal, recollects how photographer Raghu Rai’s image from the incident of a hand removing mud from the face of an open-eyed dead child during a burial has stayed with him. Pushkale prefers not to paint the incident in the conventional way but lets his canvases read like poems and metaphors. Lamina 7 has an abstract grey figure sandwiched between a muddy colour ruling half the frame, representing earth, and blue referencing the sky. Its roots can be traced to Pushkale’s interest in palaeontology — the science of fossils. “Somewhere in between is where we exist, with our constraints and our own genocides. Genocide is not a natural process. It is an artificial process made by man to kill man,” he says.
This thought spills over to his other muse, the Indus Valley civilisation. Lamina 6 revolves around an excavated area that hides a utensil that stands out amid a bed of green plants. “The residue proves that there was a presence once upon a time that does not exist any more. All archaeological findings are representations of the past,” says the artist. Dark human figures in black, lying on the ground, with dismantled surroundings in a barren grey landscape around them constitutes Lamina 12.”Everything is there in the frame except life. The surrounding places are disintegrated and scattered. This is a satire on the whole notion of modernity in the absence of civilisation and the presence of violence,” says the artist.
Many letters of the alphabets of different languages have been interspersed in several of the works. “The show is also an ode to the languages that are on the verge of extinction in India. The 1961 census in the country listed 1,652 languages being spoken. The numbers have alarmingly dwindled in the last 50 years and we don’t know the real ground data. We are slowly moving on the verge of one language for a nation as in the Western world. This is the unique quality of our nation. We are slowly losing our aesthetics, traditions, languages and sensibilities,” says Pushkale. The artist feels that it is his duty to underline these losses through his works and he seems to have succeeded in his endeavour.
At D-43 Defence Colony, till September 1.
Publicado por salud equitativa en 7:51