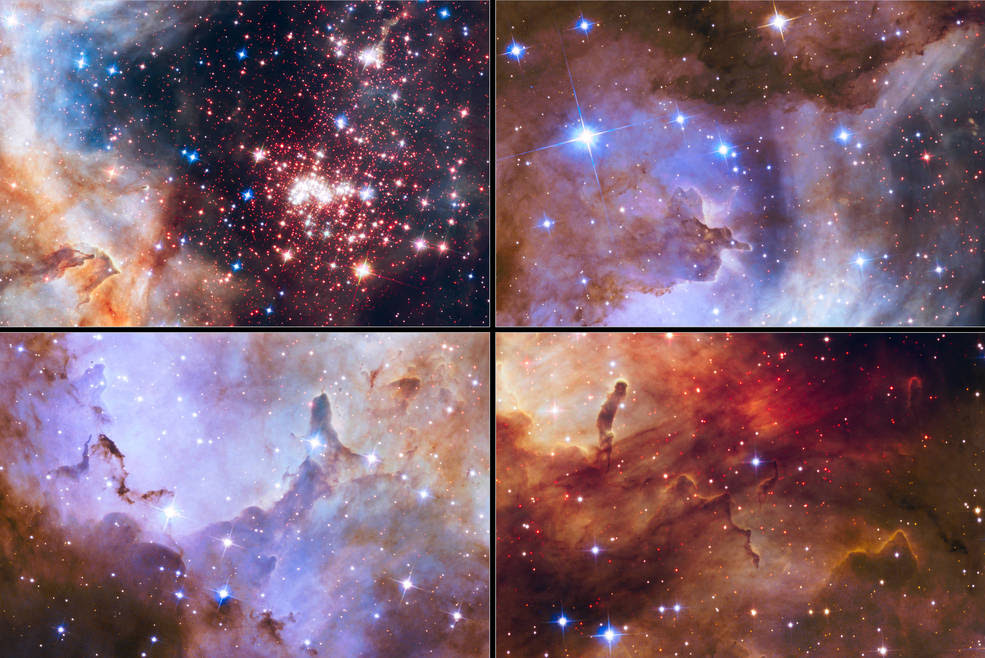 A glittering tapestry of young stars flares to life in these detailed close-up NASA Hubble Space Telescope photos of star cluster Westerlund 2 that are being released in celebration of Hubble's 25 years of exploring the universe since its launch on April 24, 1990.
Credits: NASA/ESA
A new window to the universe opened for humanity on the morning of April 24, 1990, when NASA’s Hubble Space Telescope was lofted into space, riding atop a Promethean flame from the space shuttle Discovery.
"Even the most optimistic person to whom you could have spoken back in 1990 couldn’t have predicted the degree to which Hubble would re-write our astrophysics and planetary science textbooks," said Charlie Bolden, NASA administrator and pilot of the mission that brought Hubble into orbit. "A quarter century later, Hubble has fundamentally changed human understanding of the universe and our place in it."
Hubble’s scientific payoff has been immeasurable; it has shown us the universe as we never imagined.
“Hubble has changed the course of science with its discoveries and shown us the depth and beauty of the universe,” said John Grunsfeld, Hubble astronaut and associate administrator of NASA’s Science Mission Directorate at NASA Headquarters, Washington. “With both new observations and treasures hidden in the existing archive of data Hubble will continue to unravel the mysteries of the cosmos in the years ahead.”
Above the hazy blur of Earth’s atmosphere, Hubble provides a larger-than-life, “super-rainbow” view of the universe: from ultraviolet, visible, and into near-infrared wavelengths of light. Hubble’s fantastic images unveil both beauty and cataclysmic disturbances across an unimaginably deep cosmic tapestry. Combined with the powers of NASA’s Great Observatories, Chandra, Spitzer, and the deorbited Compton Gamma Ray Observatory, Hubble painted a picture of the solar system and beyond that has changed astronomy forever.
Initially tasked to measure the expansion rate of the universe, find very distant galaxies, and investigate black holes, Hubble’s research has now covered nearly every frontier in deep-space astronomy: the expansion and acceleration rate of the universe, the apparent link between galaxy mass and central black hole mass; early galaxy formation shortly after the Big Bang; strange transient events in space; and the chemistry and potential habitability of planets orbiting other stars.
Hubble’s long exposures of the far universe have unveiled an “undiscovered country” of discordant objects, violent explosions, and tumultuous galaxy collisions. They tell the story of the dynamic evolution of the universe from the Big Bang.
Hubble has also provided a fascinating view of our own dynamic solar system, revealing colliding asteroids, changing aurorae and weather on planets and moons, and even enabling the detection of previously unknown moons.
More than being just a tool for astronomers, Hubble is the people’s telescope.  It is one of the most influential scientific instruments ever built, reinvigorating and reshaping what the world perceives as outer space. Its images and discoveries have captured the imagination of people around the world, touching everything from pop culture to science fiction, from academia to art.  Hubble has also substantially improved science, technology, engineering and mathematics (STEM) education nationwide. Its education materials are used by half a million teachers and six million students annually in all 50 states.
Thanks to five space shuttle servicing missions, totaling 32 astronaut space walks, and the multitude of scientists, engineers, and staff that worked on Hubble, the observatory has long out-lasted its planned end-of-mission in 2005. The observatory’s science capabilities are more powerful than at its launch, with upgraded instruments, computers, and control systems operating at top performance until at least the end of the decade.
With support from ESA (European Space Agency), Hubble has served as a trailblazer for planning humanity's next big step into the cosmos. The James Webb Space Telescope(JWST),  a partnership with ESA and the Canadian Space Agency, is scheduled for launch in 2018 and will see farther back in time than Hubble with its extended infrared capabilities. JWST will reveal fledgling galaxies from the first 200 million years after the Big Bang. It will also peer deeply into the dusty planet-forming disks around young stars that Hubble often sees in silhouette, and push the boundaries of learning about planets orbiting other stars.
The Hubble Space Telescope is a project of international cooperation between NASA and ESA. NASA's Goddard Space Flight Center in Greenbelt, Maryland, manages the telescope. The Space Telescope Science Institute (STScI) in Baltimore, Maryland, conducts Hubble science operations. STScI is operated for NASA by the Association of Universities for Research in Astronomy, Inc., in Washington.
Rob GutroNASA's Goddard Space Flight Center
Editor: Lynn Jenner
el dispensador dice:
bien podría decirte,
que estas son mis ventanas,
los árboles de mi jardín,
sus frutos,
sus raíces,
sus ramas,
pero en verdad,
sólo se trata... de las pinturas de mi alma...
te invito a ver sus detalles,
a sumergirte en sus destellos,
que hablan sin siquiera pronunciar palabra,
que agregan valor,
como faro en océano en noche cerrada...
cuando concedes valor a los trazos,
la pintura enciende el espíritu,
y simplemente lo llama,
para formar parte de una única gracia...
para existir...
necesitas colores en la paz,
del puente que une a la consciencia con tu alma.
JUNIO 30, 2015.-
Publicado por salud equitativa en 12:06 No hay comentarios:

A new NASA supercomputer simulation of the planet and debris disk around the nearby star Beta Pictoris reveals that the planet's motion drives spiral waves throughout the disk, a phenomenon that causes collisions among the orbiting debris. Patterns in the collisions and the resulting dust appear to account for many observed features that previous research has been unable to fully explain.
"We essentially created a virtual Beta Pictoris in the computer and watched it evolve over millions of years," said Erika Nesvold, an astrophysicist at the University of Maryland, Baltimore County, who co-developed the simulation. "This is the first full 3-D model of a debris disk where we can watch the development of asymmetric features formed by planets, like warps and eccentric rings, and also track collisions among the particles at the same time."
In 1984, Beta Pictoris became the second star known to be surrounded by a bright disk of dust and debris. Located only 63 light-years away, Beta Pictoris is an estimated 21 million years old, or less than 1 percent the age of our solar system. It offers astronomers a front-row seat to the evolution of a young planetary system and it remains one of the closest, youngest and best-studied examples today. The disk, which we see edge on, contains rock and ice fragments ranging in size from objects larger than houses to grains as small as smoke particles. It's a younger version of the Kuiper belt at the fringes of our own planetary system.
Nesvold and her colleague Marc Kuchner, an astrophysicist at NASA's Goddard Space Flight Center in Greenbelt, Maryland, presented the findings Thursday during the "In the Spirit of Lyot 2015" conference in Montreal, which focuses on the direct detection of planets and disks around distant stars. A paper describing the research has been submitted to The Astrophysical Journal.

In 2009, astronomers confirmed the existence of Beta Pictoris b, a planet with an estimated mass of about nine times Jupiter's, in the debris disk around Beta Pictoris. Traveling along a tilted and slightly elongated 20-year orbit, the planet stays about as far away from its star as Saturn does from our sun.
Astronomers have struggled to explain various features seen in the disk, including a warp apparent at submillimeter wavelengths, an X-shaped pattern visible in scattered light, and vast clumps of carbon monoxide gas. A common ingredient in comets, carbon monoxide molecules are destroyed by ultraviolet starlight in a few hundred years. To explain why the gas is clumped, previous researchers suggested the clumps could be evidence of icy debris being corralled by a second as-yet-unseen planet, resulting in an unusually high number of collisions that produce carbon monoxide. Or perhaps the gas was the aftermath of an extraordinary crash of icy worlds as large as Mars.
"Our simulation suggests many of these features can be readily explained by a pair of colliding spiral waves excited in the disk by the motion and gravity of Beta Pictoris b," Kuchner said. "Much like someone doing a cannonball in a swimming pool, the planet drove huge changes in the debris disk once it reached its present orbit." 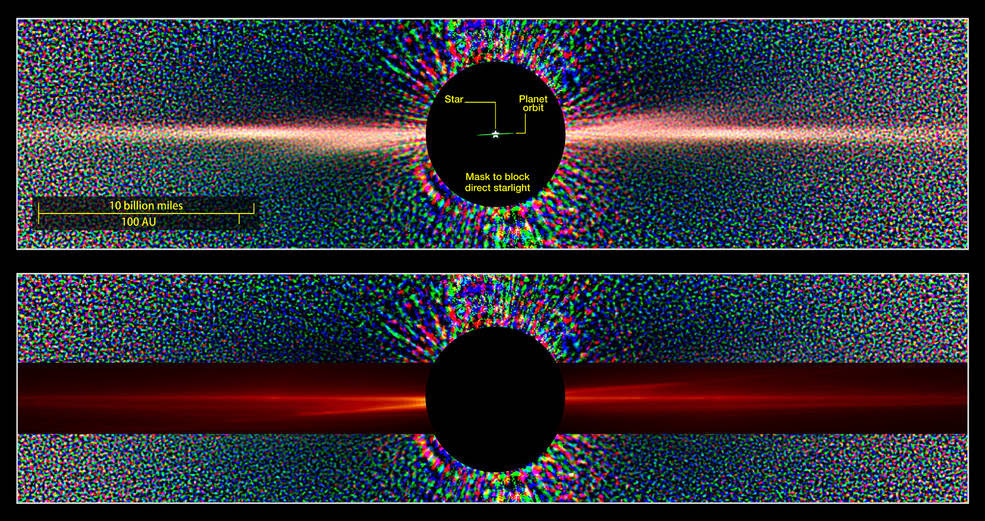 These images compare a view of Beta Pictoris in scattered light as seen by the Hubble Space Telescope (top) with a similar view constructed from data in the SMACK simulation (red overlay, bottom). The X pattern in the Hubble image forms as a result of a faint secondary dust disk inclined to the main debris disk. Previous simulations were unable to reproduce this feature, but the SMACK model replicates the overall pattern because it captures the three-dimensional distribution of the collisions responsible for making the dust.
Credits: Top, NASA/ESA and D. Golimowski (Johns Hopkins Univ.); bottom, NASA Goddard/E. Nesvold and M. Kuchner
Unlabeled image

Keeping tabs on thousands of fragmenting particles over millions of years is a computationally difficult task. Existing models either weren't stable over a sufficiently long time or contained approximations that could mask some of the structure Nesvold and Kuchner were looking for.
Working with Margaret Pan and Hanno Rein, both now at the University of Toronto, they developed a method where each particle in the simulation represents a cluster of bodies with a range of sizes and similar motions. By tracking how these "superparticles" interact, they could see how collisions among trillions of fragments produce dust and, combined with other forces in the disk, shape it into the kinds of patterns seen by telescopes. The technique, called the Superparticle-Method Algorithm for Collisions in Kuiper belts (SMACK), also greatly reduces the time required to run such a complex computation.
Using the Discover supercomputer operated by the NASA Center for Climate Simulation at Goddard, the SMACK-driven Beta Pictoris model ran for 11 days and tracked the evolution of 100,000 superparticles over the lifetime of the disk.
As the planet moves along its tilted path, it passes vertically through the disk twice each orbit. Its gravity excites a vertical spiral wave in the disk. Debris concentrates in the crests and troughs of the waves and collides most often there, which explains the X-shaped pattern seen in the dust and may help explain the carbon monoxide clumps.
The planet's orbit also is slightly eccentric, which means its distance from the star varies a little every orbit. This motion stirs up the debris and drives a second spiral wave across the face of the disk. This wave increases collisions in the inner regions of the disk, which removes larger fragments by grinding them away. In the real disk, astronomers report a similar clearing out of large debris close to the star.
"One of the nagging questions about Beta Pictoris is how the planet ended up in such an odd orbit," Nesvold explained. "Our simulation suggests it arrived there about 10 million years ago, possibly after interacting with other planets orbiting the star that we haven't detected yet."
Related Links