Pyjamas are Forgiving, Khanna’s debut novel, is set in an Ayurvedic spa retreat in Kerala, where patients constantly consume ghee, take laxatives and are feasted on by leeches. Twinkle Khanna
Twinkle Khanna makes no bones about the fact that her Bollywood career was a short-lived affair for two reasons: one, she wasn’t really interested, and that she wasn’t a very good actor. So it is writing where the 43-year-old columnist and producer seeks her thrills. Pyjamas are Forgiving, Khanna’s debut novel, is set in an Ayurvedic spa retreat in Kerala, where patients constantly consume ghee, take laxatives and are feasted on by leeches. Anshu, a 40-something Bombay woman believes in the arduous process but her willpower is sorely tested when her ex-husband and his new wife show up at the same time. Sitting in her Juhu flat, Khanna talks of relationships in confined spaces, and why the right wing might approve of her novel. Excerpts:
When did you think of the story? Anshu doesn’t have much going for her, does she, when she lands up at the retreat?
I’ve been writing the book for almost two years, almost immediately after my previous one, The Legend of Lakshmi Prasad. I was asked to contribute a story for an anthology, so I began writing, but soon enough, I realised that it was going to be a novel.
There are usually two kinds of women that are written about: the broken, muddled-up ones who then find redemption, and the other is the strong one who powers through everything; this type is a myth and we’re setting standards for young women that are difficult to achieve. I’m interested in writing about women who can be both frail, and capable when they need to be. I wanted to know what it would be like to dig into a woman who is successful in her profession, but who is also single, and without children. I wanted to write about how she perceives herself, and why do these self-made women feel so inadequate in our society. 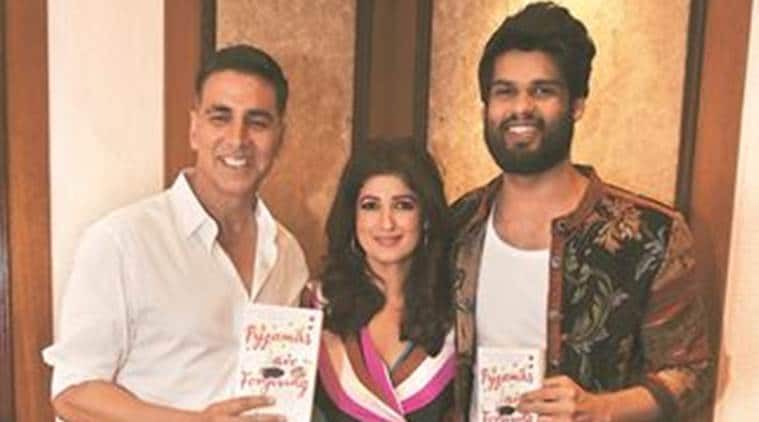 Twinkle Khanna with husband Akshay Kumar and cousin Karan Kapadia at her book launch.
Earlier this year, you produced Pad Man, which was based on your short story. Will you consider adapting the novel for the big screen as well?
I don’t write like that, even though my other short story, Salaam Noni Appa became a play, and Arunachalam Muruganantham’s story became Pad Man. It was a story that needed to be told, urgently, because it could change attitudes about menstruation within a culture and a household. I don’t know if this story needs to be told like that.
You have committed an unforgivable crime in the novel, when you write about an Ayurvedic concoction that mixes ghee with gaumutra (cow urine). How could you do that to a ghee-loving nation?
I didn’t make that up. Shanthamaaya Sthalam is based on a real place in Kerala, and those are the actual rituals. The right wing might approve of that mixture (laughs), but it is based on an actual science that advocates purging as a way to cleanse your body.
You seem to be exploring the kind of betrayals that take place in relationships; whether it is drugging somebody or flat-out lying. What is it about betrayal that interests you so much?
The reason I wrote this as a novel instead of a short story is because in the latter, you have to do a lot of telling. Here I have the luxury of showing the kind of things that happen in a confined place. As for betrayals, they don’t always emerge from something evil; rather it is just the callousness with which we treat each other that is more hurtful.
Your stories often feature sisters. Is that the autobiographical bit in your work?
You’re right. Perhaps my sister Rinke has had an impact on me, or maybe I’m just having fun shoving her into all sorts of fictitious situations. She’s very pissed off that the seemingly insipid sister in the novel lives in Delhi, which is where she lives as well.
Publicado por salud equitativa en 7:44