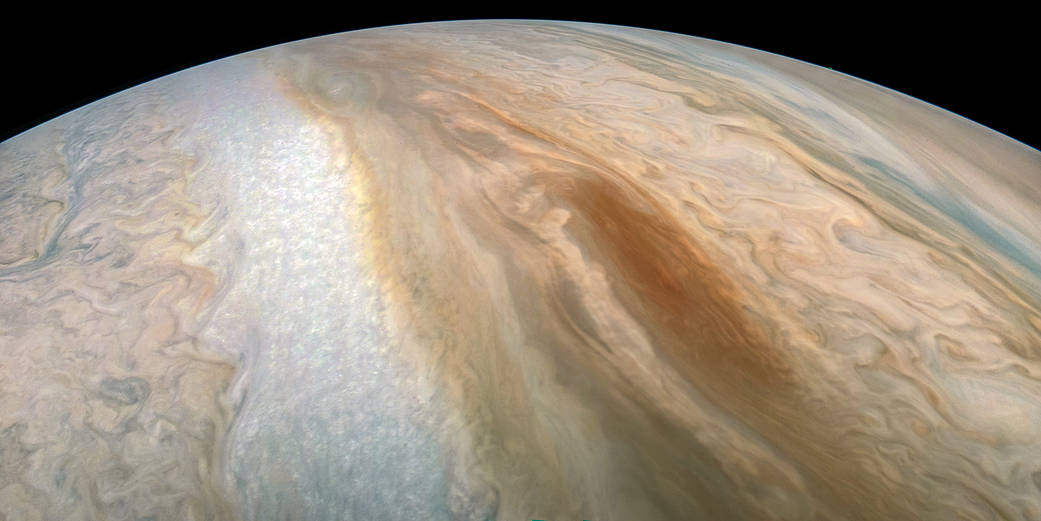 A long, brown oval known as a "brown barge" in Jupiter's South Equatorial Belt is captured in this color-enhanced image from NASA's Juno spacecraft.
Brown barges are cyclonic regions that usually lie within Jupiter's dark North Equatorial Belt, although they are sometimes found in the similarly dark South Equatorial Belt as well. They can often be difficult to detect visually because their color blends in with the dark surroundings. At other times, as with this image, the dark belt material recedes, creating a lighter-colored background against which the brown barge is more conspicuous. Brown barges usually dissipate after the entire cloud belt undergoes an upheaval and reorganizes itself. Juno is giving us the first glimpses of the detailed structure within such a barge.
This image was taken at 6:26 p.m. PDT on Sept. 6, 2018 (9:26 p.m. EDT) as the spacecraft performed its 15th close flyby of Jupiter. At the time, Juno was 7,425 miles (11,950 kilometers) from the planet's cloud tops, above a southern latitude of approximately 22 degrees.
Citizen scientist Kevin M. Gill created this image using data from the spacecraft's JunoCam imager. The image has been rotated 90 degrees to the right from the original image.
JunoCam's raw images are available for the public to peruse and process into image products at https://missionjuno.swri.edu/junocam.
More information about Juno is at https://www.nasa.gov/juno and https://missionjuno.swri.edu.
Image Credits: NASA/JPL-Caltech/SwRI/MSSS/Kevin M. Gill
Image download options
Editor: Tony Greicius
Publicado por salud equitativa en 11:12