Congratulating the awardees, PM Modi ommended their dedication towards education and for making it their life mantra. "A teacher remains a teacher throughout life," said Modi 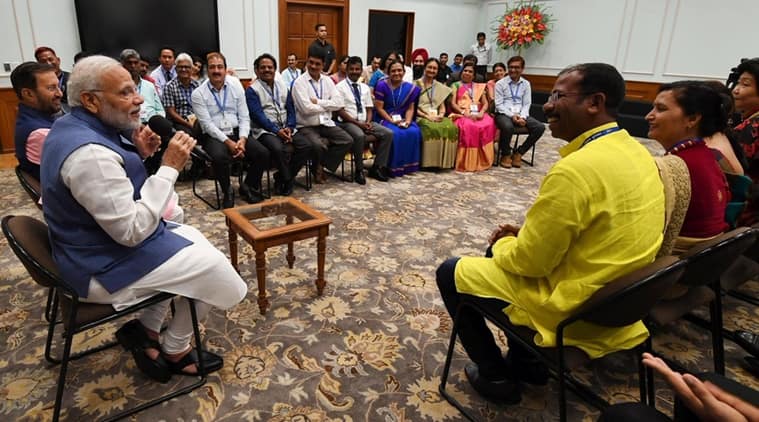 Prime Minister Narendra Modi on Tuesday interacted with the awardees of National Teachers’ Awards, 2017 on the eve of Teachers’ Day. Congratulating the awardees, PM Modi commended their dedication towards education and for making it their life mantra. “A teacher remains a teacher throughout life,” said Modi. Union HRD Minister Prakash Javadekar was also present on the occasion.
During the interaction, Prime Minister urged the awardees to mobilise the community and to make them an integral part of school development. He also exhorted the teachers to work towards bringing out the inherent strength of students, especially those from the poor and rural background. Prime Minister said that the educators should work towards removing the disconnect between the teachers and the students so that teachers are remembered by the students throughout their life. He also encouraged the teachers to digitally transform their schools and its neighbourhood.
India will celebrate the teachers day tomorrow, September 5 to mark the birth anniversary of the second president of India, Sarvepalli Radhakrishnan. At his tenure during President of India (1962-67), his students and friends wanted to him to celebrate his birthday. Known for his humble nature, he requested, “Instead of celebrating my birthday, it would be my proud privilege if September 5 is observed as Teachers’ Day.” Since then, his birthday has been observed as Teachers’ Day.
Publicado por salud equitativa en 7:43