The End of Utopia | The Indian Express

The End of Utopia | The Indian Express

The End of Utopia 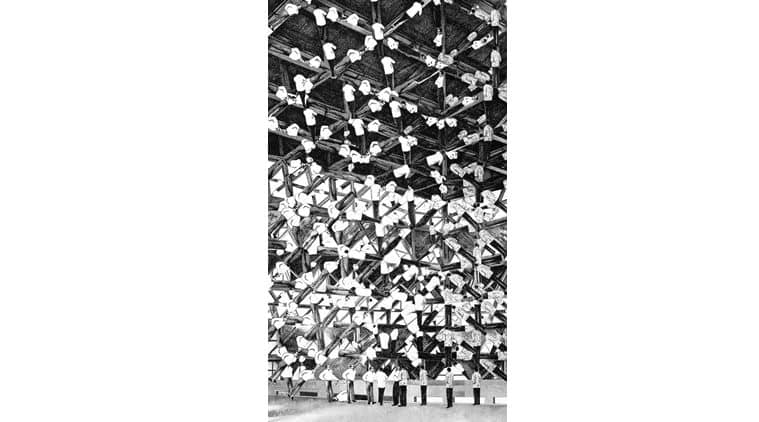 Mohanty’s work titled Foundational Political Myth Bodies
When discussions began regarding the possible demolition of the iconic Hall of Nations in Delhi, with arguments for and against, it had already been months that artist Paribartana Mohanty had been frequenting the site. He was interested in “the human figure in architectural photography” during its architectural planning, and how photographer Madan Mahatta had documented the progress in drawings and photographs, often with people in the frame. However, when the news of its possible flattening emerged, Mohanty shifted the focus of his series, opting to document life around the buildings, including its caretakers whom he would play cricket with in the premises, and also the possible fall of the structure.
At his second solo in Delhi, “Trees are Stranger than Aliens in the Movies”, at Vadehra Art Gallery, Mohanty recollects these encounters, painting the architectural structure and also his own memories. The current display questions not just the present but also the past. Recipient of the FICA Emerging Artist Award 2010, he references “the childhood story of Kala Pahada destroying temples in Odisha, the Babri masjid demolition, to the destruction of cities elsewhere in Syria and Gaza or the other kind of demolition or fall of morals and laws; the story of the Fall of Icarus, the beef ban and the ‘demonetisation’ declared in an apocalyptic urgency”. “I am thinking about fall — the fall of buildings, morality, cities, and how it has become a common visual nowadays. The relationship between destruction in Syria and demonetisation is not distant. It is always a few people who are in power, and they take decisions that impact the rest,” says Mohanty, who completed his Masters in History of Art from National Museum Institute, and initially worked on oil portraits.
In the titular video we see references to the winged Icarus falling down from the sky as well as German filmmaker Hito Steyerl’s belief that all societies are falling simultaneously. “It deals with the fail of modernism as a model. We often correlate fall with fate, but at times it feels that some people design your fate. It is planned destruction,” says Mohanty. The work is also an uncanny reminder of another video by Mohanty — Post-Mughal Hunting Scene, where the artist had filmed a victim of the 2002 riots in Gujarat, exploring how art can represent victim and crisis. “I was interested in how a crisis too becomes a potential site for creative and innovative thinking in some ways. When there is a crisis, people are forced to come up with ways to deal with it. In art, at times, crisis is even objectified to produce work,” says Mohanty.
The 35-year-old takes off from the belief in Mexican mythology, according to which, “We are made of broken bones of humans”. He interprets that as, “We aren’t humans”. “The word alien can be used, perhaps, to categorise our kind, as we are already separating, isolating, raping, lynching, and hunting them down, the aliens are within our collectivity. I don’t believe that aliens are some sort of extraterritorial species,” says Mohanty.
The exhibition is on at Vadehra Art Gallery, D-53, Defence Colony, till September 22
Publicado por salud equitativa en 11:10