Weaving from Memory | The Indian Express

Weaving from Memory | The Indian Express 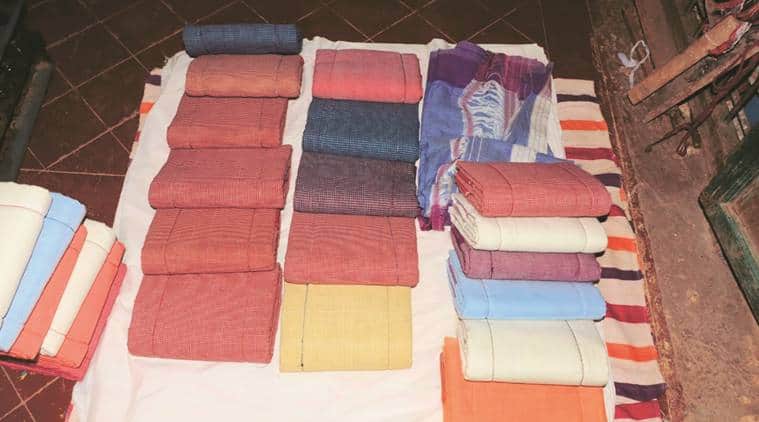 Patteda anchu saris on display
One sees neatly stacked saris all around at the Haat Studio of the Dastakari Haat Samiti at Meharchand Market. The saris, which range from muted offerings to colour block, have a uniform sheen to them — courtesy the inlaid checks. This is the famous patteda anchu weave, from north Karnataka. The quest to locate and trace the weave took on folklore proportions, almost bordering on the mythical. Hemlata Jain, a crafts revivalist who had been working with the Karnataka Handloom Board for several years, had always heard about this chequered weave, but had never laid her eyes on it. “In my initial research that I conducted in North Karnataka in villages like Gajendragarh, Belgaum, Raichur, Bellary and others, I noticed that they were all using power looms. Many old weaves and techniques had died, and synthetic fabric was being used. I would keep hearing about patteda anchu and how it was always a part of the wedding trousseau of a bride, especially given to her by the father as a blessing. It would first be offered to the Yellama goddess, and then gifted to the daughter. There were also stories about the devadasis getting them as a traditional offering,” shares Jain, who holds a PhD in the weave from NIFT, Delhi.
Jain’s search also took her to a woman whose mother was a devadasi. “The girl had a fragment of a cloth that her grandmother had received from the temple. When we traced it, it turned out to be more than two centuries old. That was the first time that I saw patteda anchu,” says Jain.
Now that she had a blueprint, she needed people to manifest this vision. She found two weavers. “The first one I found was a 90-year-old man, who had seen the sari being woven 40 years ago. Thankfully, the weavers I found were able to recreate the weave and technique,” says Jain, 39. She started with weaving stoles and towels, the checks lending the fabric a more contemporary appeal. A meeting with Jaya Jaitly led to an order for 100 saris, which found buyers immediately. Hemlata Jain with an artisan
“When I started out with patteda anchu, in 2014, I had just one loom. Everyone said, they might not work. But I made sure that we contemporised them. These saris don’t need a fall, or even ironing. The border is broader and thicker, and the fabric is also coarser, making it less prone to wrinkles. You can even do away with the petticoat. I have also added a double palla and made the sari reversible, making it a bargain,” shares Jain, who now has a team of 30 weavers and has priced the saris from Rs 2,500 onwards.
Making the artisans come to terms with changing aesthetics has been a struggle. For instance, they would not work with black colour, as it was considered inauspicious. “We just can’t only have reds, maroons and mustards. I then made a batch of vegetable dye and dyed a bulk of yarn on my own,” says Jain, insisting that using more handloom fabrics and imbibing vegetable dyes is the way forward to ensure a greener future. “For me, the dye is as important as the weave. I know people worry about colour fastness with handloom, but I am working with a new technique where we use a natural enzyme called lodhra, which is extracted from leaves. It retains the warmth of the vegetable dye and is also environment- friendly. Hopefully, the patent will come through,” says Jain, who currently also teaches at Symbiosis Institute, Pune.
The exhibition is on till September 12 at Haat Studio, Meharchand Market
Publicado por salud equitativa en 6:15