Brick by Brick | The Indian Express

Brick by Brick | The Indian Express 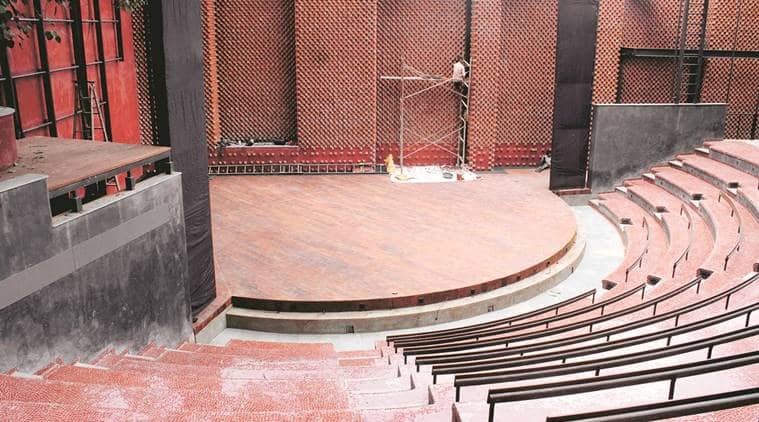 The renovated amphitheatre will maintain an ambient temperature through induced ventilation and cooling. (Express photo by Javed Raja)
Show me how would you run,” the teacher asks a young student, as she struggles to emote through dance on the marble-striped kota stone floor. The tapping of the baton on wood by the teacher, the pounding of the hammer by the carpenters at work, the whirr of the electric cutter, the strumming of the guitar, the faraway sound of the dholak blending with the chirping of birds are the sounds one hears in Natarani. This revamped amphitheatre in Ahmedabad opens its doors next week.
At the end of the long dance floor, partly open to the sky, is a huge black-and-white poster of renowned dancer Mrinalini Sarabhai. With Dr Vikram Sarabhai, her husband and father of India’s space programme, she began Darpana, an academy for performing arts, in 1949. Its amphitheatre, Natarani, will host a repertoire of performances on September 21.
When the Riverfront Road developed, Natarani was swallowed up, nearly 122 sqm of land was lost. In 2015, Darpana lost the case of reclaiming its land, and a few months later in 2016, Mrinalini passed away. “We lost Natarani and then we lost my mother. It was a time of death, a time of destruction. We had to choose whether to remain in that or redefine our vision, our dreams and ourselves because Amma’s legacy was not meant for us to be defeated. So yes, there is a sense of loss, but there’s also rebirth,” says Mallika. 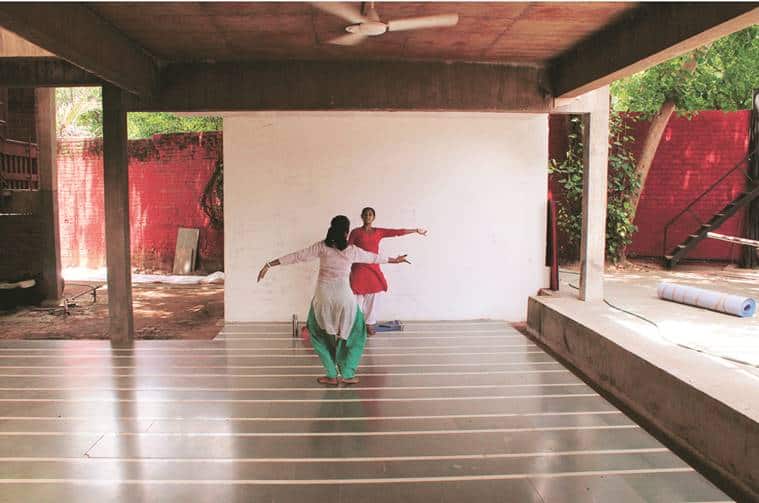 The dance floor has been named after Mrinalini Sarabhai, founder of Darpana. (Express photo by Javed Raja)
As Darpana celebrated its founder’s centenary this May, a new gallery was named after her. The only air-conditioned public space in this complex, it will host an interactive exhibition on Mrinalini’s life. To rebuild Natarani, they had to demolish the 1968 library-cum-dance studio built by architect Balkrishna Doshi. However, the main building, designed by architect Achyut Kanvinde in 1963, was left untouched. Mallika and Yadavan Chandran, Darpana’s artistic director, toured over a hundred theatres across the world to help redesign Natarani.
They commissioned architects Nimish Patel and Parul Zaveri of Abhikram to build Natarani’s most exotic feature — a seven metre wall. With its serrated bricks on the inside and curves lined with steel plates painted indigo on the riverside, it not only has become a popular photoshoot spot, but also cancels the traffic noise. Indigo, a dye produced in Ahmedabad in ancient times, and maroon are the signature colours of Darpanaand Natarani.
A 1.25 lakh litre tanka (underground sump) under the stage will collect rainwater. “Water from the tanka will be chilled and flowed underneath the China mosaic floor slab of the seating tiers,” says Mallika. Fresh air will circulate under the seat vents, which can be de-humidified for comfort. Zaveri redesigned the seating, turning it slightly diagonal to increase the capacity to 385 (earlier it could seat 250).
After Patel and Zaveri were done with the wall, Ahmedabad-based firm Indigo Architects, run by Uday and Mausami Andhare, was brought to build the plaza. Inspired by the ghats of Ujjain, it was built with lime and surkhi bricks, upcycled from the debris of the demolished buildings on site. “We wanted a theatre that would serve us and the city well, a space where anyone from the world can come,” says Mallika.
“I have personally watched over a hundred plays over the last two years to select the eight best for Natarani,” she says. These include Rajit Kapur’s One on One 2, a series of 10 monologues, and Faezeh Jalali’s 07/07/07, a story about an Iranian woman who was executed because she killed her rapist. “We have a piece called Item Number from Pune that is a sardonic look at item numbers,” says Mallika, who will herself perform with the Symphony Orchestra on the inaugural day. Darpana has tied up with Mumbai’s National Centre for the Performing Arts (NCPA) for the orchestra.
“I want to make Ahmedabad a cultural hub. What after all is a heritage city? It cannot be known just for its business skills,” says Mallika, adding, “Art that makes you think has to be showcased, and I truly believe that asking questions is part of the deepest Hindu heritage. The Upanishads are all questions. Anybody who says you can’t ask needs to re-think and re-touch their own roots.”
Publicado por salud equitativa en 6:56