Theatre on Bikes, an initiative by a Haryana group, Abhinay Rangmanch, is travelling 6,500 km performing plays in cities and villages 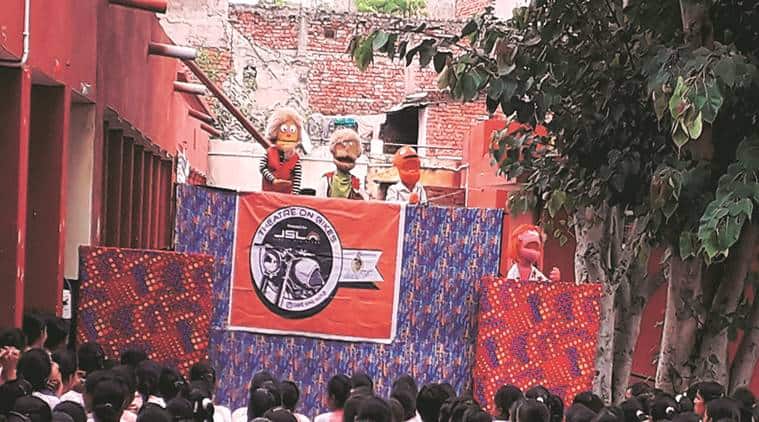 Muppets from the play Nisha
All the way from Hisar in Haryana, Nisha came by bike to tell Delhi her story. The Capital’s cultural district, Mandi House, was in the middle of evening rush hour when she made an appearance outside the Shri Ram Centre auditorium. A group of artists sitting around a tree, doing life sketches, were the first to stop and stare at her. The crowd from a chai shop were next to gather around. Passersby halted in their tracks. Nisha told them that her name means darkness. “But my ambition is as bright as sunlight,” she said clearly over microphones. Nisha is a muppet with a pink face and red hair and lives with a theatre group in Hisar, called Abhinay Rangmanch.
A group of four has brought the muppets, props, sets and music systems on Royal Enfilelds which are parked near the performance space and bear the sign “Theatre on Bikes”. Over the next six months, members of the group will travel 6,500 km, in phases, covering cities and small villages in Haryana, Punjab, Himachal Pradesh and Madhya Pradesh, to perform before audiences who do not go to halls. The performers ride in on bikes, put up screens for the shows and hook up music systems in public spaces or donated venues such as school-rooms.
The performance at Mandi House, named Nisha, dealt with the lead’s determination to study. The bobbing heads of her mother and father rattle out a series of chores, ignoring Nisha’s pleas to go to school. “Get food ready for your brother, he has an exam,” says her mother. “Why don’t I go and write his exam as well?” shoots back Nisha. The scene shifts to the corporate sector and the muppet faces acquire new identities — of male colleagues who are uncomfortable with a woman boss.
The muppets have distinctive faces and voices, and the group keeps the plot positive and devoid of pathos. Within a few minutes, the play is over but the crowd lingers around the players talking about issues facing women and young girls.
Over the phone from Hisar, Manoj Joshi, who has conceptualised the project, says, “For 18 years, I did proscenium shows. I like travelling and decided to combine both my loves.” Last year, in the first phase of the project, they had visited 20 cities and 70 villages. This year, they will revisit three or four of those villages to gauge the impact of previous shows.
Apart from Nisha, the plays presented by the bikers include Theatrewala, an optimistic tale about the struggles of artistes, Jaani Chor, which revolves around a Robin Hood-like folk figure of Haryana, and a play on hygiene for small children and young adults. Joshi also includes a segment on the vanishing street magic of India, such as changing rice grains to murmurs or getting a mango seed to grow into a tree in a jiffy.
Publicado por salud equitativa en 6:54