Girl Out of Line | The Indian Express

Girl Out of Line | The Indian Express

Girl Out of Line

“People, usually, men say, ‘She is a loose woman’, meaning her morals are a bit questionable. I feel that she isn’t loose enough. She needs to get looser,” says Maya Krishna Rao. 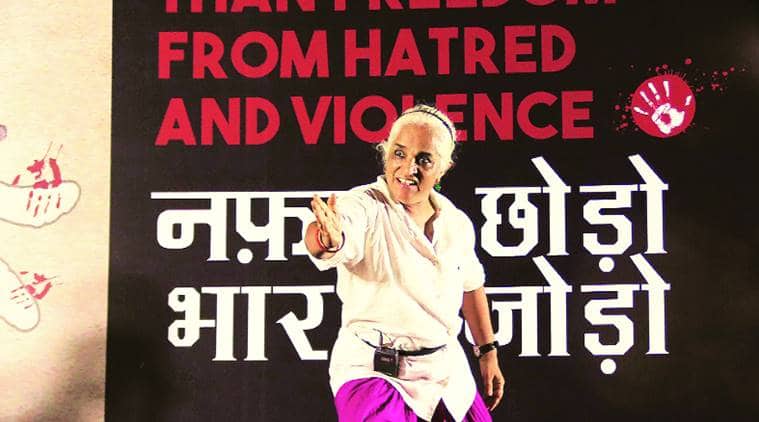 Maya Krishna Rao during a performance of Line photo: Afreen Gandhi.
In a room spread out with books, photographs, snacks, coffee mugs, a rocking chair and a dog named Chila, Maya Krishna Rao is creating a new play after seven years. Since she staged Walk in response to the Delhi Gang-Rape of 2012, and has presented pieces in response to lynchings and communal crimes, Rao has come to be identified with protest theatre across the country. Her new show, Loose Woman, is for the auditorium. “People, usually, men say, ‘She is a loose woman’, meaning her morals are a bit questionable. I feel that she isn’t loose enough. She needs to get looser,” says Rao, who returned her Sangeet Natak Akademi award in 2015 after the lynching of Akhlaque in Dadri and the killings of Narendra Dabholkar and Govind Pansare. Excerpts from an interview:
Who is a loose woman?
You can’t catch her. She is just a loose woman. You can only see her in the night. Having done Walk, which is about a woman becoming her fullest self when she scours and scans all the bylanes and corners of the city at different times of the day or night, I am having fun with this loose woman. When I say ‘loose woman’, I mean a generic category. The idea of loose woman covers men as well. The meaning is ‘loose’ — how do we push our own skin? In our minds, we may have politically correct stances but what does it mean in real life. The loose woman inside ourselves has many parts.
Does Loose Woman have a well-defined storyline?
I am trying to create an experience through different episodes. I don’t want to be prescriptive, and am just looking for ways to express the idea of a loose woman through images, music, theatre and dance coming together. If I say, ‘How short do you want to wear your shorts?’ it may not mean anything to a city woman because she has already crossed those lines. The other day, I was driving past (an area in Delhi) and I saw a girl in extra hot pants. So, the challenge is where and what nerve do you hit to bring out the idea of a loose woman. I am working with a guitar player and a singer on this.
Does your activity on the protest stage influence the play that you do off it?
After doing Walk, I had thought to myself that I should not get onto the protest platform too much because I may lose my own improvisational way of making theatre. I am actually finding that it is becoming the reverse. The more I am on the protest platform, I am pushing my own envelope as a performer. Events of protest are increasing and I am beginning to see that it is impacting the way we make performances, and on the way the imagination works differently in both scenarios.
You recently presented a new performance, tentatively called Line, at a Not In My Name event in Delhi. How has Line impacted Loose Woman?
It becomes a challenge for the artiste to take something you are making in the privacy of your studio and change it so that it speaks to a large audience, and is direct and moving. While I was making Loose Woman, I received a call to perform at Not In My Name. I pulled things out of Loose Woman, twisted it around and reconfigured it to take on the protest platform. But then, I come back to the privacy of the rehearsal room and I am a changed person because I have performed the piece before another set of people, many of who were directly affected by the issue we were protesting.
Your second piece of protest theatre, Not In My Name, was confrontational but Line used a lot of symbols, right from the beginning. Why the change?
I see myself as a theatre person. This is not agitprop theatre. I don’t want to be prescriptive.The challenge is how can one stand on the nukkad or the gol chakkar, and draw people into an experience? I call the first part of Line, ‘Rumble’, because that’s what it was for me. I come on stage as if I am being pushed and pulled in different direction—it is like ‘you want to take me here, but I want to go there’. Whether it is high-level politics or people’s ordinary lives, there was a lot of push and pull. From there, it moves to different kinds of lines that split lives apart, and of the need to rub away lines. There is a play on the word ‘rub’ — Rab is another name for Allah.
Loose Woman will be staged on Sept 14-16 at Oddbird Theatre in Chhattarpur, Delhi.
Publicado por salud equitativa en 7:14