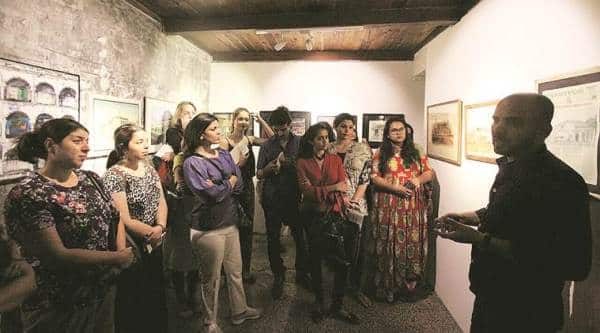 The show is called ‘Hamare Yahan’
Is there an enchantment in brick and stone? Poetry in the peeling paint and ageing walls of old houses or neighbourhoods, stories of people having lived within these walls? These and some other questions are being asked by a travelling show from Mysore at the TIFA Working Studios.
Curated by Shoaib Chadkan from Zero Eight 21, a collective of artistes from Mysore, the show does not just speak about the emotive value of these old spaces but also hopes to use art as an instrument for activism. What started off in different forms such as “Between Mysore to Mysooru” and “Heritage per Sq Ft.” and travelled to other cities like Hyderabad, Bangalore and Mumbai, the show is now called “Hamare Yahan”.
“It questions how how there has been a commodification of spaces with the real estate boom, not even the Tier II cities have escaped. From the socio-economic situation, we are observing the changes in built spaces and how this change intrudes on aspects of democracy, leads to city planning problems, affects people’s sense of a space. It changes the demography of a place. It shows how a cityscape change, when we get on this march towards industrialisation and how spaces get lost. Take Bangalore for example, it has lost a huge part of its comfort level, the people in the city who belong there feel alienated. We are not anti-growth but how we need to respect and have a dialogue with the locals and their spaces,” said Chadkan.
Films, an art performance, dramatic readings, a photo exhibition and more show people the emotional dimension to built spaces and intends to exercise public imagination in the service of the city. For Chadkan, it began with “From Mysore to Mysooru”, a project which he started while living in a century old building, The India Song House in Mysore, which was sold to a real estate firm and was set to undergo redevelopment.
Chadkan put out a picture of the house along with an emotional appeal on social media which led to a movement that eventually stopped the destruction of the house. It was this act which got him thinking that if one picture could achieve this end, then much more can be done, which is what led to Heritage per Sq Feet as well.
“It became an example of how art can become activism. We also realised that you cannot put a commercial value to spaces, emotional value is much more precious. Also heritage has become an upper-class word, it doesn’t have to be, it has to be very ordinary. In name of heritage, colonial and post-colonial structures are saved but what about wadas in Pune and chawls in Mumbai? Hence, we moved from heritage, which becomes an elitist thing to “Hamare Yahan”, which has public ownership and it becomes people’s own,” he adds.
The exhibition showcases artistes — Ayisha Abraham, Anil Chandran, Charlot Kryza, Amol K Patil, Samrat Chakrabarti, Sujan Ghosh, Vikas Urs, Naveen Kumar SM, Chandrakala MN Kala, Desai Somesh and Tanmay Santra. It can be viewed till September 9, 2pm to 7pm
Publicado por salud equitativa en 7:15