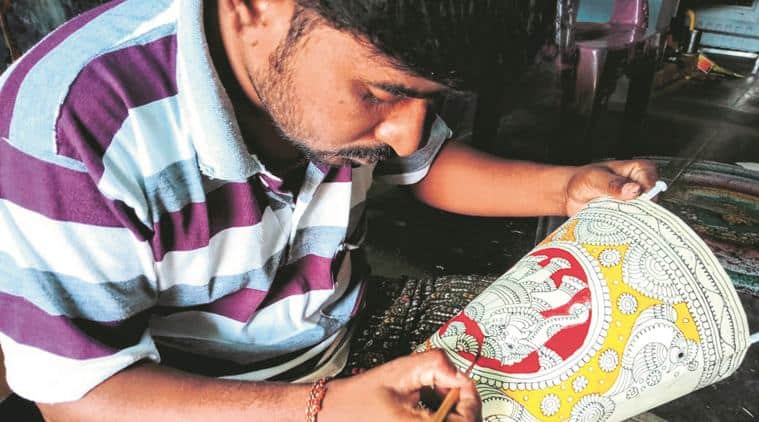 Sinde Sreeramullu in Pune
Written by Alex Michael Binoy
Inside one of the schools in Nimmalkunta village in Ananthapur district of Andhra Pradesh, a group of children sit with their eyes glued to the screen in front of them. On the screen, plays a story from Panchatantra, employing the centuries-old art form, Tholu Bommalata. Behind the screen, a person controls the movement of the puppets that are projected onto the screen with the help of a torch. Occasionally, a smile appears on his face, when he hears sounds of cheer coming from the kids watching the performance.
“I have been practising the art form of Tholu Bommalata for 10 years now. My father taught it to me when I was 15 and he was trained in the art from his father. Several generations in my family have been practitioners,” says Sinde Sreeramullu.
Tholu means leather and Bommalata means dancing puppets. It is a shadow puppet theatre tradition which only has a handful families as practitioners since centuries.The oldest story about this art form is of a person called Sree Krishna Devaranayanu, who used to travel across villages with this art. He used to play the Mahabharata and Ramayana through the medium of Tholu Bommalata. “The belief in those days was that this would bring rain to their villages. Predominantly, all our ancestors were farmers. So, rain was one of the most important things for us,” says Sreeramullu. Tholu Bommalata has been performed for centuries in the Southern part of India to play stories from ancient texts, such as the Mahabharata and Ramayana. However, the artiste rues that the opportunities to perform have dwindled, limited to few occasions when the state or district administration organises folk festivals. Hence, in an effort to keep the art and artistes alive, alternative forms, such as making lamps, wall hangings and so on have been taken up by the artisans. A leather lamp
Asked about whether the urban audience appreciate the true meaning and beauty of his art, he says, “Everyone thinks that people in cities buy these products just because of the looks, and don’t understand the story behind them. But when people come to buy products, they ask me about the story behind each product. I can see the genuine interest in their eyes when I tell them that a drawing on one of the products is a scene from Mahabharata or Ramayana. After I tell them the story behind four or five products, then they decide to buy the one which they are most interested in.”
Sreeramullu and his brother S Ramesh Babu are conducting workshops for making leather lamps in the Tholu Bommalata style in various locations in Pune, including Swargate, Viman Nagar, Model Colony and Baner. Till September 9
Publicado por salud equitativa en 6:40