The Call of the City | The Indian Express

The Call of the City | The Indian Express

The Call of the City

In the first show at its new location, Jhaveri Contemporary engages with Mumbai and its layered history. 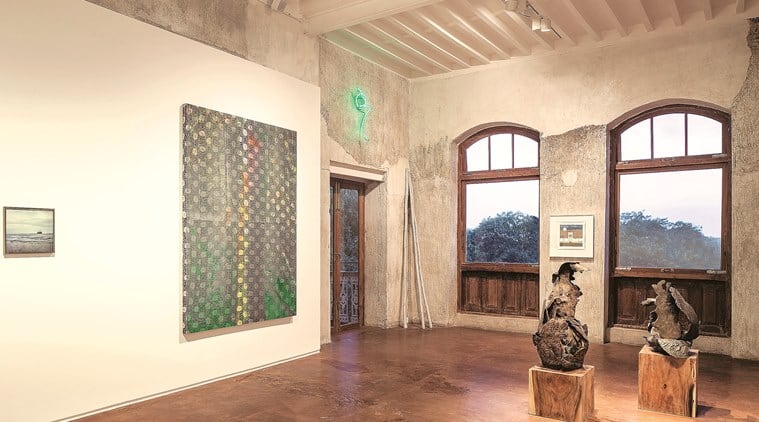 Jhaveri Contemporary gallery
Awash in the light pouring in from its large windows, Jhaveri Contemporary’s new gallery space has a markedly different feel from the white cube interior of its old location on Walkeshwar Road, Mumbai. In its old space, the gallery looked out towards the city from what might have seemed like a certain remove, perched as it was on one side of tony Malabar Hill. With its new location in Colaba, opposite two of Mumbai’s most recognisable landmarks — the Gateway of India and the Taj Mahal Palace and Hotel — Jhaveri Contemporary has planted itself firmly in the bustle and grime of the city and is keen to tap into its history and energy.
This expansion of intent comes through in the group exhibition with which the gallery opened its new chapter. Titled “What’s Essential”, the show features new and old works by artists who, gallerist Amrita Jhaveri says, “are essential to the DNA” of the gallery. “There are many reasons for the selection of works, and the exhibition is trying to do a few things simultaneously. The first is speak to our new location, the second is a look back at our brief history of exhibitions and our involvement with artists and the third is looking forward to what we might show in the new space,” she adds. 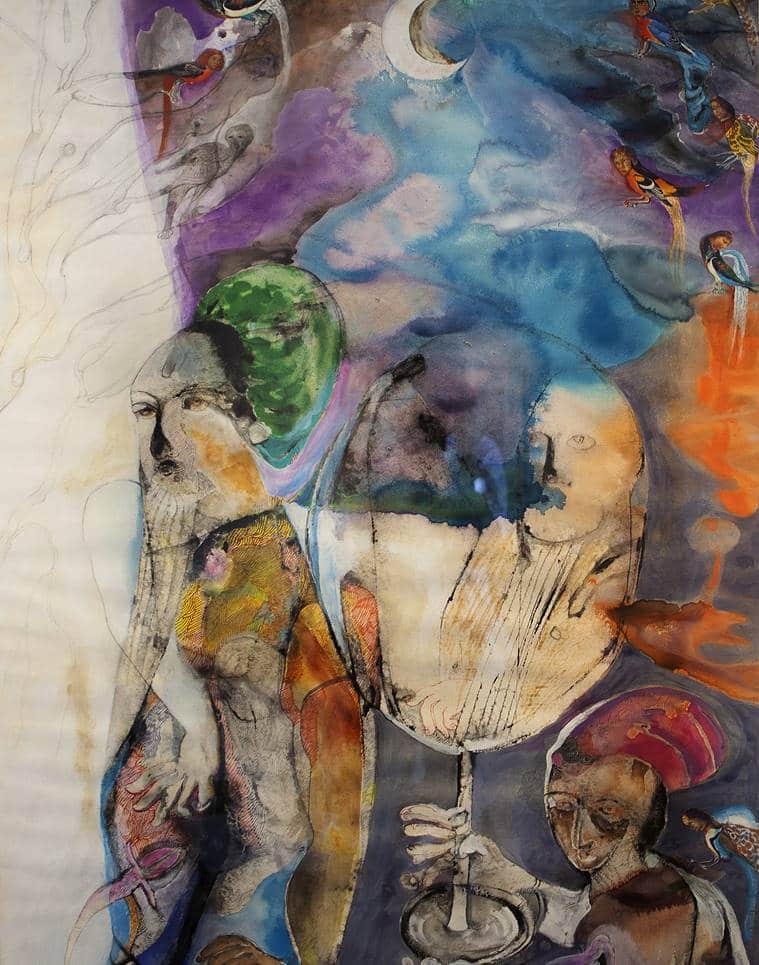 The Man, The Moon and The Mirror (Mohan Saman)t
What brings the works together is, as Jhaveri says, how many of them speak to the significance of the gallery’s new location. The stories or memories that the works evoke are as complex as the history of Colaba — and by extension, Mumbai — itself. Raghubir Singh’s Taj Mahal Hotel shows us the world-class hotel at home in a city of teeming millions. It is another perspective from which to view this extravagant architectural gesture which, as legend has it, was built to defy the racial segregation that the British practised in their hotels. 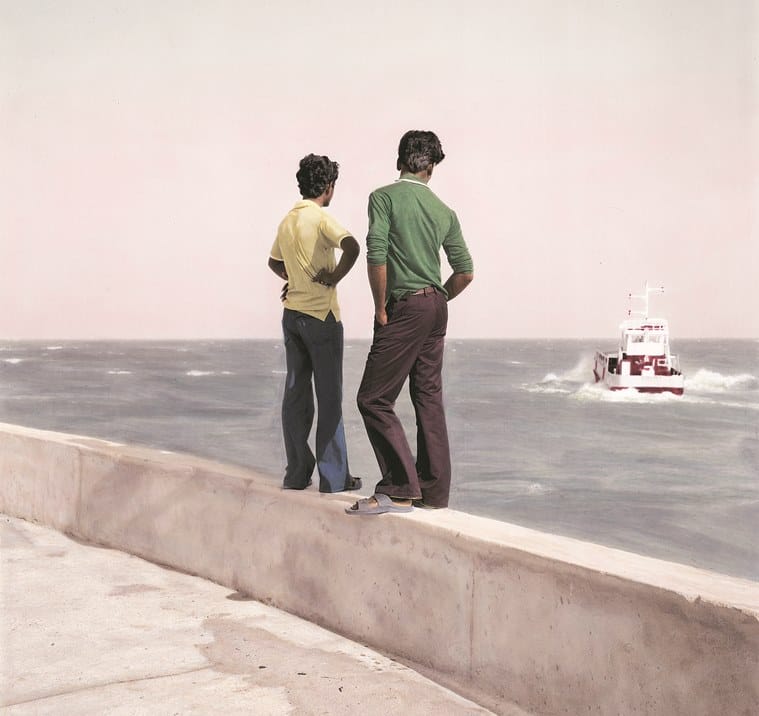 An Ocean of Uncertainty (Jhaveri Contemporary)
The monument that stands opposite the hotel, the Gateway of India, is depicted in Nalini Malani’s digital animation Now I See It Now I Don’t. As we watch a figure swim out to sea, the structure comes into view briefly, before it is overwhelmed by waves, and we’re back to the swimming figure. The arches of the Gateway also find an echo in Anwar Jalal Shemza’s Green on Orange, while the coconut palm, native to this island city, is seen in Lionel Wendt’s Swaying Palm Trees and Shezad Dawood’s Island I. The neon colours of the latter find another echo in Prem Sahib’s 24-7, which could itself be read as an homage to Mumbai’s famed round-the-clock habits. Even the humble bamboo stalk, ubiquitous in a city that is always growing, always repairing itself, finds a place, thanks to artist Gyan Panchal’s intervention. This sense of a growing city can also be read in Lubna Chowdhary’s Letting Loose. Could the whimsical shapes in the ceramic work represent the frequently bizarre, but always compelling veritiginous architectural fantasies of a city permanently starved for space?
Some of the most affecting works are the ones that offer multiple views of the sea and recall the many ways in which Mumbai interacts with her coastal location. Wendt’s Men Walking Along the Seashore could be an early depiction of what has become Mumbai’s favourite meditative pastime, while Vasantha Yoganathan’s An Ocean of Uncertainty and Simryn Gill’s Channel remind us that a significant population of the city still has its dreams and livelihood linked to the sea.
The exhibition will end on September 29.
Publicado por salud equitativa en 6:31