Travels with Tomes | The Indian Express

Travels with Tomes | The Indian Express

Two travelling bibliophiles have released an anthology of poetry from across the world. 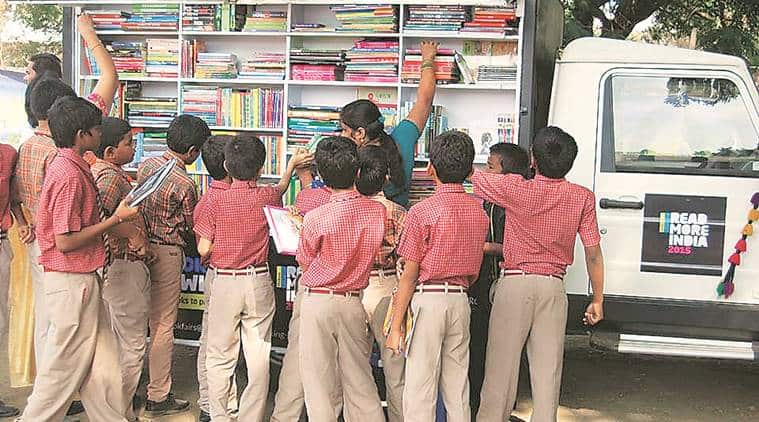 Schoolboys pick the stories they want to read.
It was a love for books that led Odisha-based Satabdi Mishra and Akshaya Bahibala to travel the country with a van full of tomes. Under the banner, “Walking Bookfairs”, they covered 10,000 km, carrying fiction and children’s literature to small towns and villages. Their new initiative is equally lyrical — an anthology of poetry titled 100 Poems Are Not Enough (Rs 299, Pan Macmillian, Walking Bookfairs).
“Books should reach more people and not just be limited to bigger cities. We want young people to read books apart from what their curriculum prescribes,” says Bahibala, who saw a lack of physical bookstores and libraries in small towns and villages, and wanted to fill the gap. The idea of a mobile library struck the duo in 2014, but they did not have a vehicle. They packed books in backpacks and cartons and travelled around the district of Koraput, using public transport. Soon, they bought a second-hand van and travelled through all the districts of Odisha. In 2017, they decided to cover the entire country, under the slogan, “Read More India”. Satabdi Mishra and Akshaya Bahibala
In three months, they drove their mobile library all the way to the tip of Kanyakumari, around south India, moving up on the west coast of Maharashtra and Gujarat, and went to Punjab, Himachal Pradesh and Uttarakhand. “One can find showrooms of all automobile companies in Chandigarh but there aren’t many bookstores in the city. Most of the stores in the country sell curriculum books and office stationary, but not much of literature,” he says, adding, “When we keep ourselves away from literature, we tend to not understand so many things; emotions like empathy and sympathy will come only by reading literature.”
They run a bookstore and coffee shop on Bhubaneswar’s Hospital Road. It started as a book shack in 2014, and moved to the present location in 2016. “It has been difficult running the store. The business has improved since then, but the readership has not. Only a few people can afford books,” he says. The bookstore gives heavy discounts the year round to encourage readers, and also runs a book club. The couple has been advocating differential pricing for tier-two cities. The bookstore, Walking Bookfairs, in Bhubaneswar
They have also started publishing their own books. 100 Poems Are Not Enough has 79 poets from India and abroad including that of award-winning writers Easterine Kire from Nagaland, Abubakar Adam Ibrahim from Nigeria, up-and-coming poets Maria Pomsaharova from Slovakia, Nadia Krøjgaard Eriksen from Denmark, Nicole Nies from Germany and Louise Kowitch from the US, as well as works by students, activists and common people.
The poems narrate a range of experiences such as discrimination of Dalits, gender, betrayal and longing in love, of war, nature and dreams.
A call was made a few months back by Walking Bookfairs, and people from all walks of life sent in entries. The book was published in May, but later, after a collaboration with Pan Macmillian, it got a bigger release this month. They are working on two more collections — short stories from across the country, and poetry on the city of Bhubaneswar.
Publicado por salud equitativa en 6:32