The Feminine Principle | The Indian Express

The Feminine Principle | The Indian Express

An exhibition chronicles the changing face of women in artist-pedagogue KG Subramanyan’s oeuvre. Untitled watercolours on paper from 2006.
I am by nature a fabulist. I transform images, change their character, make them float, fly, perform and tell a visual story. To that extent, my pictures are playful and spontaneous. I do occasionally build round a well-known theme, and give it new implications. The matysa avatar motif, for example, generates the vision of a fish goddess, symbolising elegance and grace or a conference of mermaids. It is unproductive to explain each image as it destroys the mystery of its birth,” said artist-pedagogue KG Subramanyan in conversation with art historian R Siva Kumar in 2014, two years before his death.
Placed as wall text next to his 2014 reverse painting Mermaids Face to Face, the words reflect his thought process from the very beginning of his engagements as an artist, especially in the manner in which his female protagonists altered over the years, which is the focus of the ongoing exhibition at Triveni Kala Sangam in Delhi. Titled “Women Seen and Remembered”, comprising the showcase are over 100 works, interspersed with poems on the walls. “I think there is a clear progression. He is going from women being just by themselves, more submissive at times or a more simplistic depiction, to an empowering nature with multiple layers,” says Tariq Allana, Associate Director, Art Heritage. 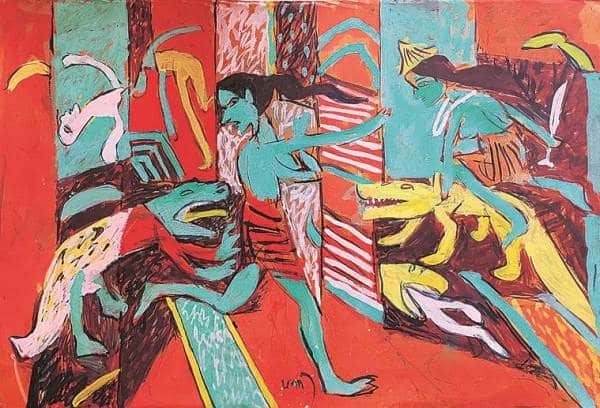 Curated primarily from the collection of the Seagull Foundation for the Arts, and with some works from the collection of theatre veteran and renowned art collector Ebrahim Alkazi, the chronological display commences from the early ’50s, when Subramanyan was a young art graduate from Santiniketan, who had recently joined as lecturer at the then newly established Faculty of Fine Art in MS University. The early drawings are studies of models. As Siva Kumar notes in the publication Women Seen and Remembered, “Their main aims being training in observation and an accurate rendering of the visible”.
In the following set, the female body is broken in numerous units, as if the master was developing a method of construction. “Subramanyan tends to underscore the joints and give a certain independence to the component parts, as if they were puppets or mannequins. This allowed him to manipulate each unit independently and with a certain freedom, especially the hand and its gestures,” notes Siva Kumar. In the 1970s, he adds, “The focus shifts from the language of art to the subject of art — in this case, woman, seen from the perspective of a male artist or male viewer”. So the watercolours have women more conscious of their bodies, moving to the ’80s, where the artist notes that a union between a male and female is not always pleasant or even suggests a non-platonic relationship between two women. Born in Kuthuparamba, North Malabar, Subramanyan might be more known for his socio-political commentary through art, which bridged the traditional and the modern, but the exhibition testifies that he depicted the complexities of the female mind and their multiple roles. The references are wide — if she appears as Durga in a ballpoint pen on paper work from the late ’80s, in the ’90s his women become masked entities that seem to have stepped out from Geek theatre. “For Subramanyan, the mask allows his figures to hover disquietingly between the worlds of reality and artifice, illusion and reality, the known and the unknown, even male and female. The masked person presents him/herself as a not completely definable entity, floating in an amorphous space,” reads the wall text. Another set of drawings from 2005 to 2007 are more corporeal.
Allana directs us to a rather unique series by Subramanyan painted in 2006, where he experiments with the image of the Virgin Mary in gouaches that depict her Annunciation. Mary is not majestic, like she has been portrayed in Renaissance Art, but an “ordinary woman”and angel Gabriel “as a diminutive man with butterfly wings, hovering over her with mischievous intentions”. Subramanyan, after all, was always building connections and playing the role of an “artist-activist”.
The exhibition is on at Shridharani Gallery and Art Heritage, Triveni Kala Sangam, Delhi, till September 9
Publicado por salud equitativa en 4:18