Janmashtami 2018: ‘Krishna is real, wholesome and lovable’ | The Indian Express

Janmashtami 2018: ‘Krishna is real, wholesome and lovable’ | The Indian Express Happy Janmashtami 2018 (Source: Dreamstime)
SEPTEMBER 3, 2018 BY ANURADHA VARMA
Hong Kong-based Bhakti Mathur, a banker by profession, who penned the popular Amma Tell me About series for children, which includes tales on Krishna, Raksha Bandhan and other Indian festivals. Here, she talks about why Janmashtami, the festival celebrating the birth of Krishna and mythological stories remain popular with kids.

What do you think draws children to Krishna?

Krishna is such a fascinating character, both for children and for adults for so many reasons. His name means the ‘dark one’ or the ‘one who attracts everyone’, which is very apt as he attracts birds, cows, children, all of nature and, of course, girls. He is loved in so many different forms. As a naughty child called Balgopal, he is always stealing butter, playing pranks and lying. So much so that he is also known as ‘Makhanchor’. But at the same time, he wins everyone’s hearts with his love and generosity. As a lover and protector of cows, he is known as ‘Gopala’ or ‘Govinda’. As a lover, he is known as ‘Mohan’, flirting with all the ‘gopis’, winning their hearts but having his heart won by his favourite Radha. As a flute player ‘Murlidhar’, he enchants women and all of nature. He’s also a friend, philosopher and guide to warrior Arjuna (in the epic Mahabharata).
In all his manifestations, he has so many imperfections. As a child, he steals, as a lover he has so many consorts, as a king he uses lies and deceit.  But these imperfections make him so real and wholesome, which is why he is so lovable.  I suppose, it would be wonderful if all of us could be complete with our imperfections, accept and love ourselves and others with their imperfections.

As a child, the story of Krishna’s birth used to fascinate me and it still does.  The part that I like the most is when, to escape from Kansa, Vasudev takes him across the Yamuna. It’s a stormy night and Vasudev is so scared.  Yet somehow he faces his fears and takes a step into the raging river. It is said that as soon as baby Krishna’s feet touched the water, the river parted and made way for him. There’s a lovely message in this that when we have the courage to face our fears with God in our minds and even take a small step in that direction, the path clears. Bhakti Mathur, author of the popular Amma Tell Me About series for children.

Any favourite childhood memory of celebrating the festival of Janmashtami?

My favourite memory of Janamashtmi as a child was going to a friend’s house whose family used to celebrate it very lovingly. We would take turns rocking the cradle with a thread strung with flowers. I loved that. And looking at the idol of baby Krishna.

I love the story of how Krishna fought with Kaliya, the snake, which in Hinduism represents our ego. The story is a metaphor for conquering and destroying our egos. That is why Krishna dances on him because he has no ego. Or why Vishnu sleeps on the Shesh Nag, because Vishnu has conquered his ego.

Tell us some facts about Janmashtami. For instance, why is it called so?

Janamashtami comes from two words—Janam that means birth and ashtami that means eight. The festival is named so because Krishna was born on the eighth day of the dark fortnight.

I do think kids have many more distractions these days with the internet and all sorts of gadgets. However, I also think there is a renewed focus on literacy and reading in schools and among parents. Instead of complaining about kids not reading, the first thing to ask ourselves is whether we, as parents, are reading. If our children don’t see us sitting quietly and enjoying a book, how can we expect them to? If we are cognizant of this and make reading a habit for ourselves and a part of their daily routine as well, I have no doubt that children will read, read and read some more. There are several traditions and folklores associated with Janmashtami. (Source: Dreamstime)
I think stories from mythology are a great parenting tool.

As a mother of two hyperactive young boys, who otherwise cannot sit still for a minute, I know that the only way I am going to hold their attention at bedtime is with a good story.  And stories from Indian mythology never fail me in this regard.

How can they? Which modern tale can boast characters of the stature of mythological ones—the gods incarnate, the mighty kings, the learned sages, and the fearsome demons? Or match the substance and the simple suspense of the plots as invariably a challenge, an obstacle or a difficult question is thrown at the protagonist and we are caught up in wondering what the resolution will be? I find them to be perfectly crafted stories and come to think of it, they have to be, as otherwise they could never have survived the ages, passed on from generation to generation, many a time in warm beds similar to ours, for thousands of years.

What are the values that stories from mythology teach kids?

But the bigger reason that I find myself going back to Indian mythology is that the stories serve as a wonderful parenting tool to highlight the values that we all want our children to imbibe. These are the universal values of courage, determination, perseverance, generosity and morality, of what is right versus wrong. There is a big difference in showing someone the way and telling them the way and these stories “show” the power of these values in a manner that is easily apprehensible and most of all, non-preachy. 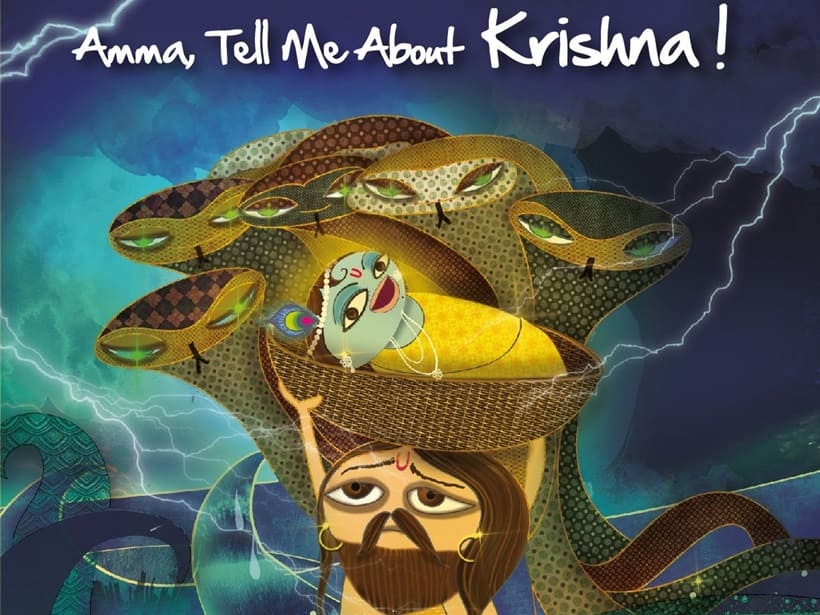 A book from the Krishna series by Bhakti Mathur

What prompted to write the series?

The motivation for writing the ‘Amma Tell Me’ series was to share with my sons the fascinating stories from Indian mythology that I had grown up with.  It was December 2010 and Holi was round the corner.  I was looking for a good book to explain the festival to my older son who was two years old then. But I found that there were no resources that were simple to understand and which captured the rich imagery of mythological India. So, I went ahead and started writing the stories in a style that I think kids find fun and non-preachy. I collaborated on the illustrations to bring out the imagery that I want my stories to convey.
I decided to make it a series and called it ‘Amma Tell Me’.  I set up my own publishing company and called it ‘Anjana Publishing’ (Anjana being the mother of my favourite God, the monkey God Hanuman).
I am excited about working with Penguin on the ‘Amma Take Me’ Series.  Penguin came up with the idea for this series. The series is designed and written for older children and is, therefore, a natural evolution for me not only as a writer, but also as a mother who has been dealing with questions about different religions and their places of worship as they have become part of my children’s school curriculum. In the same vein, I believe the series will be a natural evolution for my readers as well; the children and parents who have liked the “Amma Tell Me” series. These children are now older, they ‘self-read’, are more aware about religion and probably pester their parents with the same questions that I am pestered with!

“Amma Take Me” is therefore an attempt to answer these questions. Written as a travelogue of sorts, the series touches upon our major religions, their history and their mythology through the conversations of a mother and her two children as they visit India’s important places of worship.

The books are full of engaging stories and I’ve made every attempt to make sure they are ‘fun’ and ‘engaging’ and never ever ‘preachy’. The first two books in the series are on the Golden Temple and on Tirupati.

As an expat mom, is it a challenge to keep your kids connected to Indian culture? What is festival time like at home?

Yes, it is a challenge. This is true not just for immigrant parents but for all nuclear families—immigrant or non immigrant.  When I was a young schoolgirl, after I came home from school, my grandmother and my nanny would catch hold of me and tell me stories from Indian mythology for two hours every day! There was no Ipad or Iphone to get distracted with! Today, grandparents don’t stay with the grandchildren and there are way too many distractions. So we do have to work much harder to keep our children and ourselves connected to our roots.
Holi and Diwali are the two big festivals that we celebrate. The kids love it. Holi is celebrated on a beach with lots of other families, Indian and non-Indian. The kids love rubbing colour, running around, throwing water and just being naughty. Diwali is, of course, more festive and celebrated at most schools in Hong Kong. I go to my kids’ school and we read the Amma Tell Me book on Diwali, eat Indian snacks like samosas and ladoos. We make rangoli, the children wear bindis and we even do some Bollywood dancing!

Are you currently working on any new titles?

Yes! In the ‘Amma Tell Me’ series I launched the latest book ‘Amma Tell Me About Raksha Bandhan!’ in Mumbai in August. The next book is going to be on Shiva. In the ‘Amma Take Me’ Series the next book, the third one in the series is on the Dargah of Salim Chishti at Fatehpur Sikri. Penguin is planning to release it around Diwali.

Can you recommend any books on Indian mythology for kids?