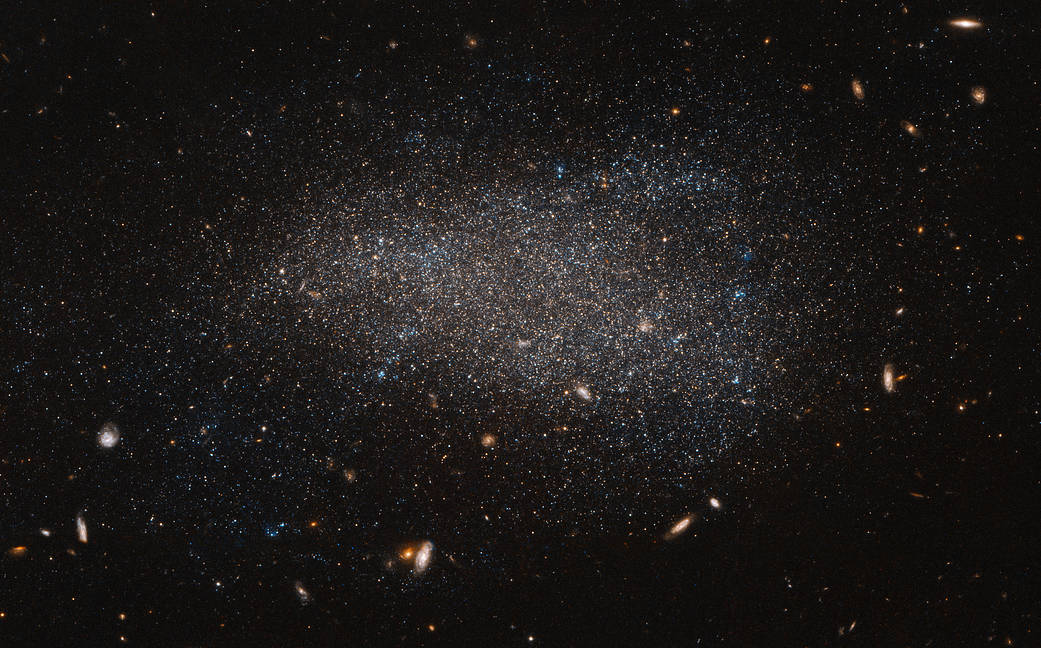 Got a stellar Hubble image on a t-shirt? Or maybe you’ve spotted a Hubble tattoo! Share your photos on Instagram, Twitter, Flickr and Facebook with #SpotHubble and maybe you’ll get a shout-out from @NASAHubble!
Learn More about #SpotHubble
This Hubble image shows NGC 4789A, a dwarf irregular galaxy in the constellation of Coma Berenices. It certainly lives up to its name — the stars that call this galaxy home are smeared out across the sky in an apparently disorderly and irregular jumble, giving NGC 4789A a far more subtle and abstract appearance than its glitzy spiral and elliptical cousins.
These stars may look as if they have been randomly sprinkled on the sky, but they are all held together by gravity. The colors in this image have been deliberately exaggerated to emphasize the mix of blue and red stars. The blue stars are bright, hot and massive stars that have formed relatively recently, whereas the red stars are much older. The presence of both tells us that stars have been forming in this galaxy throughout its history.
At a distance of just over 14 million light-years away NGC 4789A is relatively close to us, allowing us to see many of the individual stars within its bounds. This image also reveals numerous other galaxies, far more distant, that appear as fuzzy shapes spread across the image.
Image Credit: ESA/Hubble & NASA, Acknowledgements: Judy Schmidt (Geckzilla)Text Credit: European Space Agency
Editor: Rob Garner