NASA is Testing a Drill

to Search for Life on Mars 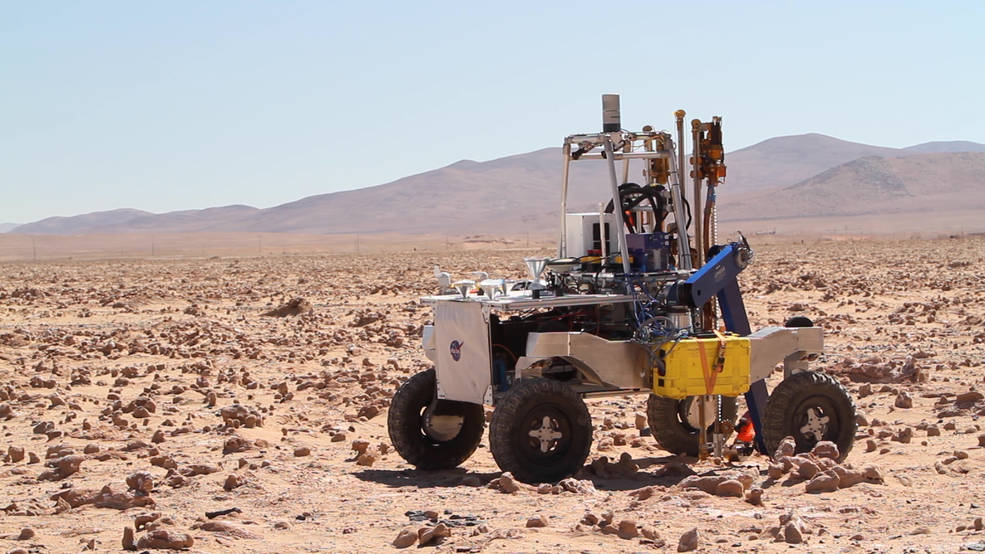 The ARADS rover on deployment in Chile's Atacama Desert in September 2019.
Credits: NASA/Campoalto/Victor Robles
NASA has barely scratched the surface of Mars – literally. While past rovers have dug inches into the rusty soils of the Red Planet, NASA is testing out a drill that can go feet deep and operate autonomously with minimal human guidance. Probing that far down below the harsh Martian surface will reveal a world we’ve never seen up close before – one where scientists believe there’s a chance for life.
This month, NASA is putting this drill through its paces in the driest, most Mars-like place that exists on Earth – the Atacama Desert in Chile. This drill, developed in partnership with Honeybee Robotics, is attached to a rover carrying a suite of instruments. These tools can analyze the soil samples dug up by the rover and discover potential biosignatures of microbial life. This project, the Atacama Rover Astrobiology Drilling Studies, or ARADS, is an important demonstration of NASA’s readiness to one day take these technologies to Mars on other missions beyond the upcoming Mars 2020.
“ARADS is all about preparing NASA to search for life on Mars,” said Brian Glass, principal investigator for the ARADS program at NASA’s Ames Research Center in California’s Silicon Valley. “Developing the science instruments and robotics we’ll need is a big part of that, and so is figuring out how we actually run the mission. The best way to practice that is to go and do it here on Earth.”
Preparing for Mars in the Driest Place on Earth
As NASA’s Artemis program prepares to return humans to the Moon by 2024, the agency has its longer term sights on Mars. Decades of robotic missions to Mars have shown that billions of years ago, Mars likely had oceans of water and a denser atmosphere – conditions that could have supported life.
Today, Mars’ surface is incredibly dry – with a thousand times less water than the driest parts of the Atacama. Glass and his team of engineers and scientists have travelled to the Atacama for the last four years to develop the capability to detect the remains of ancient life, or life that’s somehow eking out an existence underground.
This final deployment of the rover in the Atacama will test out its ability to conduct this complex science across the vast distance between Earth and Mars. A team of scientists are remaining at NASA Ames to operate a “mission control” room where they will analyze results from afar and then tell the rover where in the desert to dig. To pull this off, not only does NASA need a drill that can dig deeply, it needs to dig smartly.

The ARADS rover being unpacked and set up for deployment in Chile's Atacama Desert in September 2019.
Credits: NASA/Campoalto/Victor Robles
Drilling Hands-Free
Just like a hand drill can be prone to getting stuck as it bores down, so could a drill operating on another planet.  Also, cold temperatures could cause the drill to become frozen in place. A stuck drill could easily spell the end of a mission when the closest humans are millions of miles away. For Mars drills, autonomy isn’t a feature – it’s a requirement.
In order to operate without real-time human input, every motor on the drill is continuously collecting feedback. How much pressure the drill bit runs into, the movements of each motor – all of this is logged and interpreted by the drill allowing it to course-correct on the fly. If it runs into a tougher material, the drill bit can apply more force. If the drill gets stuck, it knows exactly where it is and how to dislodge itself. The result is a drill that is capable of digging through almost any material on its own, producing a soil sample regardless of the challenges it may face.
The upcoming Mars 2020 rover will use a different drill with similar autonomous capabilities, but won’t need to be nearly as versatile to reach its target depth of a couple inches down. When digging 20 times deeper than that, as the ARADS drill will do, working independently becomes essential.
“What’s unique about this drill is that it can take you from dirt to data, all on its own,” said Thomas Stucky, the sample-handling software lead for ARADS. “All the scientists have to do is point the rover to where it needs to dig, tell the drill how deep to go, and the drill will figure out the rest.” 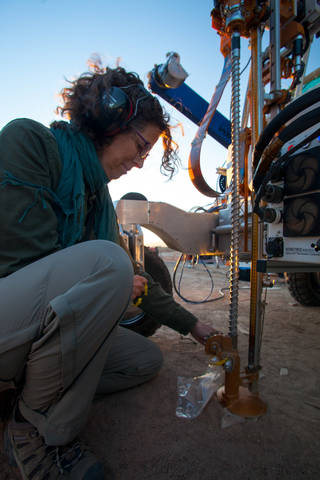 NASA systems engineer Arwen Davé inspecting the drill attached to the ARADS rover on a previous deployment to Chile's Atacama Desert in February 2018.
Credits: NASA/Campoalto/Victor Robles
Looking for Life Below the Surface
The data collected by the drill telling it how to operate in specific soil conditions can also inform where to look for life. At such depths do the soils get harder or softer, drier or wetter? Depending on how easily the drill can move through the soil, we can find out.
“If there’s any life on Mars’ subsurface, it’s likely in the form of microbes struggling to live off very trace amounts of water in soil or salt layers,” said Arwen Davé, systems engineer for ARADS. “Based on what the drill can tell us about the soil, we can detect where those layers are, maybe even leading us to where the life is.”
This same autonomous drill may also end up on the Moon as part of NASA’s goal to locate water and other resources on our nearest neighbor to support a sustainable, long-term human presence in deep space.
With a “hands-free” drill in its toolbox, NASA aims to uncover the hidden worlds just beneath the surfaces of other planets. There, we may find the secrets to living beyond Earth – for us or any other lifeforms we hope to find.
Additional resources:
For news media:
For more information about this subject, please contact the NASA Ames newsroom.
Author: Frank Tavares, NASA's Ames Research Center
Editor: Frank Tavares
Publicado por salud equitativa en 13:37