A Stellar Circle of Life | NASA

A Stellar Circle of Life 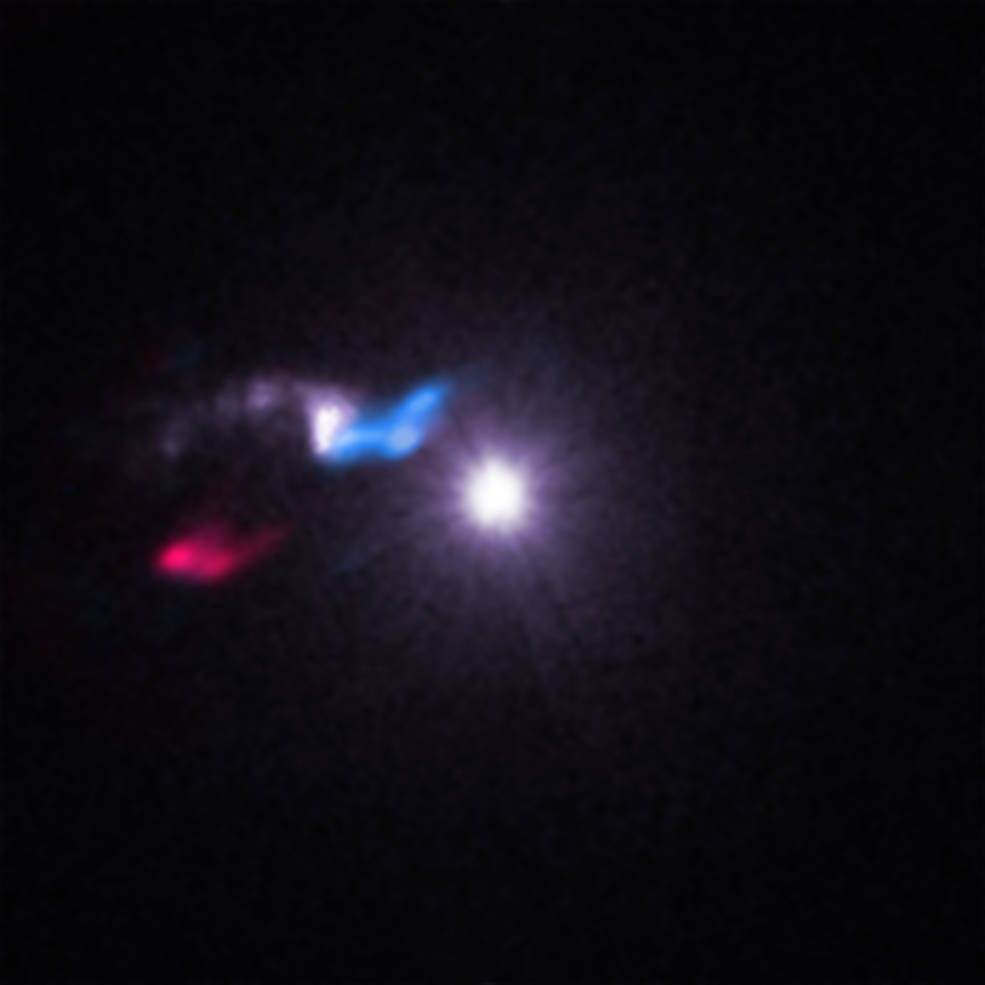 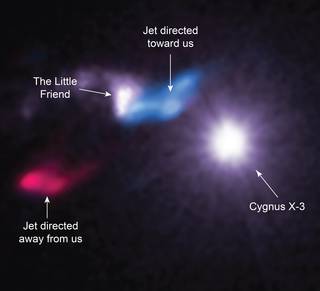 Cygnus X-3 is an X-ray binary where a compact source is pulling material away from a massive companion star. Chandra's high-resolution X-ray vision revealed a cloud of gas and dust that is a separated by a very small distance from Cygnus X-3. This gas cloud, dubbed the "Little Friend," is a Bok globule, the first ever detected in X-rays and the most distant one ever discovered. Astronomers detected jets produced by the "Little Friend", showing that a star is forming inside it.
Credits: X-ray: NASA/CXC/SAO/M.McCollough et al, Radio: ASIAA/SAO/SMA
A snapshot of the stellar life cycle has been captured in a new portrait from NASA’s Chandra X-ray Observatory and the Smithsonian’s Submillimeter Array (SMA).  A cloud that is giving birth to stars has been observed to reflect X-rays from Cygnus X-3, a source of X-rays produced by a system where a massive star is slowly being eaten by its companion black hole or neutron star. This discovery provides a new way to study how stars form.
In 2003, astronomers used Chandra’s high-resolution X-ray vision to find a mysterious source of X-ray emission located very close to Cygnus X-3. The separation of these two sources on the sky is equivalent to the width of a penny at a distance of 830 feet away. In 2013, astronomers reported that the new source is a cloud of gas and dust.
In astronomical terms, this cloud is rather small – about 0.7 light years in diameter. Astronomers realized that this cloud was acting as a mirror, reflecting some of the X-rays generated by Cygnus X-3 towards Earth.
“We nicknamed this object the ‘Little Friend’ because it is a faint source of X-rays next to a very bright source that showed similar X-ray variations,” said Michael McCollough of the Harvard-Smithsonian Center for Astrophysics (CfA) in Cambridge, Massachusetts, who led the most recent study of this system.
The Chandra observations reported in 2013 suggested that the Little Friend had a mass between two and 24 times that of the Sun. This suggested that the cloud was a “Bok globule,” a small dense cloud where infant stars can be born. However, more evidence was needed.
To determine the nature of the Little Friend, astronomers used the SMA, a series of eight radio dishes atop Mauna Kea in Hawaii. The SMA found molecules of carbon monoxide, an important clue that the Little Friend is indeed a Bok globule. Also, the SMA data reveals the presence of a jet or outflow within the Little Friend, an indication that a star has started to form inside.
“Typically, astronomers study Bok globules by looking at the visible light they block or the radio emission they produce,” said co-author Lia Corrales of the Massachusetts Institute of Technology in Cambridge, Mass. “With the Little Friend, we can examine this interstellar cocoon in a new way using X-rays – the first time we have ever been able to do this with a Bok globule.”
At an estimated distance of almost 20,000 light years from Earth, the Little Friend is also the most distant Bok globule yet seen.
The properties of Cygnus X-3 and its proximity to the Little Friend also give an opportunity to make a precise distance measurement – something that is often very difficult in astronomy. Since the early 1970s, astronomers have observed a regular 4.8-hour variation in the X-rays from Cygnus X-3. The Little Friend, acting as an X-ray mirror, shows the same variation, but slightly delayed because the path the reflected X-rays take is longer than a straight line from Cygnus X-3 to Earth.
By measuring the delay time in the periodic variation between Cygnus X-3 and the Little Friend, astronomers were able to calculate the distance from Earth to Cygnus X-3 of about 24,000 light years.
Because Cygnus X-3 contains a massive, short-lived star, scientists think it must have originated in a region of the Galaxy where stars are still likely to be forming. These regions are only found in the Milky Way’s spiral arms. However, Cygnus X-3 is located outside any of the Milky Way’s spiral arms.
“In some ways it’s a surprise that we find Cygnus X-3 where we do,” said co-author Michael Dunham of CfA and the State University of New York at Fredonia. “We realized something rather unusual needed to happen during its early years to send it on a wild ride.”
The researchers suggest that the supernova explosion that formed either the black hole or neutron star in Cygnus X-3 kicked the binary system away from its original birthplace. Assuming that Cygnus X-3 and the Little Friend formed near each other, they estimate that Cygnus X-3 must have been thrown out at speeds between 400,000 and 2 million miles per hour.
A paper describing these results appeared in a recent issue of The Astrophysical Journal Letters and is available online. NASA’s Marshall Space Flight Center in Huntsville, Alabama, manages the Chandra program for NASA’s Science Mission Directorate in Washington. The Smithsonian Astrophysical Observatory in Cambridge, Massachusetts, controls Chandra’s science and flight operations.
Read More from NASA's Chandra X-ray Observatory.
For more Chandra images, multimedia and related materials, visit:
http://www.nasa.gov/chandra
Molly PorterMarshall Space Flight Center, Huntsville, Ala.256-544-0034molly.a.porter@nasa.gov
Megan WatzkeChandra X-ray Center, Cambridge, Mass.617-496-7998mwatzke@cfa.harvard.edu
Editor: Lee Mohon