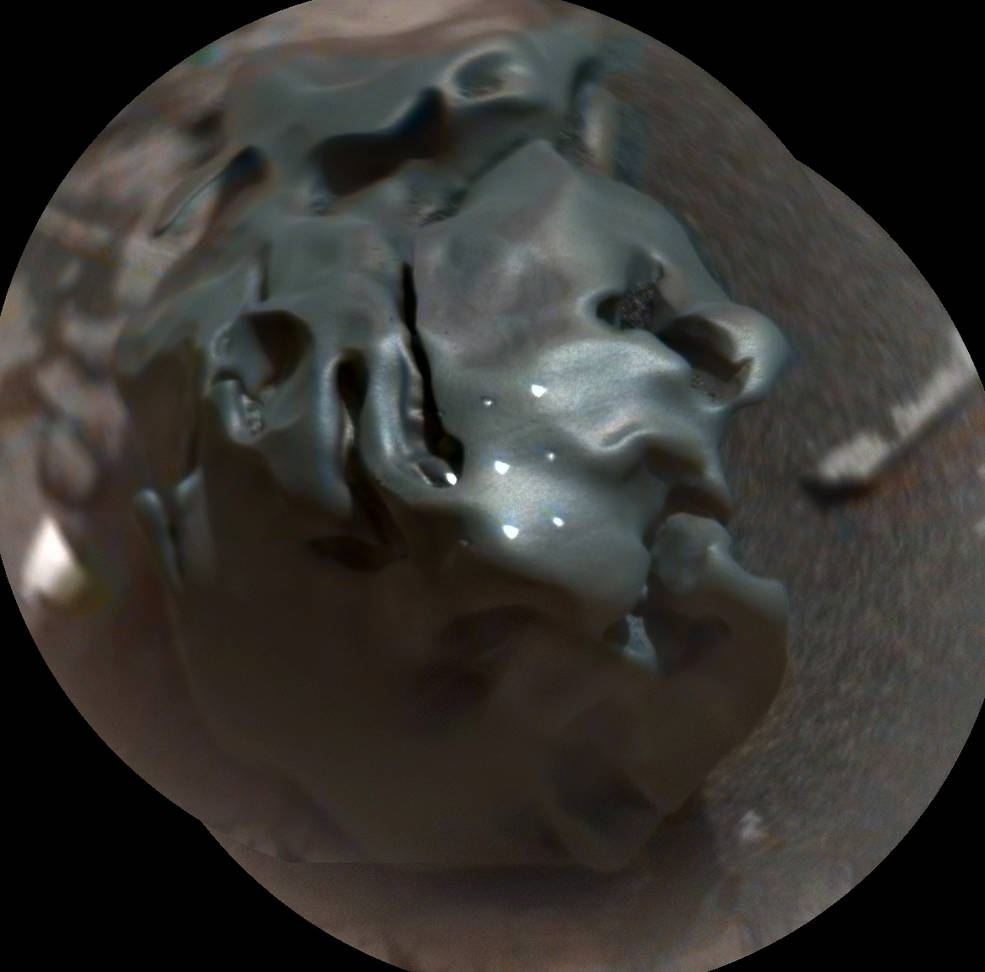 The dark, golf-ball-size object in this composite, colorized view from the ChemCam instrument on NASA's Curiosity Mars rover is a nickel-iron meteorite, as confirmed by analysis using laser pulses from ChemCam on Oct. 30, 2016.
Credits: Credit: NASA/JPL-Caltech/LANL/CNES/IRAP/LPGNantes/CNRS/IAS/MSSS
Full image and caption 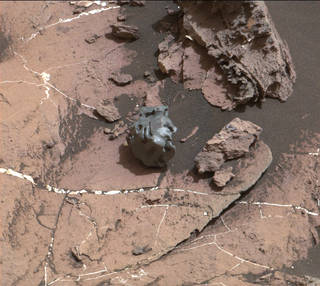 The dark, smooth-surfaced rock at the center of this Oct. 30, 2016, image from the Mast Camera (Mastcam) on NASA's Curiosity Mars rover was examined with laser pulses and confirmed to be an iron-nickel meteorite. It is about the size of a golf ball.
Credits: Credit: NASA/JPL-Caltech/MSSS
Full image and caption
Laser-zapping of a globular, golf-ball-size object on Mars by NASA's Curiosity rover confirms that it is an iron-nickel meteorite fallen from the Red Planet's sky.
Iron-nickel meteorites are a common class of space rocks found on Earth, and previous examples have been seen on Mars, but this one, called "Egg Rock," is the first on Mars examined with a laser-firing spectrometer. To do so, the rover team used Curiosity's Chemistry and Camera (ChemCam) instrument.
Scientists of the Mars Science Laboratory (MSL) project, which operates the rover, first noticed the odd-looking rock in images taken by Curiosity's Mast Camera (Mastcam) at at a site the rover reached by an Oct. 27 drive.
"The dark, smooth and lustrous aspect of this target, and its sort of spherical shape attracted the attention of some MSL scientists when we received the Mastcam images at the new location," said ChemCam team member Pierre-Yves Meslin, at the Research Institute in Astrophysics and Planetology (IRAP), of France's National Center for Scientific Research (CNRS) and the University of Toulouse, France.
ChemCam found iron, nickel and phosphorus, plus lesser ingredients, in concentrations still being determined through analysis of the spectrum of light produced from dozens of laser pulses at nine spots on the object. The enrichment in both nickel and phosphorus at some of the same points suggests the presence of an iron-nickel-phosphide mineral that is rare except in iron-nickel meteorites, Meslin said.
Iron meteorites typically originate as core material of asteroids that melt, allowing the molten metal fraction of the asteroid's composition to sink to the center and form a core.
"Iron meteorites provide records of many different asteroids that broke up, with fragments of their cores ending up on Earth and on Mars," said ChemCam team member Horton Newsom of the University of New Mexico, Albuquerque. "Mars may have sampled a different population of asteroids than Earth has."
In addition, the study of iron meteorites found on Mars -- including examples found previously by Mars rovers -- can provide information about how long exposure to the Martian environment has affected them, in comparison with how Earth's environment affects iron meteorites. Egg Rock may have fallen to the surface of Mars many millions of years ago. Researchers will be analyzing the ChemCam data from the first few laser shots at each target point and data from subsequent shots at the same point, to compare surface versus interior chemistry.
Egg Rock was found along the rover's path up a layer of lower Mount Sharp called the Murray formation, where sedimentary rocks hold records of ancient lakebed environments on Mars. The main science goal for Curiosity's second extended mission, which began last month, is to investigate how ancient environmental conditions changed over time. The mission has already determined that this region once offered conditons favorable for microbial life, if any life ever existed on Mars.
Curiosity was launched five years ago this month, on Nov. 26, 2011, from Cape Canaveral Air Force Station, Florida. It landed inside Gale Crater, near the foot of Mount Sharp, in August 2012.
The rover remains in good condition for continuing its investigations, after working more than twice as long as its originally planned prime mission of about 23 months, though two of its 10 science instruments have recently shown signs of potentially reduced capability. The neutron-generating component of Curiosity's Dynamic Albedo of Neutrons (DAN) instrument, designed for working through the prime mission, is returning data showing reduced voltage. Even if DAN could no longer generate neutrons, the instrument could continue to check for water molecules in the ground by using its passive mode. The performance of the wind-sensing capability from Curiosity's Rover Environmental Monitoring Station (REMS) is also changing, though that instrument still returns other Mars-weather data daily, such as temperatures, humidity and pressure. Analysis is in progress for fuller diagnosis of unusual data from DAN, which was provided by Russia, and REMS, provided by Spain.
The U.S. Department of Energy's Los Alamos National Laboratory in Los Alamos, New Mexico, developed ChemCam in partnership with scientists and engineers funded by the French national space agency (CNES). Mastcam was built by Malin Space Science Systems, San Diego. NASA's Jet Propulsion Laboratory, a division of Caltech in Pasadena, California, manages the Mars Science Laboratory Project for the NASA Science MIssion Directorate, Washington, and built the project's Curiosity rover. For more information about Curiosity, visit:
http://mars.jpl.nasa.gov/msl
Guy WebsterJet Propulsion Laboratory, Pasadena, Calif.818-354-6278guy.webster@jpl.nasa.gov
Dwayne Brown / Laurie CantilloNASA Headquarters, Washington202-358-1726 / 202-358-1077dwayne.c.brown@nasa.gov / laura.l.cantillo@nasa.gov
2016-287
Editor: Martin Perez