With Every First in Space, New Dreams Are Launched | NASA

With Every First in Space, New Dreams Are Launched | NASA

With Every First in Space, 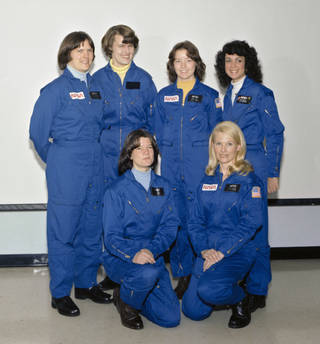 The first six women selected to be NASA astronauts: (back row, left to right) Kathryn Sullivan, Shannon W. Lucid, Anna L. Fischer, Judith Resnik, (seated left to right) Sally K. Ride and M. Rhea Seddon.
Credits: NASA
In 1978, Peggy Whitson was a senior at Mt. Ayr Community High School in Iowa, preparing for graduation before heading to Iowa Wesleyan College to earn a Bachelor of Science degree in Biology and Chemistry. Today among her numerous records, she is the U.S. astronaut with the most cumulative time spent in space, an accomplishment made possible by NASA’s selection her senior year of high school on Jan. 16, 1978, of its first diverse class of astronauts, including the first women, first African-American, and first Asian-American astronauts. In a “Letter to her younger self,” Whitson shared how that selection launched her dreams of exploration and 10 years of applying to become an astronaut before she was selected.
Image feature: Photos of the all of the astronaut class of 1978
When NASA made its selection of that first diverse class, nine years had passed since the last astronaut selection, during which time the Apollo program also had been brought to a close. NASA was preparing for a new era of human spaceflight using the yet-to-fly space shuttles, which could accommodate as many as six mission specialist astronauts in addition to the pilot and commander who would fly it. Previously, other than a handful of scientist astronauts, NASA only selected astronauts with military jet pilot experience, all of whom were men. With the addition of mission specialists, they opened the position to women and also sought a broader range of candidates who were scientists and engineers.
When those first six women joined the astronaut corps in 1978, they made up nearly 10 percent of the active astronaut corps. In the 40 years since that selection, NASA has selected its first astronaut candidate class with equal numbers of women and men, and women now comprise 34 percent of the active astronauts at NASA. The first African American and first Asian American astronauts added six percent racial diversity to the astronaut corps. Today, African American, Asian, Pacific Islander, Hispanic, and multi-racial astronauts are 24 percent of NASA’s active astronaut corps.
Those astronauts have achieved numerous milestones and firsts in spaceflight and spacewalking and proudly represent their diverse heritage. Today every NASA mission is conducted aboard the International Space Station, with crews representing the 15 different countries that work together to advance exploration in low-Earth orbit. Achieving ambitious future deep space exploration goals like sending humans to Mars will be realized as part of a global effort, requiring the best research, technologies, capabilities and contributions from the U.S. and international partners.
With every “first” in space, new dreams are launched, and new explorers begin their journeys. Some become astronauts while others advance exploration in myriad roles as scientists, engineers, technologists and the diverse fields that enable our journeys farther into our universe. NASA embraces the legacy of that first diverse astronaut class as well as the African-American female “computers” who were essential to the success of early spaceflight and strives to include everyone who wants to participate in its ongoing exploration.
As the agency returns to the Moon and paves the way for human exploration deeper into the solar system, including Mars, NASA seeks to continue to spark the imagination of young people. Recently, NASA collaborated with American Girl to ensure the accuracy of its latest doll, 11-year-old aspiring astronaut Luciana Vega. Perhaps a student who sees more examples of diverse scientists and space explorers will be the one to realize their dreams and set new records on a mission to Mars.
Editor: Brian Dunbar
Publicado por salud equitativa en 6:42