Keep your distance – health lessons from the history of pandemics

by The Editorial TeamPublished on: 8th April 2020

From a simple cold to a serious illness, humans have always lived with the risk of catching diseases from one another. Pandemics affecting millions are fortunately rare, but the bubonic plague of the 14th century and the 1918 influenza outbreak have left a dark shadow on history.

Editorial Note: Extracted from “1001 Inventions: The Enduring Legacy of Muslim Civilization Reference (4th Edition) Annotated”. First published in 1001 Inventions website – www.1001inventions.com/health-lessons
***
From a simple cold to a serious illness, humans have always lived with the risk of catching diseases from one another. Pandemics affecting millions are fortunately rare, but the bubonic plague of the 14th century and the 1918 influenza outbreak have left a dark shadow on history.
During Muslim civilisation, people encountered plague and infectious diseases such as leprosy – but how did physicians then deal with issues of contagion? And are there any lessons we can learn? A key medical principle from the early days of Muslim civilisation was preventative medicine – sensible guidance for people of all ages on keeping well.
Physicians stressed in their medical works the importance of sport, personal hygiene, healthy eating and drinking, and good sleep. They encouraged positive management of worry, anger and anxiety, believing that the health of the body had a close link with the health of the soul.
Examples of those physicians include Al-Razi in his book (Kitab Manafiʿ al-Aghdhiyah wa-Dafʿi Madharriha), and sections of Ibn Sina’s Canon of Medicine. 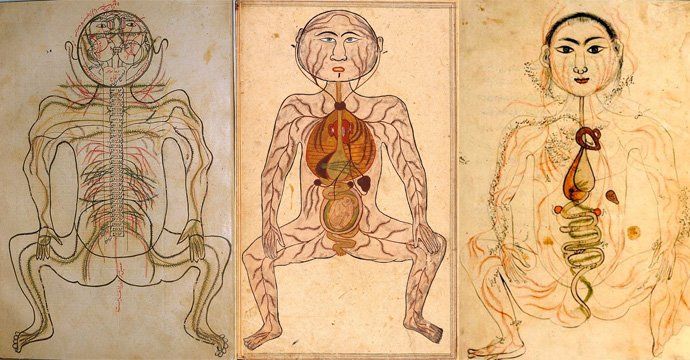 Similar manuscripts of work on anatomy contained illustrated chapters on five systems of the body: bones, nerves, muscles, veins and arteries. This page depicts the arteries, with the internal organs shown in watercolors… (Source)

‘Flee from the one with leprosy as you flee from a lion,’ cautioned the 14th-century theologian and physician Ibn Qayyim al-Jawziyyah, in reference to a saying of the Prophet Mohammed. In cases of contagious diseases such as leprosy, doctors knew that the only way to avoid transmission was by steering clear of a sick person.
In his book al-Ṭibb al-Nabawi (The Medicine of the Prophet) Ibn Qayyim identified how disease transmits through contact with a sick person or via their breath.

Umayyad Caliph Walid ibn ʿAbd al-Malik built the first Bīmāristān (hospital) in Muslim civilisation in the year 707 in Damascus. In this hospital, lepers were cared for in a separate ward and provided with regular supplies, measures designed to avoid patients infecting others.

Caricature by the English artist James Gillray (1757-1815) The Cow-Pock or the Wonderful Effects of the New Inoculation! (London, 1802) depicting a vaccination scene at the Smallpox and Inoculation Hospital at St. Pancras, showing Dr. Jenner vaccinating a frightened young woman and cows emerging from different parts of people’s bodies (Source) (1001 inventions: The Enduring Legacy of Muslim Civilization, 3rd edition, Page 176)

Guidance in relation to epidemics was not to enter or leave a land affected by the disease. 14th-century Andalusian physician and scholar Abu Jaʿfar Amad ibn ʿAli ibn Khatima al-Ansari followed this guidance appropriately when he stayed put in the city of Almeria after it was struck by bubonic plague. He made the most of his confinement, however, by investigating the nature of the disease and its spread, as well as tending to patients. His findings are recorded in his book Tahsil Gharad al-Qasd fi Tafsil al-Marad al-Wafid (The fulfilment of the Inquirer’s Aim Concerning All About the Invading Epidemic).
One of Ibn Khatima’s insights was that diet, and the strength of the body’s resistance, play a role in how severe the impact is and how quickly a patient will respond to treatment.

As the world grapples once again with a pandemic, there is a notable resonance with the past. Physicians in Muslim civilisation sought to provide the best care and advice they could during epidemics and outbreaks of infectious diseases, and today the guidance given by governments and health practitioners across the world is remarkably similar.
After all, the notion of medicine is about preserving health and saving lives.

Medicine is a science, from which one learns the state of the human body, in order to preserve good health when it exists and restore it when it is lacking.” 11th century physician and scholar Ibn Sina 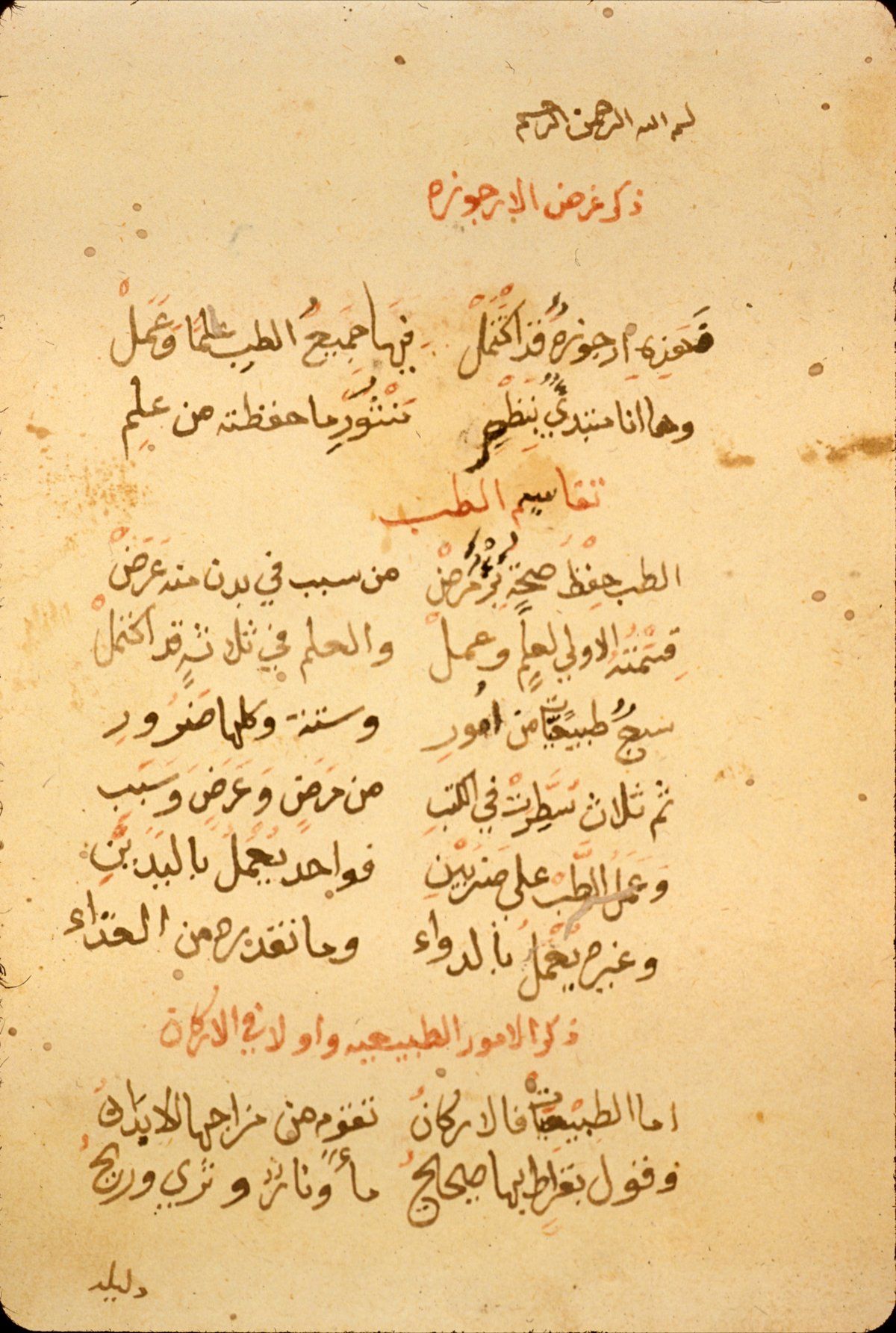 The opening of the popular didactic poem on medicine by Ibn Sīnā (Avicenna). The copy is undated, possibly 17th century. (Source) The end of a plague tract that, according to the colophon shown here, was completed on 19 Rabi‘ II 944 (= 26 September 1537). The author is apparently the same as the Malakite theologian Abū ‘Abd Allāh Muḥammad ibn Muḥammad ibn al-Ḥaṭṭāb al-Malikī al-Ru‘aynī who died in 1547/954. The undated copy appears to have been made during the author’s lifetime and is possibly in his own hand. (Source)
Publicado por salud equitativa en 10:47