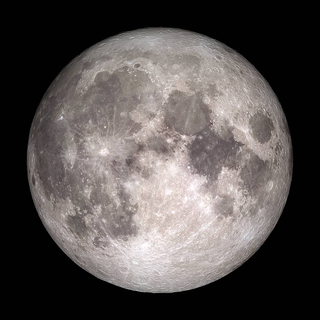 See the phases of the moon and other videos in 4K.
Credits: NASA
NASA's UHD Channel
Latest Additions
Rocket Science In 60 Seconds Videos -- Short videos about the spacecraft that will return astronauts to the Moon by 2024.
No Small Steps Videos -- NASA’s new rocket, the Space Launch System, be the most capable rocket ever built.
Featured Videos
Artemis: NASA's Moon to Mars Plans -- We are NASA, and we are going to the Moon. This series of videos explains how.
#AskNASA -- NASA experts answer your questions about space exploration, science and aeronautics.
#BeAnAstronaut -- Our newest class of astronauts will journey to the Moon, Mars and beyond. In their own words, here’s what it means to be part of the #Artemis Generation.
Documentaries -- Enjoy longform video from NASA TV on the Hubble Space Telescope, New Horizons' flyby of Pluto, the Apollo missions and more.
NASA at Home Videos
Asteroid "Close Approach" -- how close is an asteroid when it makes a "close approach" to Earth? Here's an activity you can do at home that will show you that "close" doesn't always mean the same thing in space as it does here on Earth.
Make Your Own Cloud (in a Bottle) -- By experimenting with temperature and pressure, you can make your own cloud appear in a bottle in this simple demonstration.
General or Multiple Topics
Elmo Visits NASA -- the Sesame Street character learns about the space agency.
Learning Space -- videos on several topics, including do-it-yourself projects.
Life at the Lab -- Advanced concepts and technologies from NASA's Langley Research Center in Hampton, Virginia, in space exploration, aeronautics and Earth science.
NASA TV's UHD Playlist -- NASA in 4K.
NASA 2020: Are You Ready? -- Launching Americans from U.S. soil, sending a new rover to Mars and continuing to prepare for human missions to the Moon are just a few of the things NASA has planned for 2020.
NASA Space Place video playlist -- videos on a wide variety of topics specifically for younger viewers.
Astronomy and Planetary Exploration
Eclipse 2017: Through the Eyes of NASA -- During the eclipse, 14 states across the U.S. were in the path of totality and experienced more than two minutes of darkness in the middle of the day – with a partial eclipse viewable all across North America
The Inner Solar System -- Why does space matter? Why is exploring the inner solar system so crucial? Where will humans and robots venture to next? This six-part video lecture series, filmed July 14, 2010 discusses NASA's past, present and future of discovery on our nearest neighbors in the solar system.
How Big is Space? --  How far are exoplanets -- planets around other stars -- from Earth? How big is our galaxy and what does a light-year, the distance light travels in one year, or about 5.8 trillion miles, look like anyway?
Lunar Reconnaissance Orbiter Gallery -- Video and visualizations from NASA's spacecraft compiling a lunar atlas.
Make Sunspot Cookies -- Real sunspots -- cooler areas of the Sun that appear as dark spots on its surface -- aren’t made of chocolate, but on these sunspot cookies they are. And they're delicious.
Mars Missions and Science Gallery -- Video and visualizations from NASA's missions to Mars.
OSIRIS-Rex -- Video and visualizations from NASA's mission to the asteroid Bennu.
The Search for Alien Earths -- How an instrument called a coronagraph helps astronomers study faint planets around other stars.
The Solar System and Beyond (Kids' Edition) -- a playlist of 32 videos for young viewers talking about the science of our solar system and how NASA explores it.
Earth and Solar Science
Cloud in a Bottle -- By experimenting with temperature and pressure, you can make your own cloud appear in a bottle.
Do You Know Clouds Have Names -- Clouds get their names from their shape, how high they are in the sky, and if they produce precipitation.
Indoor Landslide (in a Milk Carton) -- Learn about landslides and how to build a landslide simulation in a milk carton.
NASA's Earth Minute -- NASA has studied Earth more than any other planet. It's one of our most important missions and our unique capabilities in space give us a global view of our changing planet. (Includes some videos with Spanish subtitles).
NASA Explorers, Season 1: The Cryosphere -- join NASA scientists on their journey to the frozen ends of the Earth as they study our planet's icy regions from satellites, planes and boots on the ground.
NASA Explorers, Season 3: Fires --This fire season has been extreme, with large fires burning from the tropical rainforest to north of the Arctic circle. See NASA explorers investigate the fires as they burn and track their effects down the line.
Snowmelt Science -- When snow melts, it turns into water, some of which people drink. But how much water does snow produce?
Solar Science Playlist -- more than 100 videos showing how NASA and its partners are studying the Sun.
Trees, ICESat-2 and Open Altimetry -- Learn about ICESat-2, a satellite that measurers heights on Earth, including tree heights.
Launching Rockets Through the Leak in Earth's Atmosphere -- NASA scientists are seeking a strange breed of northern lights in the Arctic. When these auroras shine, Earth’s atmosphere leaks into space.
Virtual Expedition: Mapping and Land Cover -- Go on a virtual expedition to learn about how you can explore your world and your land with online tools. 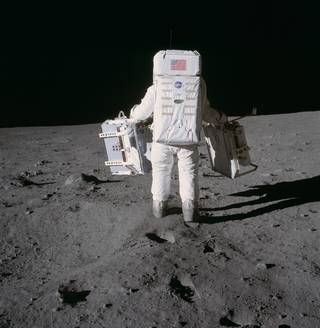 Astronaut Edwin E. Aldrin Jr. moves toward a position to deploy two components of the Early Apollo Scientific Experiments Package (EASEP) on the surface of the Moon during the Apollo 11 extravehicular activity. The Passive Seismic Experiments Package (PSEP) is in his left hand; and in his right hand is the Laser Ranging Retro-Reflector (LR3). Astronaut Neil A. Armstrong, commander, took this photograph with a 70mm lunar surface camera.
Credits: NASA
Historical Apollo Videos
History
Apollo mission videos -- Videos commemorating the 50th anniversary of the crewed Apollo missions.
Marshall Remembers Apollo -- detailed, technical interviews with employees at NASA's Marshall Space Flight Center, where the Saturn rockets that sent astronauts to the Moon were built.
Human Space Flight
Down to Earth -- Astronauts talk about the perspective from space.
NASA Explorers, Season 4: Microgravity -- The International Space Station offers researchers something they can’t get on our home planet: a lab without Earth's gravity. Follow scientists as they launch their research off our planet to see what microgravity may reveal.
Moving Water in Space -- Video from the space station in Ultra High Definition.
Project Apollo Gallery -- Videos and visualizations related to the Apollo moon-landing missions (1967-72) from NASA's Scientific Visualization Studio.
ScienceCast -- Scientific research aboard the International Space Station.
So You Want to Go to Mars? -- Videos about space flight for younger viewers.
Space Station Inflight Events -- Space station crews answer questions from students and the news media.
Space to Ground -- Weekly updates from the space station.
Technology
What is a Cubesat? -- Learn the basics of CubeSats, the small spacecraft that schools, universities and institutions are designing and building to perform missions previously requiring massive, expensive satellites.
How Do Cubesats Get into Orbit? -- CubeSats catch a ride into space on rockets that have extra room for the small spacecraft.
What Does a Cubesat Do? -- CubeSats offer flexibility and opportunity to students, engineers and researchers who want to study weather, evaluate materials and parts or observe deep space.
Publicado por salud equitativa en 6:59