Black Hole Fails to Do Its Job | NASA

Black Hole Fails to Do Its Job | NASA

Black Hole Fails to Do Its Job 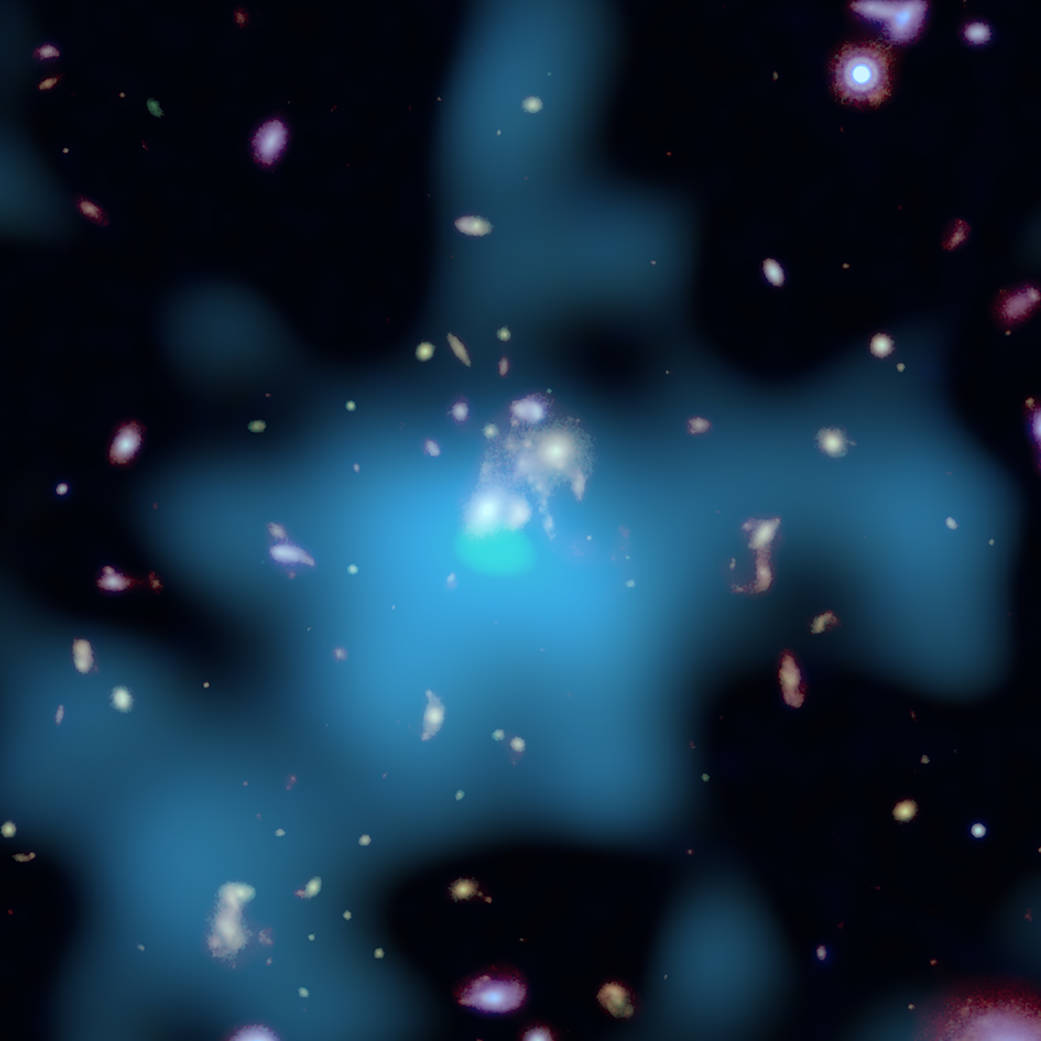 Back to Gallery
Astronomers have discovered what can happen when a giant black hole does not intervene in the life of a galaxy cluster. Using NASA’s Chandra X-ray Observatory and other telescopes they have shown that passive black hole behavior may explain a remarkable torrent of star formation occurring in a distant cluster of galaxies.
Galaxy clusters contain hundreds or thousands of galaxies pervaded by hot, X-ray emitting gas that outweighs the combined mass of all the galaxies. Ejections of material powered by a supermassive black hole in the cluster’s central galaxy usually prevent this hot gas from cooling to form vast numbers of stars. This heating allows supermassive black holes to influence or control the activity and evolution of their host cluster.
But what happens if that black hole stops being active? The galaxy cluster SpARCS104922.6+564032.5 (SpARCS1049 for short) located 9.9 billion light years away from Earth is supplying one answer.
Based on observations from NASA’s Hubble Space Telescope and Spitzer Space Telescope, astronomers had previously discovered stars were forming at an extraordinary rate of about 900 new Suns worth of mass per year in SpARCS1049. This is over 300 times faster than the rate at which our galaxy, the Milky Way, is forming its stars.  (At the rate seen in SpARCS1049, all of the stars in the Milky Way could form in just 100 million years, which is a short period of time compared to our Galaxy’s age of more than ten billion years.)
“It reminds me of the old expression of ‘when the cat’s away, the mice will play,’” said Julie Hlavacek-Larrondo of the University of Montreal in Canada, who led the study. “Here the cat, or black hole, is quiet and the mice, or stars, are very busy.”
This furious star formation is happening about 80,000 light years away from the center of SpARCS1049 in a region outside any of the cluster’s galaxies. Astronomers have been asking: what is causing this prodigious cycle of star birth?
The answer may come from new Chandra data revealing the behavior of the hot gas in SpARCS1049. In most of the cluster, the temperature of the gas is about 65 million degrees. However, at the site of star formation the gas is denser than average and has cooled off to a temperature of only about 10 million degrees. The presence of this cooler gas suggests that other undetected gas reservoirs have cooled to even lower temperatures that enable huge numbers of stars to form.
“Without the black hole actively pumping energy into its surroundings, the gas can cool enough so this impressive rate of star formation can happen,” said co-author Carter Rhea, also of the University of Montreal. “This kind of black hole shut down may be a crucial way for stars to form in the early Universe.”
While there are many examples where energy injected by black holes into their surroundings is responsible for reducing the rate of star formation by factors of tens or thousands or more, these clusters are typically only a few hundred million light years from Earth and are much older than SpARCS1049.
In the case of SpARCS1049, astronomers do not see any signs that a supermassive black hole in the central galaxy is actively pulling in matter. For example, there is no evidence for a jet of material blowing away from the black hole at radio wavelengths, or of an X-ray source from the middle of the galaxy indicating that matter was heated as it fell towards a black hole.
"Many astronomers have thought that without the intervention from a black hole, the formation of stars would run out of control,” said co-author Tracy Webb of McGill, who first discovered SpARCS1049 in 2015 with NASA’s Spitzer Space Telescope. “Now we have observational proof that this is indeed what takes place.”
Why is the black hole so quiet? The observed difference in position between the densest gas and the central galaxy might be the cause. This would mean that the supermassive black hole in the center of this galaxy is being starved for fuel. The loss of a fuel source for the black hole prevents outbursts and allows the gas to cool without impediment, with the densest gas cooling the fastest. One explanation for this offset is that two smaller galaxy clusters collided at some point in the past to create SpARCS1049, moving the densest gas away from the central galaxy.
A paper describing these results was published in The Astrophysical Journal Letters and is available online. NASA's Marshall Space Flight Center manages the Chandra program. The Smithsonian Astrophysical Observatory's Chandra X-ray Center controls science and flight operations from Cambridge and Burlington, Massachusetts.
Image credit: X-ray: NASA/CXO/Univ. of Montreal/J. Hlavacek-Larrondo et al; Optical: NASA/STScI
Read more from NASA's Chandra X-ray Observatory.
For more Chandra images, multimedia and related materials, visit:
http://www.nasa.gov/chandra
Editor: Lee Mohon
Publicado por salud equitativa en 10:46