NASA’s Sounding Rocket Program is Back on the Range | NASA

NASA’s Sounding Rocket Program is Back on the Range | NASA

Program is Back on the Range

UPDATE Sep. 8, 2020: The DUST-2 mission was successfully launched at 2 p.m. EDT on Sep. 8.  The two-stage Black Brant IX suborbital sounding rocket carried the payload to an apogee of approximately 215 miles before descending by parachute. The payload was recovered and good data was received during the mission.
NASA is preparing for the first launch of a sounding rocket since the coronavirus pandemic began in the United States. The DUST-2 mission, which is short for the Determining Unknown yet Significant Traits-2, will carry a miniature laboratory into space, simulating how tiny grains of space dust – the raw materials of stars, planets and solar systems – form and grow. The launch window opens at the White Sands Missile Range in New Mexico on September 8, 2020.
DUST-2, a collaboration between NASA and the Japan Aerospace Exploration Agency, follows up on the DUST mission launched in October 2019. Like its predecessor, DUST-2 will fly on a sounding rocket, a suborbital rocket that makes a brief trip into space before falling back to Earth. Sounding rockets provide cost-effective access to space and remain one of the most efficient ways to achieve near-zero gravity, a critical requirement for the mission.
DUST-2’s goal is to study how individual atoms, shed by dying stars and supernovae, stick together. When they do, they form dust grains – some of the basic building blocks of our universe.
“What we're trying to do is duplicate what happens in at least two astrophysical environments,” said principal investigator Joe Nuth, a planetary scientist at NASA’s Goddard Space Flight Center in Greenbelt, Maryland. “One is when [dust] grains form when stars die, as they blow off their outer atmospheres. The other is during the formation of solar systems, where you're actually forming planets from the vaporized dust of star-forming clouds.”

An artist's concept of a protoplanetry disk surrounding a forming star that is ejecting jets of material (yellow beams). Such disks contain countless tiny dust grains, many of which become incorporated into asteroids, comets, and planets.
Credits: NASA's Goddard Space Flight Center
Both environments involve atoms colliding, sticking together, and forming dust grains. But exactly how dust grains form and grow depends on many different factors. Nuth and his collaborator, Yuki Kimura of Hokkaido University in Japan, designed DUST-2 to study which factors are most important. 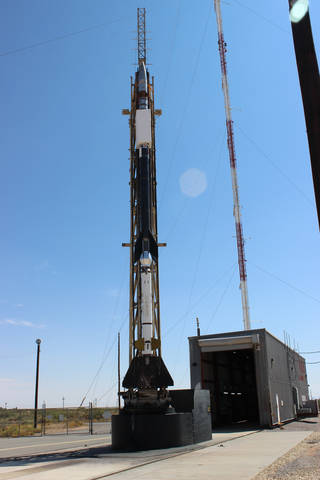 The DUST-2 sounding rocket on the launch rail at White Sands Missile Range.
Credits: NASA/NSROC/Ted Gacek
The refrigerator-sized mini-laboratory will launch aboard a Black Brant IX sounding rocket, reaching an altitude of about 210 miles high before beginning to fall back down to Earth. A lot happens in the next six and a half minutes. Thirty seconds into freefall, the first of its six experiments – all slight modifications of one another – kicks on. Inside a sealed chamber, a tiny filament begins to heat up. The thin coating of iron, silicon, magnesium and other particles sprayed onto the filament diffuse into the surrounding chamber. Some of these atoms will collide and stick – the beginnings of a dust grain – while others ricochet away. Each minute, another chamber turns on until the payload parachutes back to Earth for recovery.
Back in the lab, Nuth, Kimura and their teams will study the grains that formed in each of the six chambers. Hotter particles collide more often, so they will measure how grains formed differently farther or closer to the hot filament. Some elements may block one another from growing dust grains, so they will study which elements ended up in each grain. They’ll also explore a surprise finding from the DUST-1 mission: In that experiment, dust grains that formed in argon gas with a small fraction (5%) of oxygen tended to smush together more than those formed in pure argon, a non-reactive noble gas.
“Without the oxygen, the atoms were like little billiard balls that touched and stuck,” said Nuth. “But with oxygen, when the billiard balls touched, they partially merged together. That was something we didn't suspect.”
Their hunch is that oxygen lowered the melting point of the dust grain, so that incoming particles mashed into partly molten material. To test this idea, DUST-2 removed all oxygen and replaced it with a small quantity (about 5%) of hydrogen.
“If that’s the case, we should get none of that merging with hydrogen,” Nuth said. “So we’ll see if it pans out.”
The experiment also includes a new carbon fiber heating filament for more precise control of the temperature. But the biggest difference between DUST-1 and DUST-2 is in mission operations – it’s the first sounding rocket to launch during the COVID-19 pandemic. The team has implemented many new processes in the background to ensure the launch can happen while protecting the health of the workforce.
“As we carefully evaluated each task, we developed new ways to accomplish some of our hands-on work to minimize the risk of exposure,” said John Hickman, deputy program manager for NASA’s Sounding Rockets Program. 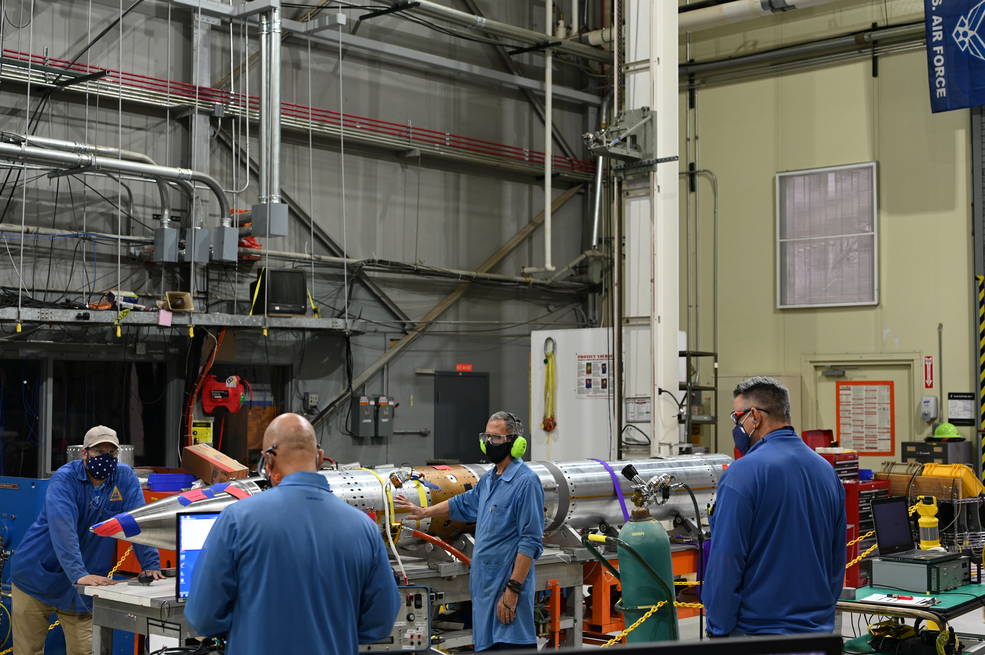