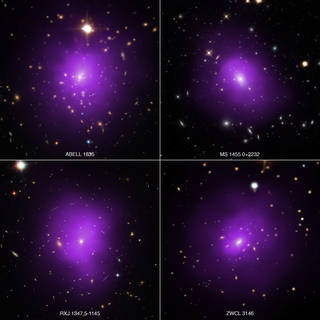 These four galaxy clusters were part of a large survey of over 300 clusters used to investigate dark energy, the mysterious energy that is currently driving the accelerating expansion of the Universe. In these composite images, X-rays from NASA’s Chandra X-ray Observatory (purple) have been combined with optical light from the Hubble Space Telescope and Sloan Digital Sky Survey (red, green, and blue).
Credits: X-ray: NASA/CXC/Univ. of Alabama/A. Morandi et al; Optical: SDSS, NASA/STScI
Read full caption
Astronomers have used data from NASA’s Chandra X-ray Observatory, ESA’s Planck and a large list of optical telescopes to develop a powerful new method for investigating dark energy, the mysterious energy that is currently driving the accelerating expansion of the universe.
The technique takes advantage of the observation that the outer reaches of galaxy clusters, the largest structures in the universe held together by gravity, show similarity in their X-ray emission profiles and sizes. More massive clusters are simply scaled up versions of less massive ones.
“In this sense, galaxy clusters are like Russian dolls, with smaller ones having a similar shape to the larger ones,” said Andrea Morandi of the University of Alabama at Huntsville, who led the study. “Knowing this lets us compare them and accurately determine their distances across billions of light years.”
By using these galaxy clusters as distance markers, astronomers can measure how quickly the Universe was expanding at different times since the Big Bang. According to Einstein’s theory of general relativity, the rate of expansion is determined by the properties of dark energy plus the amount of matter in the Universe, where the latter is mostly made up of unseen material called dark matter.
If the assumed cosmological parameters (e.g., the properties of dark energy or dark matter) are incorrect, then distant clusters will not appear to be similar, that is their sizes will be larger or smaller than expected. The cosmological parameters are then adjusted so that all of the different clusters, with different masses and different distances, appear to be similar. The process is akin to determining the unknown weight of an object by adding or subtracting known weights to a balance scale until the two sides balance.
These latest results confirm earlier studies that the properties of dark energy have not changed over billions of years. They also support the idea that dark energy is best explained by the “cosmological constant,” which Einstein first proposed and is equivalent to the energy of empty space.
“Although we’ve looked hard at other explanations,” said co-author Ming Sun, also of the University of Alabama at Huntsville, “it still appears that dark energy behaves just like Einstein's cosmological constant.”
The researchers studied 320 galaxy clusters with distances from Earth that ranged from about 760 million light years to about 8.7 billion light years. This spans the era where dark energy caused the once-decelerating universe to accelerate, a discovery that shocked many astronomers when it was made almost two decades ago.
To determine more precise results than with the Chandra X-ray data alone, the researchers combined this data with information on the expansion rate of the universe from optical observations of supernovas, and work from Planck on the cosmic microwave background, the leftover radiation from the Big Bang.
“The nature of dark energy is one of the biggest mysteries in physics, so it’s crucial to invent new tools for studying its properties, since different methods can have very different assumptions, strengths and weaknesses,” said Morandi. “We think this new technique has the ability to provide a big leap forward in our understanding of dark energy.”
A paper describing these results appeared in the April 11th, 2016 issue of the Monthly Notices of the Royal Astronomical Society journal and is available online. NASA's Marshall Space Flight Center in Huntsville, Alabama, manages the Chandra program for NASA's Science Mission Directorate in Washington. The Smithsonian Astrophysical Observatory in Cambridge, Massachusetts, controls Chandra's science and flight operations.
Read More from NASA's Chandra X-ray Observatory.
For more Chandra images, multimedia and related materials, visit:
http://www.nasa.gov/chandra
Molly PorterMarshall Space Flight Center, Huntsville, Ala.256-544-0034molly.a.porter@nasa.gov
Megan WatzkeChandra X-ray Center, Cambridge, Mass.617-496-7998mwatzke@cfa.harvard.edu
Editor: Lee Mohon
Publicado por salud equitativa en 6:41