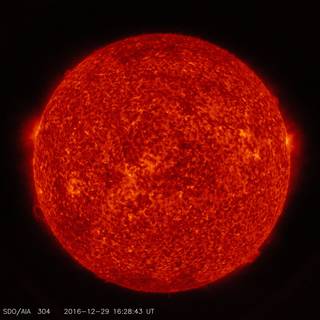 Images from NASA's Solar Dynamics Observatory — such as this one showing the sun as it appears in wavelengths of extreme ultraviolet light — have a time stamp showing Universal Time on it. To maintain accuracy, SDO will join official clocks around the world in adding a leap second on Dec. 31, 2016.
Credits: NASA/SDO
On Dec. 31, 2016, official clocks around the world will add a leap second just before midnight Coordinated Universal Time — which corresponds to 6:59:59 p.m. EST. NASA missions will also have to make the switch, including the Solar Dynamics Observatory, or SDO, which watches the sun 24/7.
Clocks do this to keep in sync with Earth's rotation, which gradually slows down over time. When the dinosaurs roamed Earth, for example, our globe took only 23 hours to make a complete rotation. In space, millisecond accuracy is crucial to understanding how satellites orbit.
"SDO moves about 1.9 miles every second," said Dean Pesnell, the project scientist for SDO at NASA's Goddard Space Flight Center in Greenbelt, Maryland. "So does every other object in orbit near SDO. We all have to use the same time to make sure our collision avoidance programs are accurate. So we all add a leap second to the end of 2016, delaying 2017 by one second."
The leap second is also key to making sure that SDO is in sync with the Coordinated Universal Time, or UTC, used to label each of its images. SDO has a clock that counts the number of seconds since the beginning of the mission. To convert that count to UTC requires knowing just how many leap seconds have been added to Earth-bound clocks since the mission started. When the spacecraft wants to provide a time in UTC, it calls a software module that takes into consideration both the mission's second count and the number of leap seconds — and then returns a time in UTC.