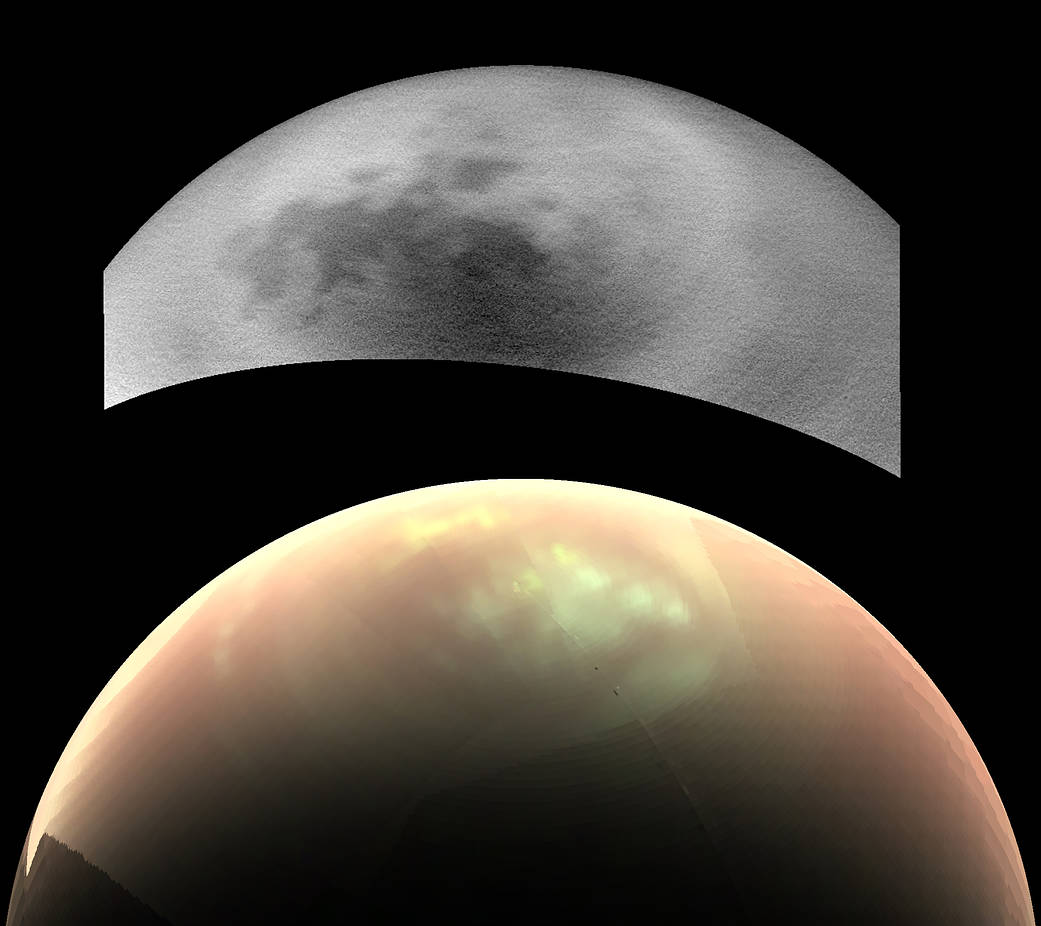 This comparison of two views from NASA's Cassini spacecraft, taken fairly close together in time, illustrates a peculiar mystery:  Why would clouds on Saturn's moon Titan be visible in some images, but not in others?
In the top view, a near-infrared image from Cassini's imaging cameras, the skies above Saturn's moon Titan look relatively cloud free. But in the bottom view, at longer infrared wavelengths, Cassini sees a large field of bright clouds. Even though these views were taken at different wavelengths, researchers would expect at least a hint of the clouds to show up in the upper image. Thus they have been trying to understand what's behind the difference.
As northern summer approaches on Titan, atmospheric models have predicted that clouds will become more common at high northern latitudes, similar to what was observed at high southern latitudes during Titan's late southern summer in 2004. Cassini's Imaging Science Subsystem (ISS) and Visual and Infrared Mapping Spectrometer (VIMS) teams have been observing Titan to document changes in weather patterns as the seasons change, and there is particular interest in following the onset of clouds in the north polar region where Titan's lakes and seas are concentrated.
Cassini's "T120" and "T121" flybys of Titan, on June 7 and July 25, 2016, respectively, provided views of high northern latitudes over extended time periods -- more than 24 hours during both flybys. Intriguingly, the ISS and VIMS observations appear strikingly different from each other. In the ISS observations (monochrome image at top), surface features are easily identifiable and only a few small, isolated clouds were detected. In contrast, the VIMS observations (color image at bottom) suggest widespread cloud cover during both flybys. The observations were made over the same time period, so differences in illumination geometry or changes in the clouds themselves are unlikely to be the cause for the apparent discrepancy: VIMS shows persistent atmospheric features over the entire observation period and ISS consistently detects surface features with just a few localized clouds.
The answer to what could be causing the discrepancy appears to lie with Titan's hazy atmosphere, which is much easier to see through at the longer infrared wavelengths that VIMS is sensitive to (up to 5 microns) than at the shorter, near-infrared wavelength used by ISS to image Titan's surface and lower atmosphere (0.94 microns). High, thin cirrus clouds that are optically thicker than the atmospheric haze at longer wavelengths, but optically thinner than the haze at the shorter wavelength of the ISS observations, could be detected by VIMS and simultaneously lost in the haze to ISS -- similar to trying to see a thin cloud layer on a hazy day on Earth. This phenomenon has not been seen again since July 2016, but Cassini has several more opportunities to observe Titan over the last months of the mission in 2017, and scientists will be watching to see if and how the weather changes.
These two images were taken as part of the T120 flyby on June 7 (VIMS) and 8 (ISS), 2016. The distance to Titan was about 28,000 miles (45,000 kilometers) for the VIMS image and about 398,000 miles (640,000 kilometers) for the ISS image. The VIMS image has been processed to enhance the visibility of the clouds; in this false-color view, clouds appear nearly white, atmospheric haze is pink, and surface areas would appear green.
The Cassini mission is a cooperative project of NASA, ESA (the European Space Agency) and the Italian Space Agency. The Jet Propulsion Laboratory, a division of Caltech in Pasadena, California, manages the mission for NASA's Science Mission Directorate, Washington. The Cassini orbiter and its two onboard cameras were designed, developed and assembled at JPL. The imaging operations center is based at the Space Science Institute in Boulder, Colorado. The visual and infrared mapping spectrometer team is based at the University of Arizona.
Image credit: NASA/JPL-Caltech/SSI/Univ. Arizona/Univ. Idaho
Editor: Tony Greicius
Publicado por salud equitativa en 6:56