For the supermassive black hole at the center of our Milky Way galaxy, it's been a long time between dinners. NASA's Hubble Space Telescope has found that the black hole ate its last big meal about 6 million years ago, when it consumed a large clump of infalling gas. After the meal, the engorged black hole burped out a colossal bubble of gas weighing the equivalent of millions of suns, which now billows above and below our galaxy's center.
The immense structures, dubbed the Fermi Bubbles, were first discovered in 2010 by NASA's Fermi Gamma-ray Space Telescope. But recent Hubble observations of the northern bubble have helped astronomers determine a more accurate age for the bubbles and how they came to be. 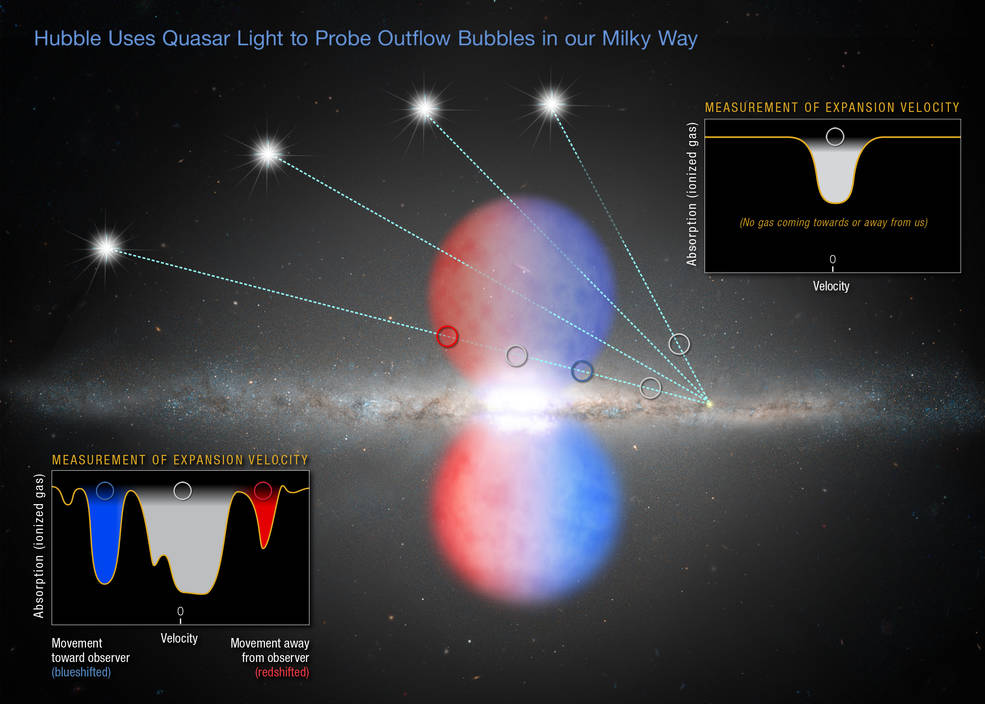 The light of several distant quasars pierces the northern half of the Fermi Bubbles - an outflow of gas expelled by our Milky Way galaxy's hefty black hole. Bottom left: the measurement of gas moving toward and away from Earth, indicating the material is traveling at a high velocity. Hubble also observed light from quasars that passed outside the northern bubble. Upper right: the gas in one such quasar's light path is not moving toward or away from Earth. This gas is in the disk of the Milky Way and does not share the same characteristics as the material probed inside the bubble.
Credits: NASA, ESA, and Z. Levy (STScI)
"For the first time, we have traced the motion of cool gas throughout one of the bubbles, which allowed us to map the velocity of the gas and calculate when the bubbles formed," said lead researcher Rongmon Bordoloi of the Massachusetts Institute of Technology in Cambridge. "What we find is that a very strong, energetic event happened 6 million to 9 million years ago. It may have been a cloud of gas flowing into the black hole, which fired off jets of matter, forming the twin lobes of hot gas seen in X-ray and gamma-ray observations. Ever since then, the black hole has just been eating snacks." 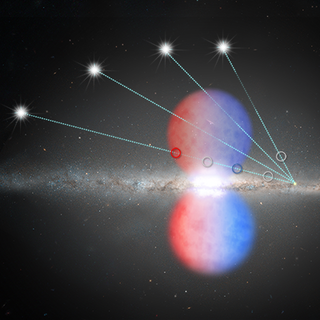 Several distant quasars can be seen through the northern half of the Fermi Bubbles, an outflow of gas expelled by our Milky Way galaxy's hefty black hole. The Hubble Space Telescope probed the quasars' light for information on the speed of the gas and whether the gas is moving toward or away from Earth. Based on the material's speed, the research team estimated that the bubbles formed from an energetic event between 6 million and 9 million years ago.
Credits: NASA, ESA, and Z. Levy (STScI)
The new study is a follow-on to previous Hubble observations that placed the age of the bubbles at 2 million years old.
A black hole is a dense, compact region of space with a gravitational field so intense that neither matter nor light can escape. The supermassive black hole at the center of our galaxy has compressed the mass of 4.5 million sun-like stars into a very small region of space.
Material that gets too close to a black hole is caught in its powerful gravity and swirls around the compact powerhouse until it eventually falls in. Some of the matter, however, gets so hot it escapes along the black hole's spin axis, creating an outflow that extends far above and below the plane of a galaxy.
The team's conclusions are based on observations by Hubble's Cosmic Origins Spectrograph (COS), which analyzed ultraviolet light from 47 distant quasars. Quasars are bright cores of distant active galaxies.
Imprinted on the quasars' light as it passes through the Milky Way bubble is information about the speed, composition, and temperature of the gas inside the expanding bubble.
The COS observations measured the temperature of the gas in the bubble at approximately 17,700 degrees Fahrenheit. Even at those sizzling temperatures, this gas is much cooler than most of the super-hot gas in the outflow, which is 18 million degrees Fahrenheit, seen in gamma rays. The cooler gas seen by COS could be interstellar gas from our galaxy's disk that is being swept up and entrained into the super-hot outflow. COS also identified silicon and carbon as two of the elements being swept up in the gaseous cloud. These common elements are found in most galaxies and represent the fossil remnants of stellar evolution.
The cool gas is racing through the bubble at 2 million miles per hour. By mapping the motion of the gas throughout the structure, the astronomers estimated that the minimum mass of the entrained cool gas in both bubbles is equivalent to 2 million suns. The edge of the northern bubble extends 23,000 light-years above the galaxy.
"We have traced the outflows of other galaxies, but we have never been able to actually map the motion of the gas," Bordoloi said. "The only reason we could do it here is because we are inside the Milky Way. This vantage point gives us a front-row seat to map out the kinematic structure of the Milky Way outflow."
The new COS observations build and expand on the findings of a 2015 Hubble study by the same team, in which astronomers analyzed the light from one quasar that pierced the base of the bubble.
"The Hubble data open a whole new window on the Fermi Bubbles," said study co-author Andrew Fox of the Space Telescope Science Institute in Baltimore, Maryland. "Before, we knew how big they were and how much radiation they emitted; now we know how fast they are moving and which chemical elements they contain. That's an important step forward."
The Hubble study also provides an independent verification of the bubbles and their origin, as detected by X-ray and gamma-ray observations.
"This observation would be almost impossible to do from the ground because you need ultraviolet spectroscopy to detect the fingerprints of these elements, which can only be done from space," Bordoloi said. "Only with COS do you have the wavelength coverage, the sensitivity, and the spectral resolution coverage to make this observation."
The Hubble results appeared in the January 10, 2017, edition of The Astrophysical Journal.
The Hubble Space Telescope is a project of international cooperation between NASA and the European Space Agency. NASA's Goddard Space Flight Center in Greenbelt, Maryland, manages the telescope. The Space Telescope Science Institute (STScI) in Baltimore, Maryland, conducts Hubble science operations. STScI is operated for NASA by the Association of Universities for Research in Astronomy in Washington, D.C.
For the related feature, Hubble Discovers Milky Way Core Drives Wind at 2 Million Miles per hour:https://www.nasa.gov/content/goddard/hubble-discovers-that-milky-way-core-drives-wind-at-2-million-miles-per-hour
For images and more information about the Fermi Bubbles and Hubble, visit:http://www.nasa.gov/hubblehttp://hubblesite.org/news_release/news/2017-10
Felicia ChouNASA Headquarters, Washington, D.C.felicia.chou@nasa.gov202-358-0257
Donna Weaver / Ray VillardSpace Telescope Science Institute, Baltimore, Maryland410-338-4493 / 410-338-4514dweaver@stsci.edu / villard@stsci.edu
Rongmon BordoloiMassachusetts Institute of Technology, Cambridge, Massachusetts617-252-1736bordoloi@mit.edu
Editor: Karl Hille
Publicado por salud equitativa en 11:00