SMILE | The Splitting of the Dunes | NASA

The Splitting of the Dunes | NASA

The Splitting of the Dunes 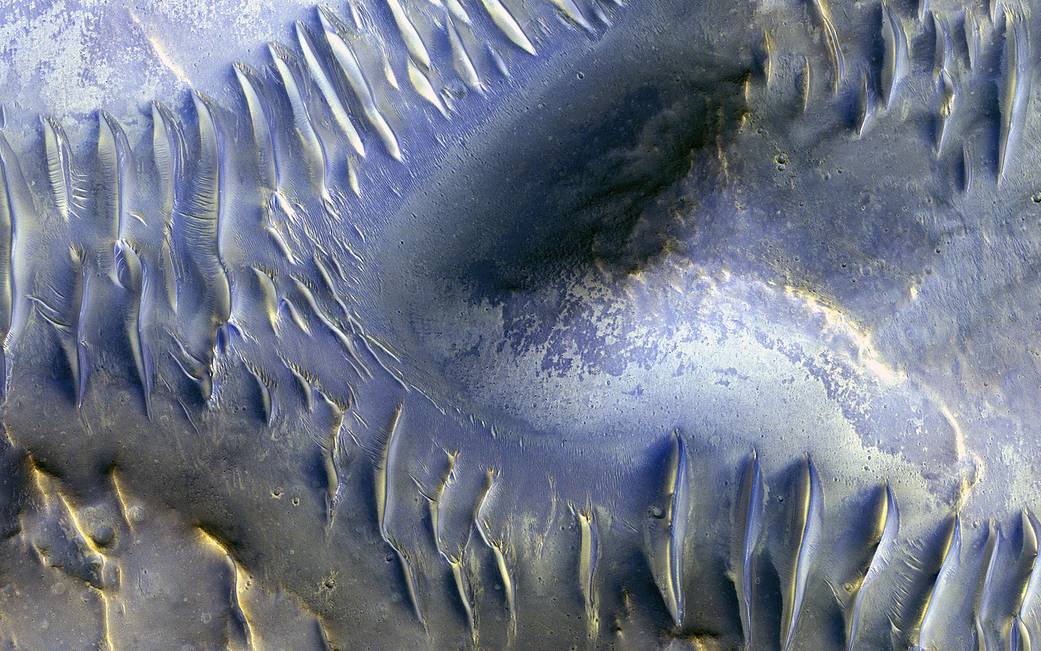 The mound in the center of this Mars Reconnaissance Orbiter (MRO) image appears to have blocked the path of the dunes as they marched south (north is to the left in this image) across the scene. Many of these transverse dunes have slipfaces that face south, although in some cases, it's hard to tell for certain. Smaller dunes run perpendicular to some of the larger-scale dunes, probably indicating a shift in wind directions in this area.
Although it might be hard to tell, this group of dunes is very near the central pit of a 35-kilometer-wide impact crater. Data from other instruments indicate the presence of clay-like materials in the rock exposed in the central pit.
This image was acquired by the High Resolution Imaging Science Experiment (HiRISE) instrument aboard MRO on April 27, 2009, at 15:16 local Mars time. It is a stereo pair with image ESP_013319_1685.
The map is projected here at a scale of 50 centimeters (9.8 inches) per pixel. [The original image scale is 52 centimeters (20.5 inches) per pixel (with 2 x 2 binning); objects on the order of 156 centimeters (61.4 inches) across are resolved.] North is up.
The University of Arizona, Tucson, operates HiRISE, which was built by Ball Aerospace & Technologies Corp., Boulder, Colo. NASA's Jet Propulsion Laboratory, a division of Caltech in Pasadena, California, manages the Mars Reconnaissance Orbiter Project for NASA's Science Mission Directorate, Washington.
Additional image products: HiRISE
Image Credit: NASA/JPL/University of ArizonaCaption: Nicole Baugh
Editor: Martin Perez
Publicado por salud equitativa en 11:32