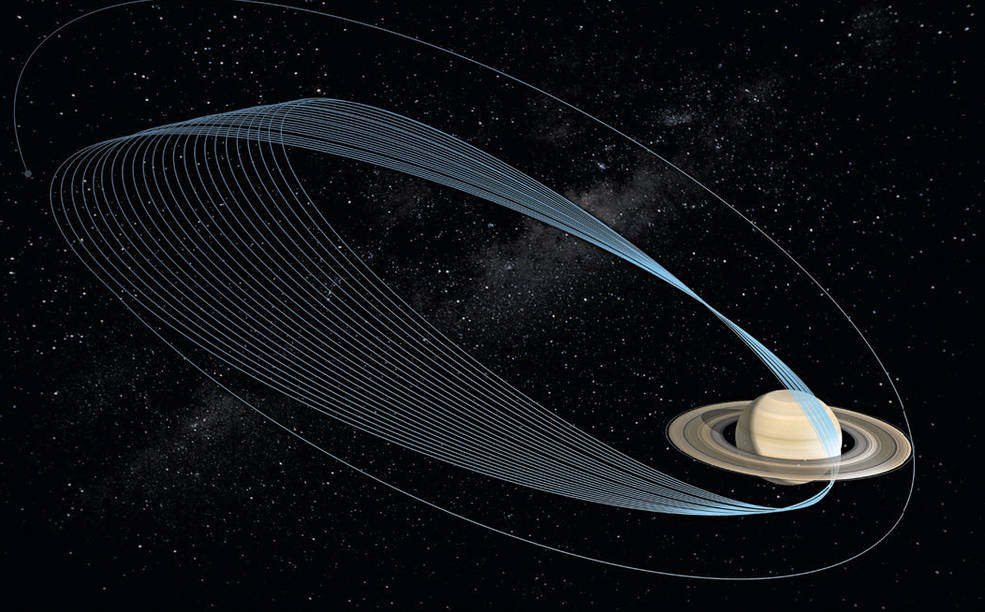 NASA's Cassini spacecraft will make 22 orbits of Saturn during its Grand Finale, exploring a totally new region between the planet and its rings.
Credits: NASA/JPL-Caltech
NASA will hold a news conference at 3 p.m. EDT Tuesday, April 4, at the agency’s Jet Propulsion Laboratory (JPL) in Pasadena, California, to preview the beginning of Cassini's final mission segment, known as the Grand Finale, which begins in late April. The briefing will air live on NASA Television and the agency’s website.
Cassini has been orbiting Saturn since June 2004, studying the planet, its rings and its moons. A final close flyby of Saturn's moon Titan on April 22 will reshape the Cassini spacecraft's orbit so that it begins its final series of 22 weekly dives through the unexplored gap between the planet and its rings. The first of these dives is planned for April 26. Following these closer-than-ever encounters with the giant planet, Cassini will make a mission-ending plunge into Saturn's upper atmosphere on Sept. 15.
The panelists for the briefing are:
Media who would like to attend the event at JPL must arrange access in advance by contacting Gina Fontes in the JPL Media Relations Office at 818-354-9380 or georgina.d.fontes@jpl.nasa.gov. Media who arrange access must bring to the event valid media credentials, and for non-U.S. citizens, valid passports.
To participate by phone, media must email their name and affiliation to georgina.d.fontes@jpl.nasa.gov by 8 a.m. April 4.
Media and the public also may ask questions during the briefing on Twitter using the hashtag #askNASA.
Supporting graphics, video and background information about Cassini's Grand Finale will be posted before the briefing at:
http://saturn.jpl.nasa.gov/grandfinale
The Cassini mission is a cooperative project of NASA, ESA (European Space Agency) and the Italian Space Agency. JPL, a division of Caltech in Pasadena, California, manages the mission for NASA's Science Mission Directorate in Washington. JPL designed, developed and assembled the Cassini orbiter.
For more information about Cassini, go to:
http://www.nasa.gov/cassini
and
http://saturn.jpl.nasa.gov
-end-
Dwayne Brown / Laurie Cantillo
Headquarters, Washington
202-358-1726 / 202-358-1077
dwayne.c.brown@nasa.gov / laura.l.cantillo@nasa.gov
Preston Dyches
Jet Propulsion Laboratory, Pasadena, Calif.
818-394-7013
preston.dyches@jpl.nasa.gov
Editor: Karen Northon
Publicado por salud equitativa en 11:31