Slavery is Not a Thing of the Past, It Still Exists Today Affecting Millions | Inter Press Service

Slavery is Not a Thing of the Past, It Still Exists Today Affecting Millions | Inter Press Service

Slavery is Not a Thing of the Past, It Still Exists Today Affecting Millions

Print | Send by email
This is part of a series of features from across the globe on human trafficking. IPS coverage is supported by the Riana Group. 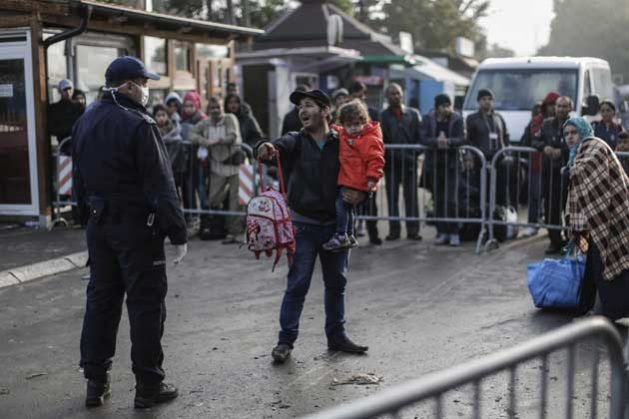 Hassan Hussein, a refugee from Syria, pleads with police to allow his family into a registration centre for migrants and refugees in Preševo, southern Serbia. Credit: Sam Tarling/Oxfam
WASHINGTON, Feb 28 2019 (IPS) - While natural hazards like hurricanes, exacerbated by climate change, are causing people to migrate, it’s conflict, violence and persecution that have forced more than 68.5 million people from their homes today, exposing them to higher risks and increased vulnerability, especially women and children.
Vulnerable people on the move face massive risks and uncertainty to find safety and opportunity for themselves and their families. Unfortunately, in many cases they are taken advantage of and their rights ignored, forced to work in terrible conditions for little, or in some cases, no money.
Elsewhere, 120,000 people crossed the Central Mediterranean in 2017 – the migrant route with most deaths recorded in the world, and nearly 2,900 migrants recorded killed or missing on that route in the same year.
Most of them traveled on smugglers’ boats departing from Libya, Tunisia or Egypt, risking their lives in search of safety and opportunity in Italy and beyond.
The reality of the harrowing journey in search of safety in Europe came into sharp focus when three-year-old Alan Kurdi’s [initially reported as Aylan Kurdi] image made headlines when he drowned in the Mediterranean after fleeing Syria with his family.
Recently, a little refugee boy from Mali also drowned in the Mediterranean. In preparation for the ill-fated trip, he had stitched a school report to his clothes to show European authorities what a good student he was.

In the Northern Triangle of Guatemala, Honduras and El Salvador, thousands of Central Americans are arriving at the U.S.-Mexican border, fleeing domestic and gang violence, state corruption and impunity, climate induced droughts, and economic hardship in their home countries.
We see women bearing the brunt of violence and poverty with high levels of sexual and gender-based violence, and alarming levels of femicide. It is not uncommon for a girl and her family to be targeted and even killed by gangs if she refuses to become a gang member’s sex slave.
And once at the border, children have died due to the difficult journey they are taking and as a result of medical care not being available on time.
In the US, there are countless examples of workers being exploited, many of whom are migrants. Oxfam published a report detailing how the poultry industry exploits vulnerable people who have few other options to take on the most dangerous and thankless jobs in the poultry plants.
Because of their precarious situations, most workers are afraid to speak out or do anything that might jeopardize their jobs. Oxfam reported that some workers were forced to wear adult diapers because they did not have adequate bathroom breaks.
As part of Oxfam’s Behind the Barcodes campaign, Oxfam has also worked with laborers in Southeast Asia and elsewhere for more rights and protections. In the seafood industry, workers find themselves in conditions akin to modern slavery.
Female migrant workers especially, who perform jobs like peeling the shrimps for cheap shrimp cocktail you can buy at your grocery store, are often subjected to illegal recruitment and have their travel documents and wages confiscated.
The UN and the international community do acknowledge the plight of modern slavery and the challenges migrant workers face around the world, but more needs to be done.
Unfortunately, instead of helping address and resolve the displacement crisis with thoughtful, humane policies, and a genuine sense of shared responsibility,too many leaders are using scare tactics and depicting migrants and refugees as violent criminals and terrorists, when they are in fact the ones fleeing violence and also have much to offer to their new communities.
These leaders around the globe are doing this with a blatant disregard for international humanitarian law, human rights and global norms that are meant to protect the most vulnerable amongst us.
This was demonstrated in the Trump Administration’s inhumane policies separating children from their families and in trying to deny women who are victims of domestic violence from seeking asylum in the United States.
There has been some progress to help migrants and refugees from the UN. In 2016, President Obama hosted a UN Summit for Refugees and Migrants. The Summit led to countries committing to a $4.5 billion increase in global humanitarian funding. Following the Summit at the UN General Assembly, 193 UN member states agreed to coordinate and cooperate to improve the global response to the migration crisis.
They agreed to do such things as ease pressures on countries that host most refugees, like Bangladesh, Uganda, Ethiopia, Jordan, Lebanon and Turkey. They committed to building refugees’ self-reliance through access to education and livelihoods, expanding access to resettlement and other complementary pathways, and fostering conditions for refugees to voluntarily return home.
They also agreed to start working on a Global Compact for Refugees and a Global Compact for Migration that was recently endorsed at the end of last year.
The compacts include such things as recognition of the need for meaningful participation by refugees and host communities in decision making and commitments to uphold the human rights of all migrants regardless of status.
On the downside, the compacts aren’t binding so there is no way to legally hold endorsers accountable. And, the United States retreated from its leadership role in protecting refugees and withdrew from the Global Compact on Migration.
Overall, the mass migration taking place globally presents opportunities but also huge risks for those who aren’t protected along the way or when they arrive.
Many think of slavery as a thing of the past, but it still exists today, affecting millions around the world, as people make desperate decisions for a better life.
We need more protections and more implementation of the systems we have in place to achieve a more safe and just world for everyone.
—————————————–
The Global Sustainability Network ( GSN ) http://gsngoal8.com/ is pursuing the United Nations Sustainable Development Goal number 8 with a special emphasis on Goal 8.7 which ‘takes immediate and effective measures to eradicate forced labour, end modern slavery and human trafficking and secure the prohibition and elimination of the worst forms of child labour, including recruitment and use of child soldiers, and by 2025 end child labour in all its forms’.

The origins of the GSN come from the endeavours of the Joint Declaration of Religious Leaders signed on 2 December 2014. Religious leaders of various faiths, gathered to work together “to defend the dignity and freedom of the human being against the extreme forms of the globalization of indifference, such us exploitation, forced labour, prostitution, human trafficking” and so forth.