Print | Send by email |En español
This is part of a series of features from across the globe on human trafficking. IPS coverage is supported by the Riana Group. 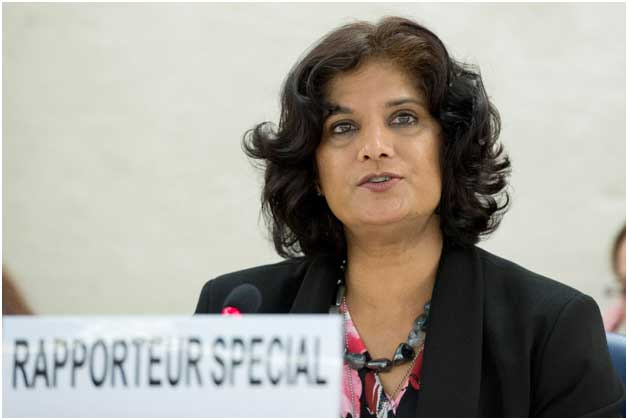 Urmila Bhoola, UN Special Rapporteur on Contemporary Forms of Slavery
UNITED NATIONS, Mar 7 2019 (IPS) - The United Nations, which diligently monitors human rights violations worldwide, believes that centuries-old slavery still exists worldwide.
The UN mandate on “contemporary forms of slavery” includes, but is not limited to, issues such as: traditional slavery, forced labour, debt bondage, serfdom, children working in slavery or slavery-like conditions, domestic servitude, sexual slavery, and servile forms of marriage, according to Urmila Bhoola of South Africa, the UN Special Rapporteur on Contemporary Forms of Slavery.
In an interview with IPS, Bhoola pointed out that slavery was the first human rights issue to arouse wide international concern.
But it still continues today—“and slavery-like practices also remain a grave and persistent problem”.
She said “traditional forms of slavery have been criminalized and abolished in most countries, but contemporary forms of slavery are still prevalent in all regions of the world”.
Still, many UN member states who are suspected of such human rights violations refuse to permit international experts—designated as UN Special Rapporteurs — to either investigate allegations or even formally visit these countries, according to published reports.
Asked about these constraints, Bhoola said she he has so far visited Niger, Belgium, Nigeria, El Salvador, Mauritania, Paraguay and, lastly Italy, in October 2018.
Her mandate includes the implementation of Article 4 of the Universal Declaration of Human Rights (UDHR), which states that ‘No one shall be held in slavery or servitude: slavery and the slave trade shall be prohibited in all their forms”.
She said “country visits’ are only conducted upon invitation from governments”.
“I have issued requests for country-visits to many countries but due to the mandate’s name and focus, member states are often reluctant to invite the mandate on contemporary forms of slavery, to conduct a visit,” said Bhoola, who was appointed Special Rapporteur by the UN Human Rights Council back in May 2014.

The origins of the GSN come from the endeavours of the Joint Declaration of Religious Leaders signed on 2 December 2014. Religious leaders of various faiths, gathered to work together “to defend the dignity and freedom of the human being against the extreme forms of the globalization of indifference, such us exploitation, forced labour, prostitution, human trafficking” and so forth.