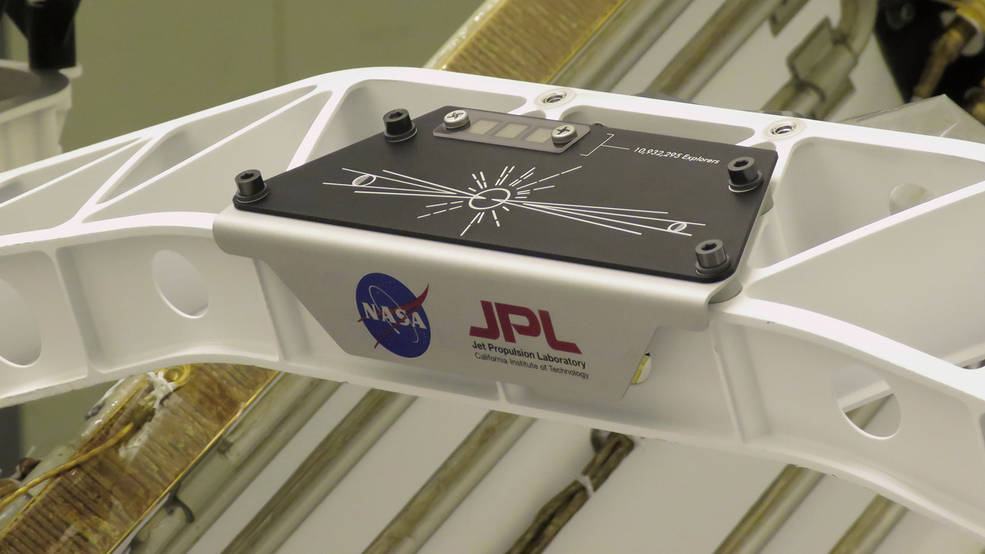 A placard commemorating NASA's "Send Your Name to Mars" campaign was installed on the Perseverance Mars rover on March 16, 2020, at Kennedy Space Center. Three silicon chips (upper left corner) were stenciled with 10,932,295 names and the essays from 155 finalists in NASA's "Name the Rover" contest.
Credits: NASA/JPL-Caltech
Full image and caption
NASA's "Send Your Name to Mars" campaign invited people around the world to submit their names to ride aboard the agency's next rover to the Red Planet. Some 10,932,295 people did just that. The names were stenciled by electron beam onto three fingernail-sized silicon chips, along with the essays of the 155 finalists in NASA's "Name the Rover" contest. The chips were then were attached to an aluminum plate on NASA's Perseverance Mars rover at Kennedy Space Center in Florida on March 16. Scheduled to launch this summer, Perseverance will land at Jezero Crater on Feb. 18, 2021.
The three chips share space on the anodized plate with a laser-etched graphic depicting Earth and Mars joined by the star that gives light to both. While commemorating the rover that connects the two worlds, the simple illustration also pays tribute to the elegant line art of the plaques aboard the Pioneer spacecraft and golden records carried by Voyagers 1 and 2. Affixed to the center of the rover's aft crossbeam, the plate will be visible to cameras on Perseverance's mast.
Currently, the coronavirus has not impacted the Mars Perseverance rover launch schedule. The installation was one of numerous recent activities performed by the Perseverance assembly, test and launch operations team. On March 21, the team began reconfiguring the rover so it can ride atop the Atlas V rocket. Steps included stowing the robotic arm, lowering and locking in place the remote sensing mast and high-gain antenna, and retracting its legs and wheels. 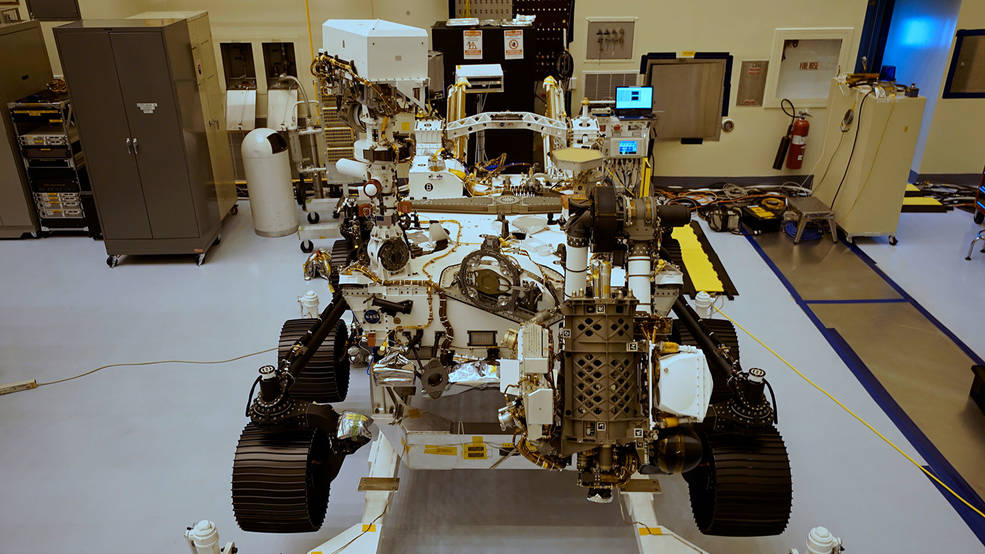 Top center: The plate on the aft crossbeam of NASA's Mars Perseverance rover — seen here on March 16, 2020, at NASA's Kennedy Space Center— carries 10,932,295 names submitted by people during NASA's "Send Your Name to Mars" campaign and essays of the 155 finalists in the "Name the Rover" contest.
Credits: NASA/JPL-Caltech
Full image and caption
The Perseverance rover is a robotic scientist weighing just under 2,300 pounds (1,043 kilograms). It will search for signs of past microbial life, characterize Mars' climate and geology, collect samples for future return to Earth, and help pave the way for human exploration of the Red Planet.
JPL, a division of Caltech in Pasadena, is building and will manage operations of the Mars Perseverance rover for NASA. The agency's Launch Services Program, based at the agency's Kennedy Space Center in Florida, is responsible for launch management. The Mars 2020 project with its Perseverance rover is part of a larger program that includes missions to the Moon as a way to prepare for human exploration of the Red Planet. Charged with returning astronauts to the Moon by 2024, NASA will establish a sustained human presence on and around the Moon by 2028 through NASA's Artemis lunar exploration plans.
For more information about the mission, go to:
https://mars.nasa.gov/mars2020/
For more about NASA's Moon to Mars plans, visit:
https://www.nasa.gov/topics/moon-to-mars
Grey Hautaluoma / Alana JohnsonHeadquarters, Washington202-358-0668 / 202-358-1501grey.hautaluoma-1@nasa.gov / alana.r.johnson@nasa.gov
DC AgleJet Propulsion Laboratory, Pasadena, Calif.818-393-9011david.c.agle@jpl.nasa.gov
2020-057
Editor: Tony Greicius
Publicado por salud equitativa en 8:59