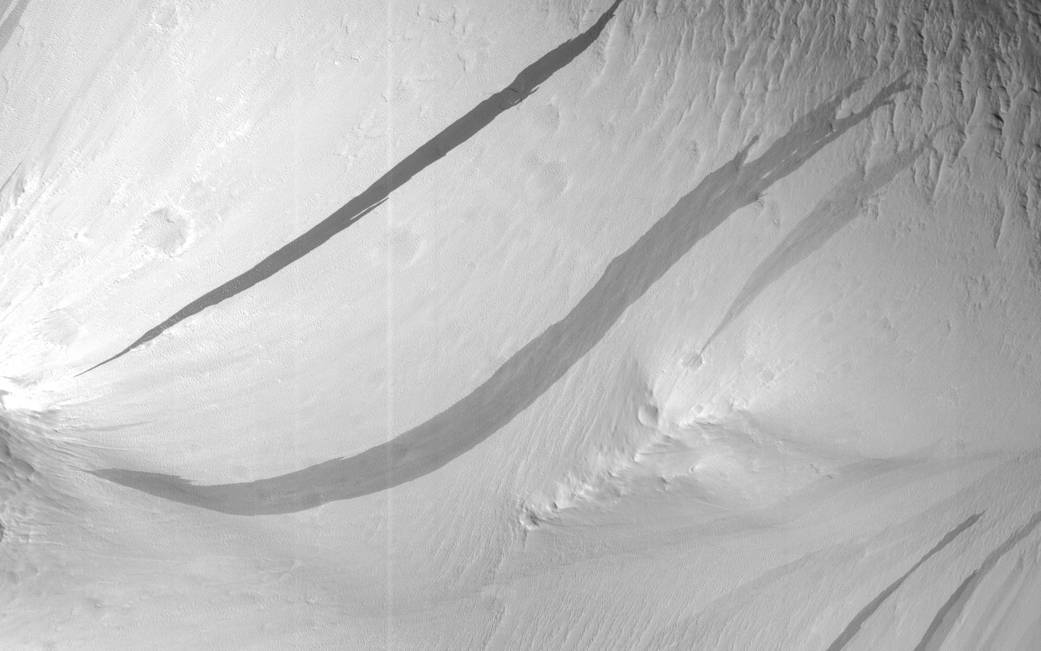 The image shows a region we see many slope streaks, typically dark features on slopes in the equatorial regions on Mars. They may extend for tens of meters in length and gradually fade away with time as new ones form. The most common hypothesis is that they are generated by dust avalanches that regularly occur on steep slopes exposing fresh dark materials from underneath the brighter dust.
There are many types of slope streaks but one of the most recent and significant findings using HiRISE was the discovery of a new type called "recurring slope lineae," or RSL for short. Recent studies suggest that RSL may form through the flow of briny (extremely salty) liquid water that can be stable on the surface of Mars even under current climatic conditions for a limited time in summer when it is relatively warm.
How can we distinguish between conventional slope streaks like the ones we see here and RSL? There are many criteria. For instance, RSL are usually smaller in size than regular slope streaks. However, one of the most important conditions is seasonal behavior, since RSL appear to be active only in summer while regular slope streaks can be active anytime of the year.
This site is monitored regularly by HiRISE scientists because of the high density of slope streaks and their different sizes and orientations. If we look at a time-lapse sequence, we will see that a new slope streak has indeed formed in the period since April 2016 (and we can note how dark it is in comparison to the others indicating its freshness). However, this period corresponds mainly to the autumn season in this part of Mars, whereas we do not see any major changes in the summer season. This suggests that the feature that developed is a regular slope streak just like all the others in the area.
The University of Arizona, Tucson, operates HiRISE, which was built by Ball Aerospace & Technologies Corp., Boulder, Colo. NASA's Jet Propulsion Laboratory, a division of Caltech in Pasadena, California, manages the Mars Reconnaissance Orbiter Project for NASA's Science Mission Directorate, Washington.
Editor: Tony Greicius