Humanity’s great leap into the space between the stars has, in a sense, already begun. NASA's Voyager 1 probe broke through the sun’s magnetic bubble to touch the interstellar wind. Voyager 2 isn’t far behind. New Horizons shot past Pluto on its way to encounters with more distant dwarf worlds, the rubble at the solar system’s edge.
Closer to home, we’re working on techniques to help us cross greater distances. Astronauts feast on romaine lettuce grown aboard the International Space Station, perhaps a preview of future banquets en route to Mars, or to deep space.
For the moment, sending humans to other stars remains firmly in the realm of science fiction—as in the new film, “Passengers,” when hibernating travelers awaken in midflight. But while NASA so far has proposed no new missions beyond our solar system, scientists and engineers are sketching out possible technologies that might one day help to get us there.
NASA’s Journey to Mars, a plan aimed at building on robotic missions to send humans to the red planet, could be helping lay the groundwork.
“Propulsion, power, life support, manufacturing, communication, navigation, robotics: the Journey to Mars is going to force us to make advances in every one of these areas,” said Jeffrey Sheehy, NASA’s Space Technology Missions Directorate chief engineer in Washington, D.C. “Those systems are not going to be advanced enough to do an interstellar mission. But Mars is stepping us that much farther into space. It’s a step along the way to the stars.” 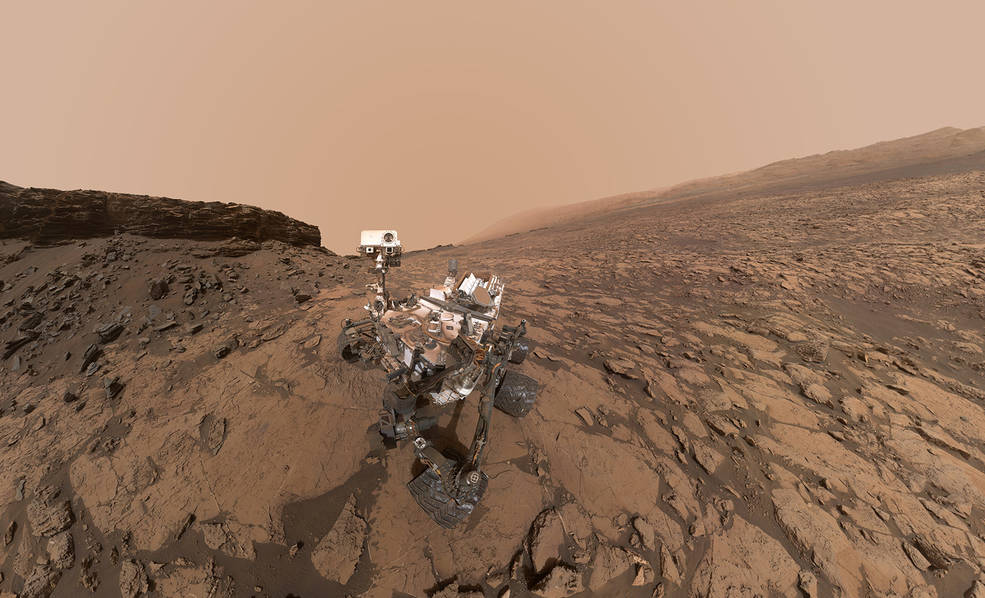 A selfie taken by Curiosity the Mars rover in the Murray Buttes area. NASA’s Journey to Mars, a plan aimed at building on robotic missions to send humans to the red planet, could be helping lay the groundwork.
Credits: NASA/JPL-Caltech/MSSS
Charting the unknown
Hurling ourselves, Passengers-style, just to the nearest star, Proxima Centauri, would require crossing almost inconceivably vast distances. We would need truly exotic technology, such as suspended animation or multi-generational life support. That places in-person visits well out of reach, at least for the near term.
But the possibility of robotic interstellar probes is coming into much sharper focus. Space probe pioneers say the radiation, energy and particle-bathed space between the stars—the so-called interstellar medium—is itself a worthy science destination.
“We need more explorers, more of these local probes into this region, so we can understand better these interface conditions between our sun and the interstellar medium," said Leon Alkalai, an engineering fellow at NASA’s Jet Propulsion Laboratory in Pasadena, California, and co-author of a 2015 report on exploring interstellar space. "Like the ancient mariners, we want to start creating a map.”
Alkalai’s report, “Science and Enabling Technologies for the Exploration of the Interstellar Medium,” maps out the knowns and unknowns of largely uncharted regions, from the dark, distant, dwarf worlds of the Kuiper Belt to the “bow shock”—the turbulent transition thought to separate the sun’s bubble of plasma from the interstellar wind. Drawing on the work of more than 30 specialists during two workshops at the Keck Institute for Space Studies, the report poses pressing questions about the structure, composition and energy flow in this cosmic vastness. And it paints one of the most detailed pictures yet of a possible interstellar probe using present-day technology.

An annotated illustration of the interstellar medium. The solar gravity lens marks the point where a conceptual spacecraft in interstellar space could use our sun as a gigantic lens, allowing zoomed-in close-ups of planets orbiting other stars.
Credits: Charles Carter/Keck Institute for Space Studies
Part of the report focuses on a “Design Reference Mission,” a conceptual starting point that allowed workshop scientists to begin teasing out some of the technical requirements of an interstellar probe. The resulting probe concept was meant to be “daring, challenging, inspirational to the public,” and “a rational first step towards attempting to reach another star,” the report said. It’s the latest in a long line of interstellar probe concepts by NASA scientists stretching back to the 1970s.
In this conceptual scenario, the disk-shaped probe in a bullet-shaped housing is launched as a payload on the Space Launch System, NASA’s next big rocket, in the late 2020s. With gravitational boosts from Earth, Jupiter and the sun itself, it could reach interstellar space in just 10 years. By comparison, it took Voyager 1 36 years to reach the heliopause, or the boundary of interstellar space.
The probe would rely on both rockets and electrical power from next-generation radioisotope thermoelectric generators, enhanced versions of the kind now onboard the Mars Curiosity Rover. Such a probe would carry a variety of sensors and a communications antenna. It could investigate the interstellar medium and its boundary with the solar system, and perhaps even conduct a flyby of a Kuiper Belt object, one of the many unknown space bodies that orbit the sun far beyond Pluto.
Future studies could examine the possibility of electric propulsion for the probe, or solar or electric sails. 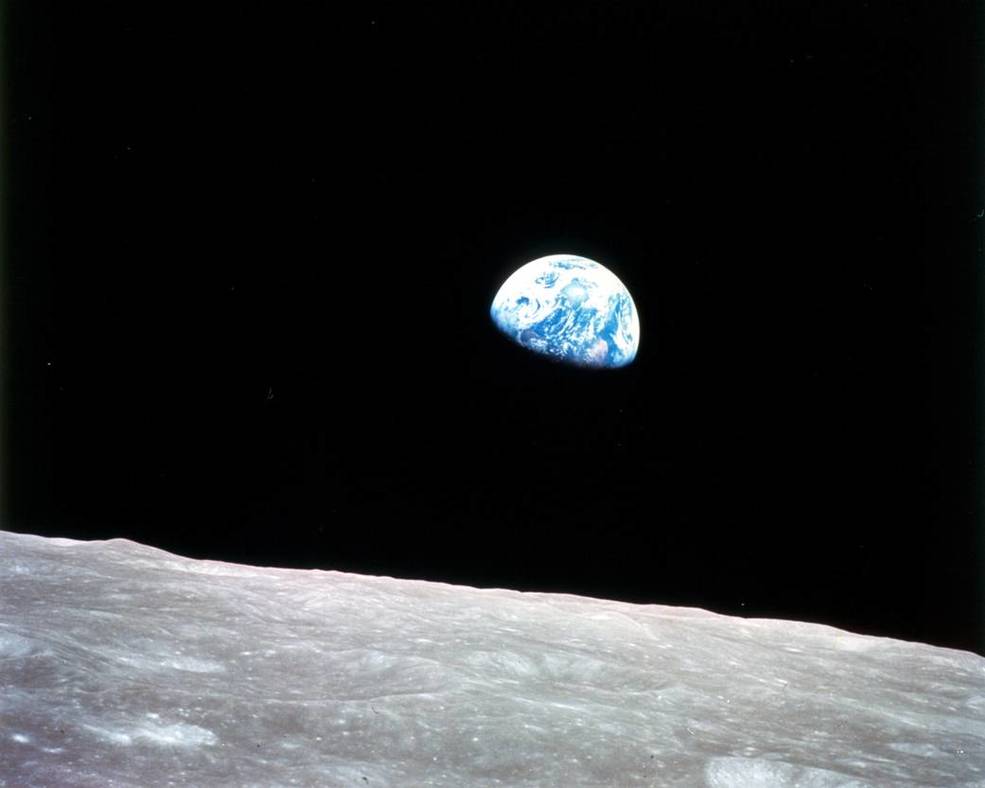 Apollo 8, the first manned mission to the moon, entered lunar orbit on Christmas Eve, Dec. 24, 1968. That evening, the astronauts held a live broadcast from lunar orbit, in which they showed pictures of the Earth and moon as seen from their spacecraft. Possible future techonology like solar gravitational lensing may give us pictures of other worlds detailed enough to reveal continents and oceans, like this photo of Earth.
Credits: NASA
Solar gravity: a window on another world
One of the most extraordinary conceptual spacecraft detailed in the report also would exit the solar system, but only just. And its focus, literally, would be on alien worlds.
This conceptual spacecraft would be parked in near interstellar space to use our sun as a gigantic lens, allowing zoomed-in close-ups of planets orbiting other stars. A space telescope would be lofted to a position far beyond Pluto, some 550 times the distance from Earth to the sun, or farther. It would take advantage of an effect described by Einstein: the power of gravity to bend light rays.
The stream of light from a distant star and its planet would be bent around the edges of the sun, like water flowing around a rock, meeting on the other side at a focal point—where it would be greatly magnified. The telescope would be placed in just the right position to capture these images.
The images would be smeared into a ring around the sun, called an Einstein ring, and the technical challenges would be immense: the distortions would have to be corrected and the fragmentary images reassembled. But if successful, the lens could be powerful enough to reveal surface features of an exoplanet—a planet around another star.
“It would almost be like the Earthrise picture from the moon,” Alkalai said, recalling the iconic image sent back by the Apollo 8 astronauts in 1968. “You would see clouds and continents and oceans, that kind of scale of images. From Earth, every image of an exoplanet is a single pixel, so you’re looking with a straw at the exoplanet. If you want to image continents on an exoplanet, you need something like the solar gravitational lens.”
Once we are ready to take the giant stride to another star, the problem of propulsion takes center stage. Carrying bulky fuel tanks could increase the mass of an interstellar probe beyond the realm of feasibility.
But reaching even one-tenth the speed of light would allow a space probe to arrive at the nearest star in a 50-year time frame, Sheehy said.
“We would never be able to accelerate to that kind of velocity using a chemical reaction,” such as those in present-day rockets, he said.
One answer that might just possibly be within reach, he said, involves “beamed energy.” A powerful laser array, either on Earth’s surface or in orbit, could be used to accelerate space probes equipped with sails to some fraction of the speed of light. NASA’s Innovative Advanced Concepts Program (NIAC) recently chose one such project, led by Philip Lubin at the University of California, Santa Barbara, to receive a second grant for further development.
NIAC also recently provided funding for a conceptual project that might warm the hearts of “Passengers” fans. Called “Advanced Torpor Inducing Transfer Habitats for Human Stasis to Mars,” this research effort by John Bradford of Space Works Inc., in Atlanta, investigates how to place astronauts in a deep sleep state with reduced metabolic rates for trips between Earth and Mars. While it isn’t true suspended animation or intended for interstellar travel, such a project highlights the extreme technical difficulties involved in sending fragile human bodies across the reaches of interstellar space. 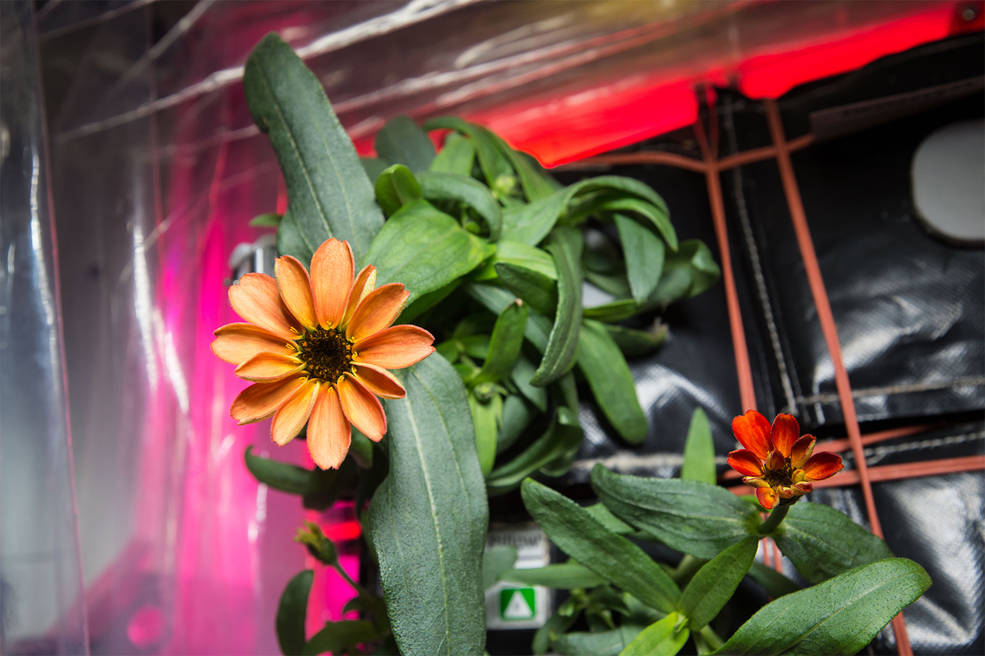 The first blooming zinnia flower in the Veggie plant growth system aboard the International Space Station. Growing food in space is one of the challenges humans will have to face before attempting interstellar travel.
Credits: NASA
Printing a pizza
If our species ever attempts such trips, they could take many decades or even centuries, perhaps requiring some kind of suspension and revival or vessels that can sustain human life for several generations.
“Maybe the people we launch won’t be the people who actually reach Alpha Centauri,” Sheehy said. “It will be their kids. But you’ve got to eat for those 80 years.”
Learning to grow food in space could help, he said, though growing plants from seeds requires “real estate in space. A tomato plant is so big, a head of lettuce is a certain size.”
Another possibility is using 3-D printers that “build 3-D objects up layer by layer. Why couldn’t we build a cell that way? Why couldn’t we build food that way? Could you print a pizza?”
Alkalai also considers human interstellar travel an extremely distant prospect.
“The notion of sending humans to interstellar space is so far out in the sense that people need to have resources on the scale of a planet,” he said. “The only sci-fi story that I like, that might have some scientific basis, is not to build a Star Trek Enterprise but to really hijack an asteroid.
“Imagine a population that would be able to be on a binary asteroid. Then they could use one of them to swing the other one into interstellar space. Then you have resources on the asteroid, a source of iron, carbon, other materials. They could mine that as a source of resources for living, for energy. You would have to imagine something like this designed for many, many generations.”
But the daunting challenges even to sending robotic probes to the stars should be motivating, not discouraging, Sheehy said.
“Anywhere we’ve ever gone as humans, we always learn something, even if it’s just over the next mountain range,” he said. “A lot of times you discover something about yourself on a journey like that. We always find something that surprises us.”
Editor: Tony Greicius