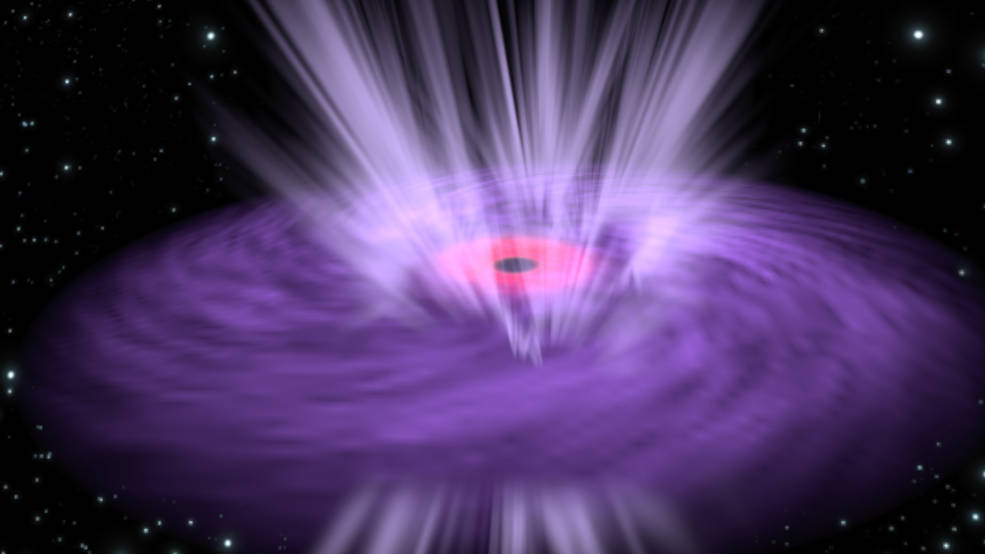 This artist's concept illustrates a supermassive black hole with X-ray emission emanating from its inner region (pink) and ultrafast winds (light purple lines) streaming from the surrounding disk.
Credits: ESA
For the first time, scientists have measured rapidly varying temperatures in hot gas emanating from around a black hole. These ultrafast "winds" are created by disks of matter surrounding black holes.
The winds, according to new measurements of a nearby supermassive black hole obtained with NASA's Nuclear Spectroscopic Telescope Array (NuSTAR) telescope, can heat up and cool down in the span of just a few hours. The black hole is located in the active galaxy IRAS 13224-3809 in the constellation Centaurus. Scientists report these findings, using data from NuSTAR and European Space Agency's XMM-Newton telescope, in the journal Nature.
"We know that supermassive black holes affect the environment of their host galaxies, and powerful winds arising from near the black hole may be one means for them to do so," says NuSTAR Principal Investigator Fiona Harrison, professor at Caltech in Pasadena. "The rapid variability, observed for the first time, is providing clues as to how these winds form and how much energy they may carry out into the galaxy."
Full story from Caltech:
http://www.caltech.edu/news/temperature-swings-black-hole-winds-measured...
Elizabeth Landau
Jet Propulsion Laboratory, Pasadena, Calif.
818-354-6425
elizabeth.landau@jpl.nasa.gov
Whitney Clavin
Caltech, Pasadena, Calif.
626-395-1856
wclavin@caltech.edu
2017-055
Editor: Tony Greicius
Publicado por salud equitativa en 3:43