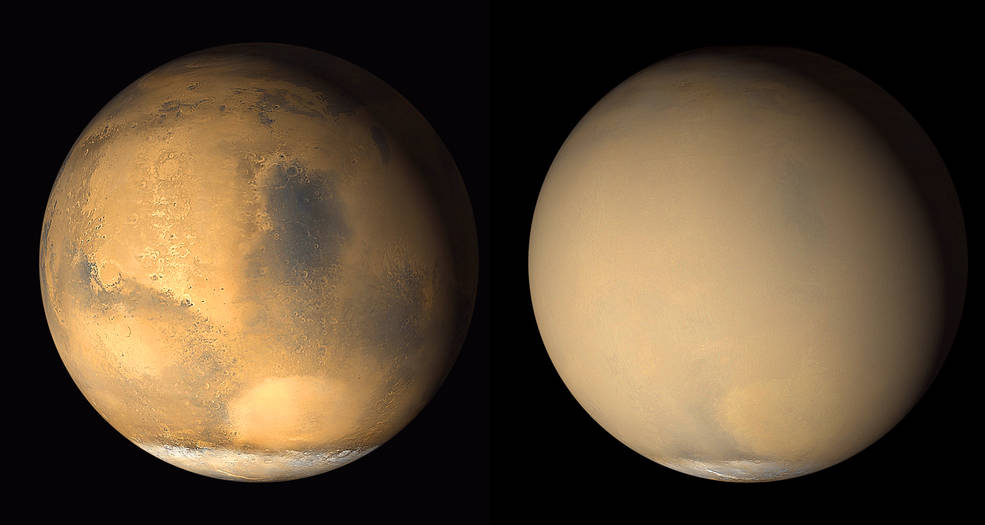 Two 2001 images from the Mars Orbiter Camera on NASA's Mars Global Surveyor orbiter show a dramatic change in the planet's appearance when haze raised by dust-storm activity in the south became globally distributed. The images were taken about a month apart.
Credits: NASA/JPL-Caltech/MSSS
Full image and caption
Some Mars experts are eager and optimistic for a dust storm this year to grow so grand it darkens skies around the entire Red Planet.
This biggest type of phenomenon in the environment of modern Mars could be examined as never before possible, using the combination of spacecraft now at Mars.
A study published this week based on observations by NASA's Mars Reconnaissance Orbiter (MRO) during the most recent Martian global dust storm -- in 2007 -- suggests such storms play a role in the ongoing process of gas escaping from the top of Mars' atmosphere. That process long ago transformed wetter, warmer ancient Mars into today's arid, frozen planet. 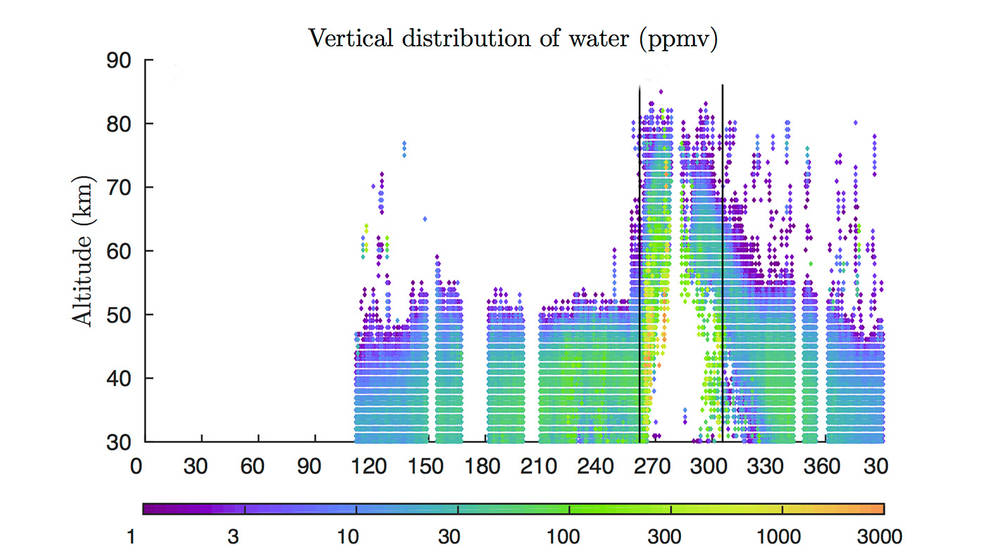 Rising air during a 2007 global dust storm on Mars lofted water vapor into the planet's middle atmosphere, researchers learned from data derived from observations by the Mars Climate Sounder instrument on NASA's Mars Reconnaissance Orbiter.
Credits: NASA/JPL-Caltech/Hampton Univ.
"We found there's an increase in water vapor in the middle atmosphere in connection with dust storms," said Nicholas Heavens of Hampton University, Hampton, Virginia, lead author of the report in Nature Astronomy. "Water vapor is carried up with the same air mass rising with the dust."
A link between the presence of water vapor in Mars' middle atmosphere -- roughly 30 to 60 miles (50 to 100 kilometers) high -- and escape of hydrogen from the top of the atmosphere has been detected by NASA's Hubble Space Telescope and the European Space Agency's Mars Express orbiter, but mainly in years without the dramatic changes produced in a global dust storm. NASA's MAVEN mission arrived at Mars in 2014 to study the process of atmosphere escape.
"It would be great to have a global dust storm we could observe with all the assets now at Mars, and that could happen this year," said David Kass of NASA's Jet Propulsion Laboratory, Pasadena, California. He is a co-author of the new report and deputy principal investigator for the instrument that is the main source of data for it, MRO's Mars Climate Sounder.
Not all Mars watchers are thrilled with the idea of a global dust storm, which can adversely affect ongoing missions. For instance: Opportunity, as a solar powered rover, would have to hunker down to save energy; the upcoming InSight lander's parameters would need to be adjusted for safe entry, descent and landing in November; and all the cameras on rovers and orbiters would need to deal with low visibility.
Decades of Mars observations document a pattern of multiple regional dust storms arising during the northern spring and summer. In most Martian years, which are nearly twice as long as Earth years, all the regional storms dissipate and none swells into a global dust storm. But such expansion happened in 1977, 1982, 1994, 2001 and 2007. The next Martian dust storm season is expected to begin this summer and last into early 2019.
The Mars Climate Sounder on MRO can scan the atmosphere to directly detect dust and ice particles and can indirectly sense water vapor concentrations from effects on temperature. Heavens and co-authors of the new paper report the sounder's data show slight increases in middle-atmosphere water vapor during regional dust storms and reveal a sharp jump in the altitude reached by water vapor during the 2007 global dust storm. Using recently refined analysis methods for the 2007 data, the researchers found an increase in water vapor by more than a hundred-fold in the middle atmosphere during that global storm.
Before MAVEN reached Mars, many scientists expected to see loss of hydrogen from the top of the atmosphere occurring at a rather steady rate, with variation tied to changes in the solar wind's flow of charged particles from the Sun. Data from MAVEN and Mars Express haven't fit that pattern, instead showing a pattern that appears more related to Martian seasons than to solar activity. Heavens and coauthors present the dust storms' hoisting of water vapor to higher altitudes as a likely key to the seasonal pattern in hydrogen escape from the top of the atmosphere. MAVEN observations during the stronger effects of a global dust storm could boost understanding of their possible link to the escape of gas from the atmosphere.
Guy WebsterJet Propulsion Laboratory, Pasadena, Calif.818-354-6278guy.webster@jpl.nasa.gov
Laurie Cantillo / Dwayne BrownNASA Headquarters, Washington202-358-1077 / 202-358-1726laura.l.cantillo@nasa.gov / dwayne.c.brown@nasa.gov
2018-012
Editor: Tony Greicius
Publicado por salud equitativa en 7:56