Combing Through The "X-Ray Files" | NASA

Combing Through The "X-Ray Files" | NASA

In its 20 years of operations, NASA’s Chandra X-ray Observatory has observed hundreds of thousands of X-ray sources across the Universe. These data are stored in a public archive where anyone can access them a year after the observations, if not sooner.
Most of the time, the Chandra archive serves the professional astronomical community for their research purposes, but its value extends far beyond. Some members of the public, including amateur astronomers and space enthusiasts, comb through astronomical archives like the one Chandra maintains. Their work has led to the discovery of new objects, investigatations of mysterious phenomena, and the creation of stunning images of cosmic objects.
A sample of composite images -- that is, those that consist of more than one type of light -- using X-ray data from Chandra and optical light from the Hubble Space Telescope is being released today. This image collection, made by “astronomy artist” Judy Schmidt, helps recognize Archive Month, which is celebrated every October in the United States and promotes the contributions of all types of archives. The software tools, instructions, and tutorials on how to make images from Chandra data are free and available in many locations online, including https://chandra.harvard.edu/photo/2019/archives/.
All of the objects in this new archive collection are located in the Large Magellanic Cloud, or LMC, which is a small satellite galaxy to Milky Way located about 150,000 light years away. The images are:
Top row, from left to right:
N103B: When a thermonuclear explosion destroyed a white dwarf star (the dense final stage in the evolution of a Sun-like star) in a double star system and produced a supernova, it left behind this glowing debris field, called a supernova remnant. The Chandra X-ray data (most clearly visible on the left side of the remnant in red, green and blue) shows multimillion-degree gas that has been heated by a shock wave produced by the explosion that destroyed the star. An optical light image from the Hubble Space Telescope is brightest on the right side of the image, where the overlap with X-rays is mostly in pink and white.
LHA 120-N 44: This region of star formation features a giant bubble that is blowing out from the middle of this image due to winds flowing off young stars. Chandra data (purple and pink) show this superbubble of hot gas, while Hubble data (orange and light blue) reveals the gas and dust in the system.
LMC N63A: After a massive star exploded, it left behind this supernova remnant observed by Chandra and Hubble. The Chandra data (red, green and blue) show multimillion-degree gas and the blast wave from the supernova. The light brown region in the upper right of the remnant is a dense cloud of gas and dust that reflects optical light detected by Hubble. 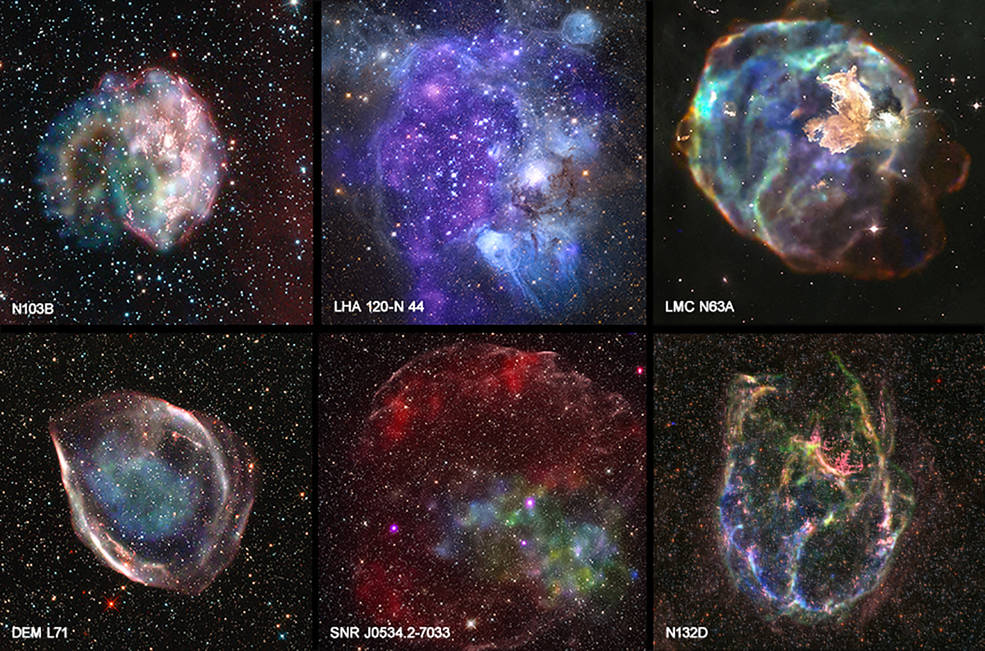 Bottom row, from left to right:
DEM L71: The Chandra image of this supernova remnant (also known as SNR 0505.7-6752) reveals an inner cloud of glowing iron and silicon (green and blue) surrounded by an outer blast wave (red). The outer blast wave, created during the destruction of the white dwarf star, is also seen in optical data from Hubble (red and white).
DEM L238: Another supernova remnant resulting from the explosion of a white dwarf star is revealed in this image of DEM L238, also known as SNR J0534.2-7033. The Chandra image (yellow, green and bright red) shows multimillion-degree gas and the Hubble image shows cooler gas in the system, near the outer border of the remnant in red.
N132D: This is the brightest supernova remnant in either the LMC or its galactic cousin, the Small Magellanic Cloud. N132D also stands out because it belongs to a rare class of supernova remnants that have relatively high levels of oxygen. Scientists think most of the oxygen we breathe came from explosions similar to this one. Here, Chandra data are shown in purple and green and Hubble data are shown in red.
NASA's Marshall Space Flight Center manages the Chandra program. The Smithsonian Astrophysical Observatory’s Chandra X-ray Center controls science and flight operations from Cambridge, Massachusetts.
Editor: Jennifer Harbaugh
Publicado por salud equitativa en 13:41