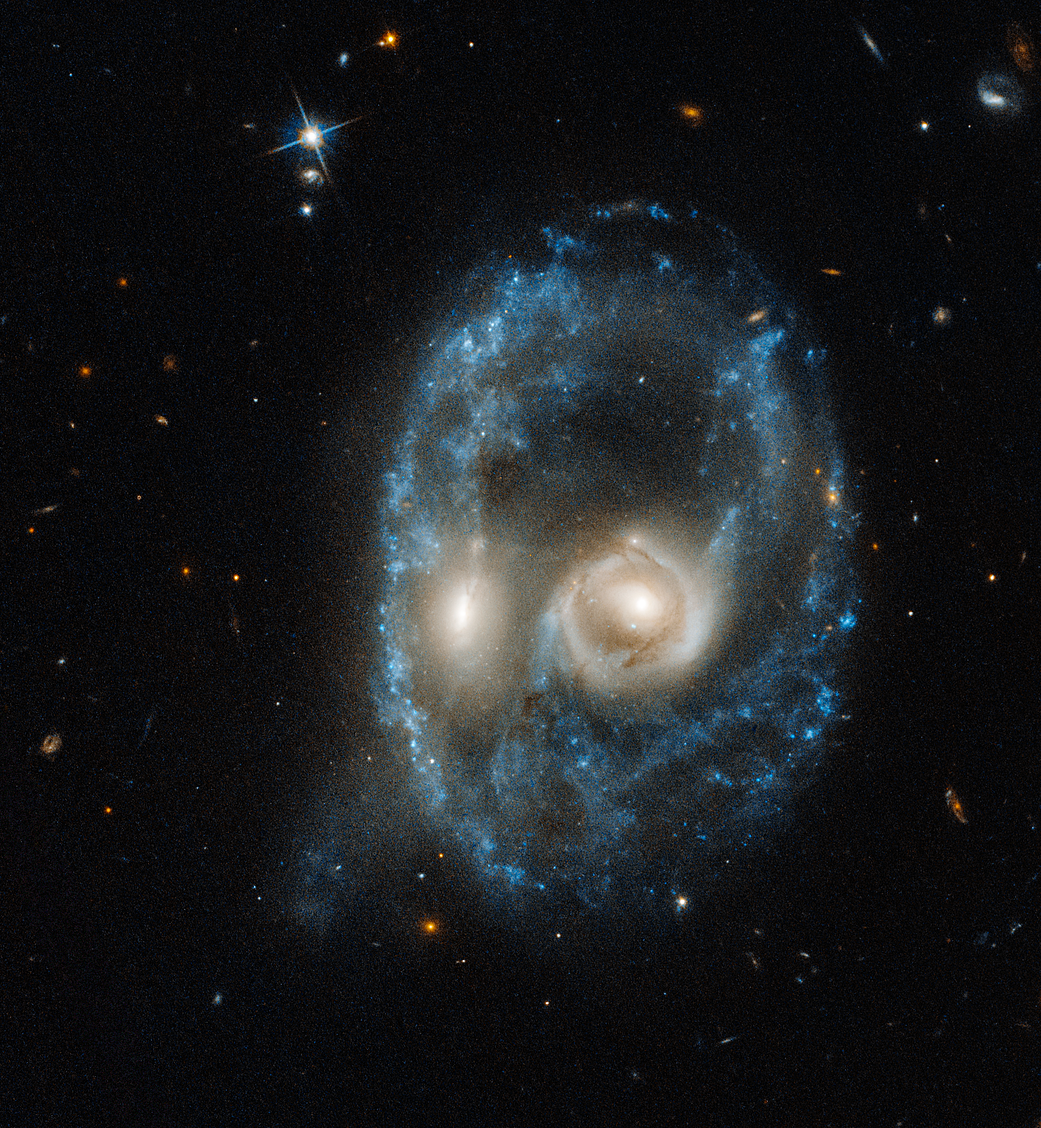 When astronomers peer deep into space, they don't expect to find something staring back at them.
In this new Hubble Space Telescope image, an uncanny pair of glowing eyes glares menacingly in our direction. The piercing "eyes" are the most prominent feature of what resembles the face of an otherworldly creature.
But this is no ghostly apparition. Hubble is looking at a titanic head-on collision between two galaxies.
Each "eye" is the bright core of a galaxy, one of which slammed into another. The outline of the face is a ring of young blue stars. Other clumps of new stars form a nose and mouth. The entire system is catalogued as Arp-Madore 2026-424 (AM 2026-424), from the Arp-Madore "Catalogue of Southern Peculiar Galaxies and Associations."
Although galaxy collisions are common — especially back in the young universe — most of them are not head-on smashups, like the collision that likely created this Arp-Madore system. The violent encounter gives the system an arresting "ring" structure for only a short amount of time, about 100 million years. The crash pulled and stretched the galaxies' disks of gas, dust and stars outward. This action formed the ring of intense star formation that shapes the nose and face.
Ring galaxies are rare; only a few hundred of them reside in our larger cosmic neighborhood. The galaxies have to collide at just the right orientation to create the ring. The galaxies will merge completely in about 1 to 2 billion years, hiding their messy past.
The side-by-side juxtaposition of the two central bulges of stars from both galaxies also is unusual. Because the bulges that make the eyes appear to be the same size, it is evidence that two galaxies of nearly equal proportions were involved in the crash, rather than more common collisions where small galaxies are gobbled up by their larger neighbors.
Hubble observed this unique system as part of a "snapshot" program that takes advantage of occasional gaps in the telescope's observing schedule to squeeze in additional pictures.
Astronomers plan to use this innovative Hubble program to take a close look at many other unusual interacting galaxies. The goal is to compile a robust sample of nearby interacting galaxies, which could offer insight into how galaxies grew over time through galactic mergers. By analyzing these detailed Hubble observations, astronomers could then choose which systems are prime targets for follow-up with NASA's James Webb Space Telescope, scheduled to launch in 2021.
Astronomer Halton Arp published his compendium of 338 unusual-looking interacting galaxies in 1966. He later partnered with astronomer Barry Madore to extend the search for unique galactic encounters in the southern sky. Several thousand galaxies are listed in that survey, published in 1987.
The Hubble image of AM 2026-424 was taken June 19, 2019, in visible light by the Advanced Camera for Surveys. The system resides 704 million light-years from Earth.
Credits: NASA's Goddard Space Flight Center; Bradley A Hague (USRA), Producer / Editor
Text credit:  Donna Weaver, Space Telescope Science Institute, BaltimoreImage credit: NASA, ESA, and J. Dalcanton, B.F. Williams, and M. Durbin (University of Washington)
Contact: Claire Andreoli, Goddard Space Flight Center
Editor: Lynn Jenner
Publicado por salud equitativa en 13:40