Posters Are a Halloween Treat 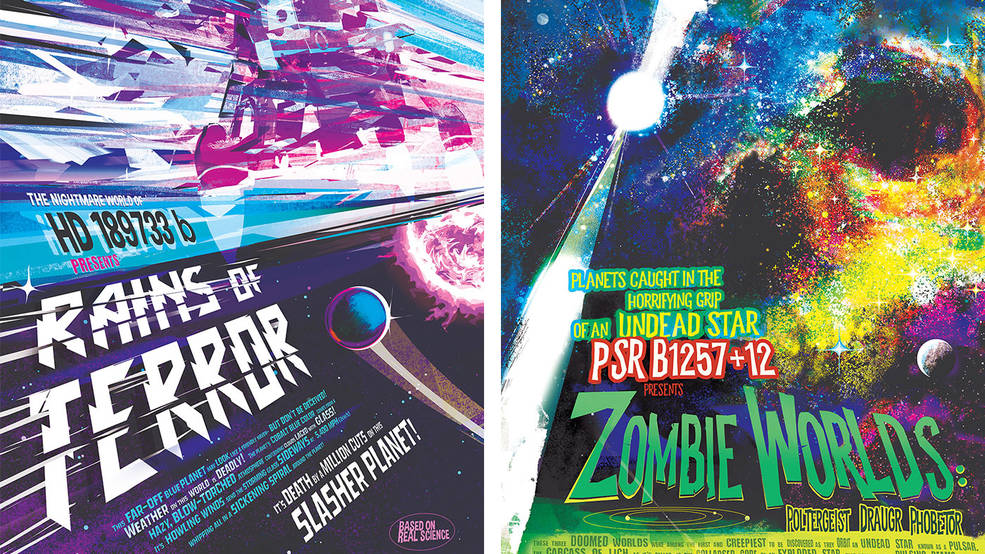 Free to download, new posters from NASA's Exoplanet Exploration Program feature horrifyingly inhospitable planets located outside our solar system.
Credits: NASA/JPL-Caltech
Just in time for Halloween, NASA has released two new posters celebrating some truly terrifying exoplanets, or planets outside our solar system. Free to download, the entertaining posters recall vintage horror movie advertisements but have a decidedly astronomical focus.
Dubbed Galaxy of Horrors, the fun but informative series resulted from a collaboration of scientists and artists and was produced by NASA's Exoplanet Exploration Program Office, located at NASA's Jet Propulsion Laboratory in Pasadena, California. The same program is behind the popular Exoplanet Travel Bureau poster series, which imagines humans visiting some of the thousands of known worlds outside our solar system.
Lurking beyond our solar system, among the billions of stars and the exoplanets that orbit them, is another sort of Milky Way altogether. Our "Galaxy of Horrors" reveals the sinister science behind real worlds we’ve discovered in our galaxy.
Credits: NASA/JPL-Caltech
Among the horrifyingly inhospitable worlds highlighted in the latest posters is HD 189733 b, a planet with an atmosphere full of silicates — the key component in sand and glass — and winds blowing at over 5,400 mph (6,700 kph). At those speeds, the silicates whipping through the air might create a perpetual storm of flying glass. If human or robotic explorers could travel 63 light-years from Earth to get there, they would never survive this planetary hellscape.
The second poster features three planets — Poltergeist, Draugr and Phobetor — orbiting the pulsar PSR B1257+12, located about 2,000 light-years from Earth. Sometimes called a "dead star," a pulsar is the remains of a star that has ceased burning fuel at its core and collapsed. But it isn't a quiet corpse. Like other pulsars, PSRB 1257+12 produces dual beams of intense radiation that can sometimes be seen across the galaxy. Stray radiation and high-energy particles would attack the three nearby planets. Life as we know it could never form on these worlds.
"People are often most interested in finding exoplanets that could resemble Earth or potentially support life as we know it," said Thalia Rivera, an outreach specialist at JPL who led the development of the new poster series. "But there are so many other amazing, mystifying planets out there that are completely unlike Earth and that show us the huge variety of ways planets can form and evolve. My favorite thing about exoplanets is how extreme they can get!"
Scientists have discovered over 4,000 exoplanets, with a majority of those detected in the last 15 years by NASA's now-retired Kepler space telescope. NASA has multiple missions searching for and studying exoplanets, including the Transiting Exoplanet Survey Satellite (TESS), the Hubble Space Telescope and the Spitzer Space Telescope. They will be joined by upcoming missions, including the James Webb Space Telescope, set to launch in 2021, and the Wide Field Infrared Survey Telescope (WFIRST), scheduled to launch in the mid-2020s.
The Exoplanet Exploration Program manages science and engineering tasks in support of NASA's search for exoplanets. In addition, the program helps engage the public about exoplanet science and increases awareness of NASA's exoplanet activities.
"In practical terms, I think for many people the posters are an entryway," said Gary Blackwood, manager of the Exoplanet Exploration Program. "They make exoplanet science cool, and that opens a door for many members of the public — especially students — to learn more about the science behind the posters."
To download the new posters for free and to learn more about these inhospitable exoplanets as well as other terrifying worlds visit the Galaxy of Horrors webpage:
https://exoplanets.nasa.gov/alien-worlds/galaxy-of-horrors/
Even more examples of weird worlds can be found in the Eyes on Exoplanet web application:
https://exoplanets.nasa.gov/eyes-on-exoplanets/
Click on "Explore Planets," and go to the "Weird Worlds" tab.
Calla CofieldJet Propulsion Laboratory, Pasadena, Calif.626-808-2469calla.e.cofield@jpl.nasa.gov
2019-214
Editor: Randal Jackson
Publicado por salud equitativa en 13:39