New results from the NASA/ESA Hubble Space Telescope suggest the formation of the first stars and galaxies in the early universe took place sooner than previously thought. A European team of astronomers have found no evidence of the first generation of stars, known as Population III stars, as far back as when the universe was just 500 million years old.
The exploration of the very first galaxies remains a significant challenge in modern astronomy. We do not know when or how the first stars and galaxies in the universe formed. These questions can be addressed with the Hubble Space Telescope through deep imaging observations. Hubble allows astronomers to view the universe back to within 500 million years of the big bang. 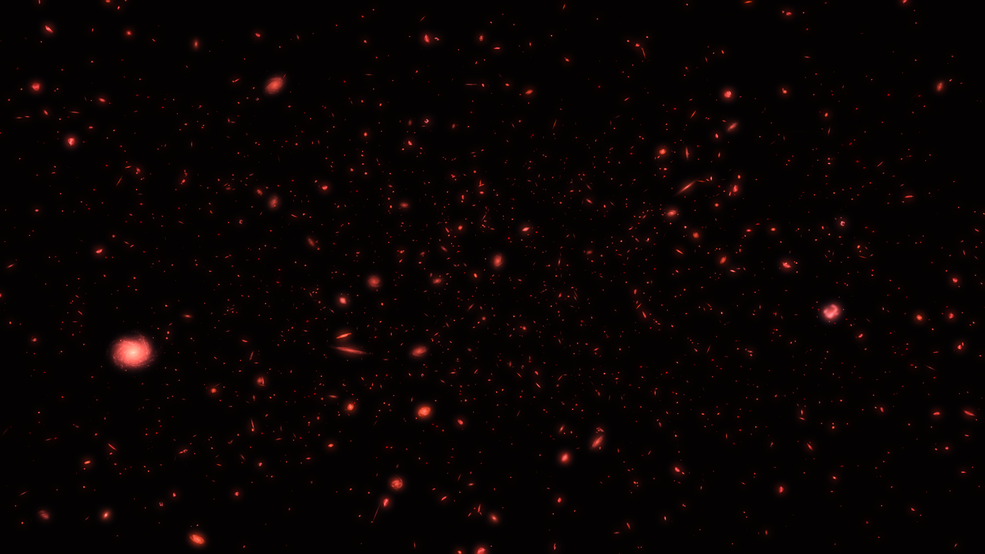 New results from the Hubble Space Telescope suggest the formation of the first stars and galaxies in the early universe took place sooner than previously thought. A European team of astronomers have found no evidence of the first generation of stars, known as Population III stars, when the universe was less than 1 billion years old. This artist's impression presents the early universe.
Credits: ESA/Hubble, M. Kornmesser and NASA
A team of European researchers, led by Rachana Bhatawdekar of ESA (the European Space Agency), set out to study the first generation of stars in the early universe. Known as Population III stars, these stars were forged from the primordial material that emerged from the big bang. Population III stars must have been made solely out of hydrogen, helium and lithium, the only elements that existed before processes in the cores of these stars could create heavier elements, such as oxygen, nitrogen, carbon and iron.
Bhatawdekar and her team probed the early universe from about 500 million to 1 billion years after the big bang by studying the cluster MACS J0416 and its parallel field with the Hubble Space Telescope (with supporting data from NASA's Spitzer Space Telescope and the ground-based Very Large Telescope of the European Southern Observatory). "We found no evidence of these first-generation Population III stars in this cosmic time interval," said Bhatawdekar of the new results. 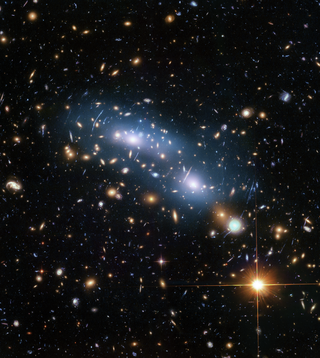 This image from the NASA/ESA Hubble Space Telescope shows the galaxy cluster MACS J0416. This is one of six galaxy clusters being studied by the Hubble Frontier Fields program, which produced the deepest images of gravitational lensing ever made. Scientists used intracluster light (visible in blue) to study the distribution of dark matter within the cluster.
Credits: NASA, ESA and M. Montes (University of New South Wales)
The result was achieved using the Hubble Space Telescope's Wide Field Camera 3 and Advanced Camera for Surveys, as part of the Hubble Frontier Fields program. This program (which observed six distant galaxy clusters from 2012 to 2017) produced the deepest observations ever made of galaxy clusters and the galaxies located behind them which were magnified by the gravitational lensing effect, thereby revealing galaxies 10 to 100 times fainter than any previously observed. The masses of foreground galaxy clusters are large enough to bend and magnify the light from the more distant objects behind them. This allows Hubble to use these cosmic magnifying glasses to study objects that are beyond its nominal operational capabilities.
Bhatawdekar and her team developed a new technique that removes the light from the bright foreground galaxies that constitute these gravitational lenses. This allowed them to discover galaxies with lower masses than ever previously observed with Hubble, at a distance corresponding to when the universe was less than a billion years old. At this point in cosmic time, the lack of evidence for exotic stellar populations and the identification of many low-mass galaxies supports the suggestion that these galaxies are the most likely candidates for the reionization of the universe. This period of reionization in the early universe is when the neutral intergalactic medium was ionized by the first stars and galaxies.
"These results have profound astrophysical consequences as they show that galaxies must have formed much earlier than we thought," said Bhatawdekar. "This also strongly supports the idea that low-mass/faint galaxies in the early universe are responsible for reionization."
These results also suggest that the earliest formation of stars and galaxies occurred much earlier than can be probed with the Hubble Space Telescope. This leaves an exciting area of further research for the upcoming NASA/ESA/CSA James Webb Space Telescope — to study the universe's earliest galaxies.
These results are based on a previous 2019 paper by Bhatawdekar et al., and a paper that will appear in an upcoming issue of the Monthly Notices of the Royal Astronomical Society (MNRAS). These results are also being presented at a press conference during the 236th meeting of American Astronomical Society.
The European team of astronomers in this study consists of R. Bhatawdekar and C.J. Conselice.
The Hubble Space Telescope is a project of international cooperation between NASA and ESA (European Space Agency). NASA’s Goddard Space Flight Center in Greenbelt, Maryland, manages the telescope. The Space Telescope Science Institute (STScI) in Baltimore conducts Hubble science operations. STScI is operated for NASA by the Association of Universities for Research in Astronomy in Washington, D.C.
Claire AndreoliNASA's Goddard Space Flight Center, Greenbelt, Md.301-286-1940claire.andreoli@nasa.gov
Bethany DownerESA/Hubble, Garching, Germanybethany.downer@partner.eso.org
Rachana BhatawdekarESA / ESTEC, Noordwijk, The Netherlandsrachana.bhatawdekar@esa.int
Ray VillardSpace Telescope Science Institute, Baltimore, Maryland410-338-4514villard@stsci.edu
Editor: Rob Garner
Publicado por salud equitativa en 10:50