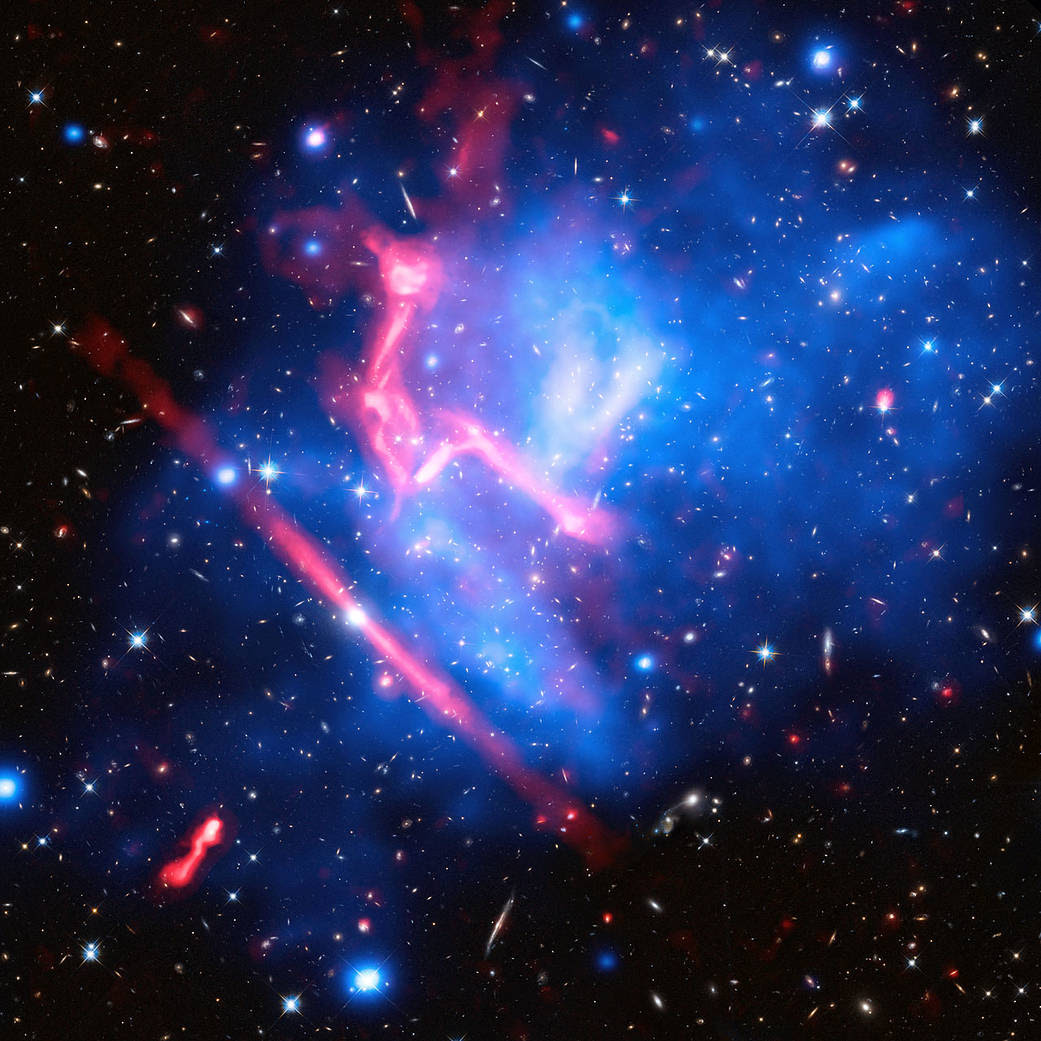 In October 2013 Hubble kicked off the Frontier Fields program, a three-year series of observations aiming to produce the deepest ever views of the Universe. The project’s targets comprise six massive galaxy clusters, enormous collections of hundreds or even thousands of galaxies. These structures are the largest gravitationally-bound objects in the cosmos.
One of the Frontier Fields targets is shown in this new image: MACS J0717.5+3745, or MACS J0717 for short. MACS J0717 is located about 5.4 billion light-years away from Earth, in the constellation of Auriga (The Charioteer). It is one of the most complex galaxy clusters known; rather than being a single cluster, it is actually the result of four galaxy clusters colliding.
This image is a combination of observations from the NASA/ESA Hubble Space Telescope (showing the galaxies and stars), the NASA Chandra X-ray Observatory (diffuse emission in blue), and the NRAO Jansky Very Large Array (diffuse emission in pink). The Hubble data were collected as part of theFrontier Fields program mentioned above.
Together, the three datasets produce a unique new view of MACS J0717. The Hubble data reveal galaxies both within the cluster and far behind it, and the Chandra observations show bright pockets of scorching gas — heated to millions of degrees. The data collected by the Jansky Very Large Array trace the radio emission within the cluster, enormous shock waves — similar to sonic booms — that were triggered by the violent merger.
For more information on Frontier Fields, see Hubblecast 90: The final frontier or www.nasa.gov/hubble
Image credit: NASA, ESA, CXC, NRAO/AUI/NSF, STScI, and R. van Weeren (Harvard-Smithsonian Center for Astrophysics), Acknowledgment: NASA, ESA, and J. Lotz (STScI), and the HFF teamText credit: European Space Agency
Editor: Ashley Morrow 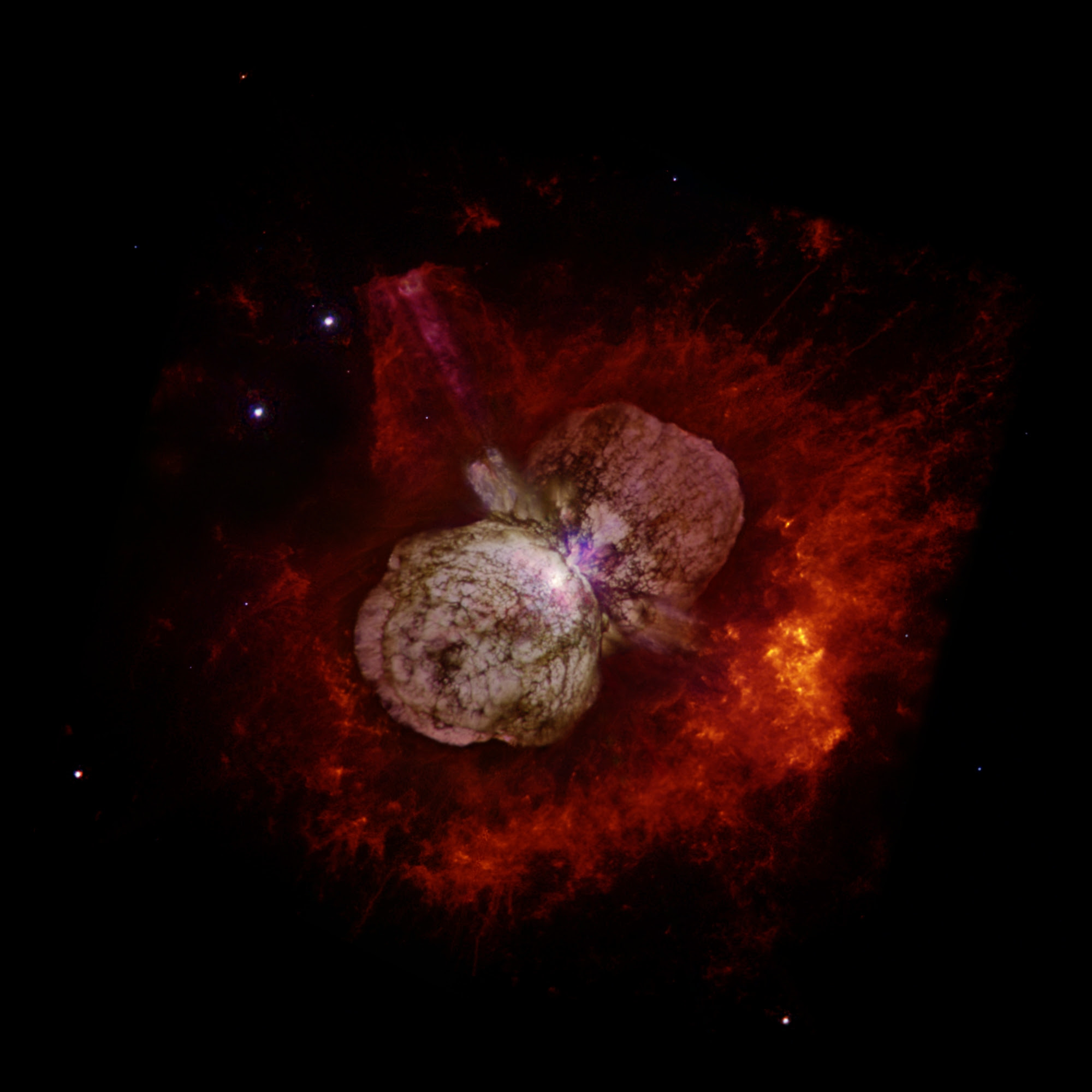 Superstar Eta Carinae in Other 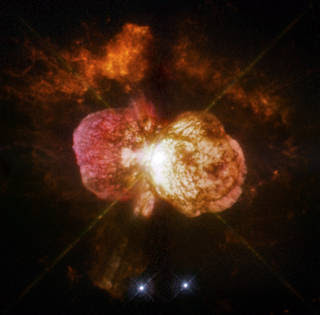 Eta Carinae's great eruption in the 1840s created the billowing Homunculus Nebula, imaged here by Hubble, and transformed the binary into a unique object in our galaxy. Astronomers cannot yet explain what caused this eruption. The discovery of likely Eta Carinae twins in other galaxies will help scientists better understand this brief phase in the life of a massive star.
Credits: NASA, ESA, and the Hubble SM4 ERO Team
Eta Carinae, the most luminous and massive stellar system within 10,000 light-years, is best known for an enormous eruption seen in the mid-19th century that hurled at least 10 times the sun's mass into space. This expanding veil of gas and dust, which still shrouds Eta Carinae, makes it the only object of its kind known in our galaxy. Now a study using archival data from NASA's Spitzer and Hubble space telescopes has found five objects with similar properties in other galaxies for the first time.
"The most massive stars are always rare, but they have tremendous impact on the chemical and physical evolution of their host galaxy," said lead scientist Rubab Khan, a postdoctoral researcher at NASA's Goddard Space Flight Center in Greenbelt, Maryland. These stars produce and distribute large amounts of the chemical elements vital to life and eventually explode as supernovae.
Located about 7,500 light-years away in the southern constellation of Carina, Eta Carinae outshines our sun by 5 million times. The binary system consists of two massive stars in a tight 5.5-year orbit. Astronomers estimate that the more massive star has about 90 times the sun’s mass, while the smaller companion may exceed 30 solar masses.
As one of the nearest laboratories for studying high-mass stars, Eta Carinae has been a unique astronomical touchstone since its eruption in the 1840s. To understand why the eruption occurred and how it relates to the evolution of massive stars, astronomers needed additional examples. Catching rare stars during the short-lived aftermath of a major outburst approaches needle-and-haystack levels of difficulty, and nothing matching Eta Carinae had been found prior to Khan's study.
"We knew others were out there," said co-investigator Krzysztof Stanek, a professor of astronomy at Ohio State University in Columbus. "It was really a matter of figuring out what to look for and of being persistent."
Working with Scott Adams and Christopher Kochanek at Ohio State and George Sonneborn at Goddard, Khan developed a kind of optical and infrared fingerprint for identifying possible Eta Carinae twins, or "Eta twins" for short.
Dust forms in gas ejected by a massive star. This dust dims the star’s ultraviolet and visible light, but it absorbs and reradiates this energy as heat at longer mid-infrared wavelengths. "With Spitzer we see a steady increase in brightness starting at around 3 microns and peaking between 8 and 24 microns," explained Khan. "By comparing this emission to the dimming we see in Hubble's optical images, we could determine how much dust was present and compare it to the amount we see around Eta Carinae."
An initial survey of seven galaxies from 2012 to 2014 didn't turn up any Eta twins, underscoring their rarity. It did, however, identify a class of less massive and less luminous stars of scientific interest, demonstrating the search was sensitive enough to find Eta Carinae-like stars had they been present. 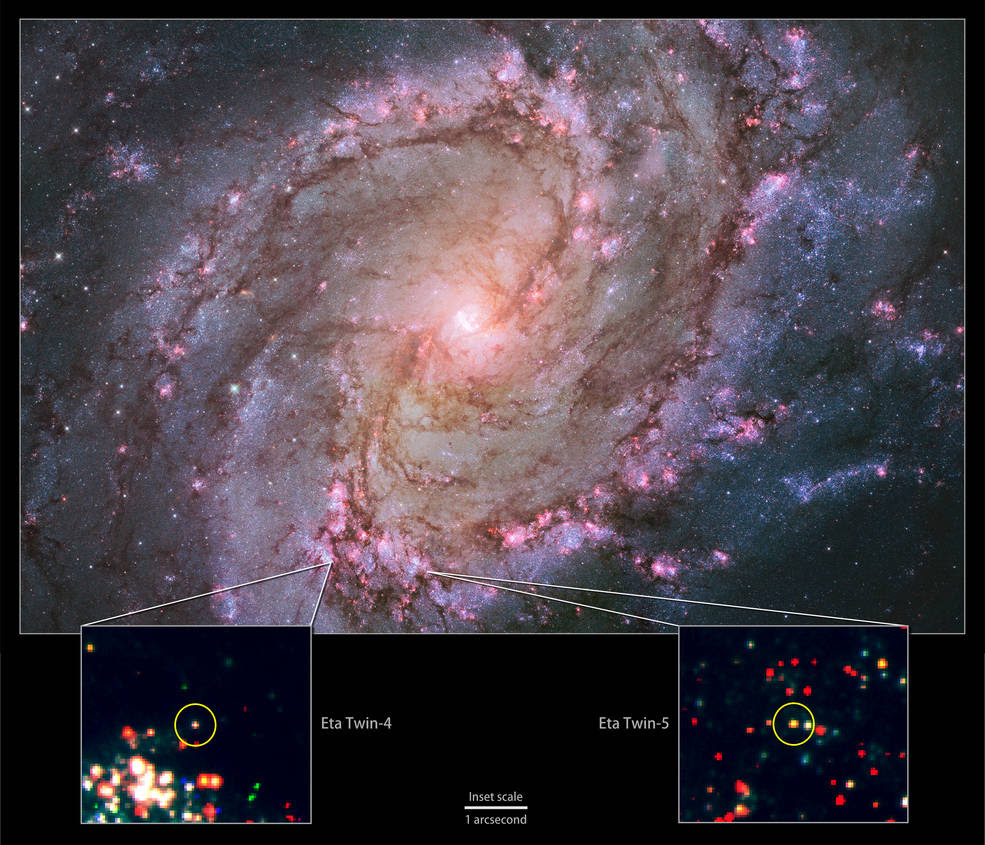 The nearby spiral galaxy M83 is currently the only one known to host two potential Eta Carinae twins. This composite of images from the Hubble Space Telescope's Wide Field Camera 3 instrument shows a galaxy ablaze with newly formed stars. A high rate of star formation increases the chances of finding massive stars that have recently undergone an Eta Carinae-like outburst. Bottom: Insets zoom into Hubble data to show the locations of M83's Eta twins.
Credits: NASA, ESA, the Hubble Heritage Team (STScI/AURA) and R. Khan (GSFC and ORAU)
In a follow-on survey in 2015, the team found two candidate Eta twins in the galaxy M83, located 15 million light-years away, and one each in NGC 6946, M101 and M51, located between 18 and 26 million light-years away. These five objects mimic the optical and infrared properties of Eta Carinae, indicating that each very likely contains a high mass star buried in five to 10 solar masses of gas and dust. Further study will let astronomers more precisely determine their physical properties. The findings were published in the Dec. 20 edition of The Astrophysical Journal Letters.

Researchers found likely Eta twins in four galaxies by comparing the infrared and optical brightness of each candidate source. Infrared images from NASA's Spitzer Space Telescope revealed the presence of warm dust surrounding the stars. Comparing this information with the brightness of each source at optical and near-infrared wavelengths as measured by instruments on Hubble, the team was able to identify candidate Eta Carinae-like objects. Top: 3.6-micron images of candidate Eta twins from Spitzer's IRAC instrument. Bottom: 800-nanometer images of the same sources from various Hubble instruments.
Credits: NASA, ESA, and R. Khan (GSFC and ORAU)
NASA's James Webb Space Telescope, set to launch in late 2018, carries an instrument ideally suited for further study of these stars. The Mid-Infrared Instrument (MIRI) has 10 times the angular resolution of instruments aboard Spitzer and is most sensitive at the wavelengths where Eta twins shine brightest. "Combined with Webb's larger primary mirror, MIRI will enable astronomers to better study these rare stellar laboratories and to find additional sources in this fascinating phase of stellar evolution," said Sonneborn, NASA's project scientist for Webb telescope operations. It will take Webb observations to confirm the Eta twins as true relatives of Eta Carinae.
The Spitzer Space Telescope is managed by NASA's Jet Propulsion Laboratory in Pasadena, California. The Spitzer Science Center at the California Institute of Technology in Pasadena conducts science operations.
The Hubble Space Telescope is a project of international cooperation between NASA and the European Space Agency. NASA's Goddard Space Flight Center manages the telescope. The Space Telescope Science Institute (STScI) in Baltimore, Maryland, conducts Hubble science operations. STScI is operated for NASA by the Association of Universities for Research in Astronomy in Washington, D.C.
For more information about Spitzer, visit:
http://www.nasa.gov/spitzer
For more information about Hubble, visit:
http://www.nasa.gov/hubble
Francis ReddyNASA's Goddard Space Flight Center, Greenbelt, Maryland
Editor: Ashley Morrow