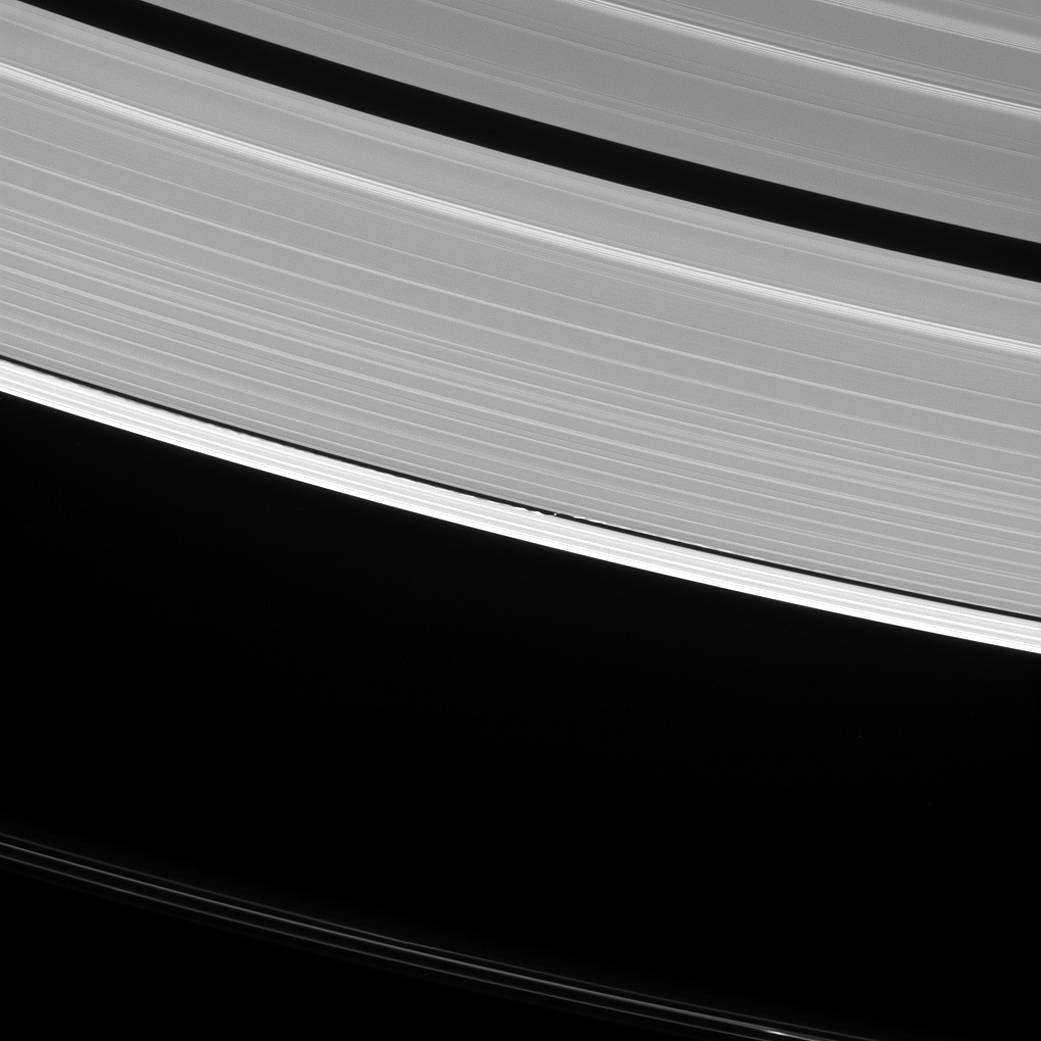 Saturn's moon Daphnis raises waves wherever it goes. In fact, such waves are one way that scientists search for undiscovered moons in the ring gaps. But they can tell researchers a lot of other things, as well.
The waves that Daphnis (5 miles or 8 kilometers across) raises on the edges of the Keeler Gap can also be used to deduce the moon's mass and even some of its orbital behavior. Since the moon moves in and out of the ring-plane, and closer to and farther from the rings' edges as it orbits, the waves it makes change over time. Cassini has been observing these changes during its extended study of the Saturn system to help understand this interaction.
For more about the effects of the vertical motion of Daphnis, see PIA11656.
This view looks toward the sunlit side of the rings from about 35 degrees above the ring plane. The image was taken in visible light with the Cassini spacecraft narrow-angle camera on Oct. 10, 2016.
Daphnis has been brightened by a factor of two in this image to increase its visibility.
The view was obtained at a distance of approximately 810,000 miles (1.3 million kilometers) from Daphnis and at a Sun-Daphnis-spacecraft, or phase, angle of 96 degrees. Image scale is 5 miles (8 kilometers) per pixel.
The Cassini mission is a cooperative project of NASA, ESA (the European Space Agency) and the Italian Space Agency. The Jet Propulsion Laboratory, a division of the California Institute of Technology in Pasadena, manages the mission for NASA's Science Mission Directorate, Washington. The Cassini orbiter and its two onboard cameras were designed, developed and assembled at JPL. The imaging operations center is based at the Space Science Institute in Boulder, Colorado.
For more information about the Cassini-Huygens mission visit http://saturn.jpl.nasa.gov and http://www.nasa.gov/cassini. The Cassini imaging team homepage is at http://ciclops.org.
Credit: NASA/JPL-Caltech/Space Science Institute
Editor: Tony Greicius