NASA’s first mission to return a sample of an asteroid to Earth will be multitasking during its two-year outbound cruise to the asteroid Bennu. On Feb. 9-20, the OSIRIS-REx (Origins, Spectral Interpretation, Resource Identification, and Security– Regolith Explorer) spacecraft will activate its onboard camera suite and commence a search for elusive “Trojan” asteroids. 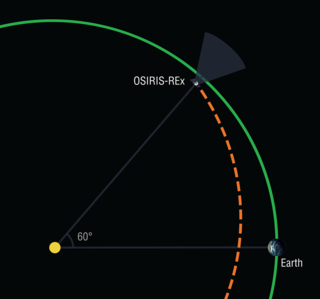 There are six planets in our solar system with known Trojan asteroids—Jupiter, Neptune, Mars, Venus, Uranus and, yes, even Earth. The Earth Trojan is elusive; to date, scientists have only discovered one Earth trojan asteroid -- 2010 TK7  -- found by NASA’s NEOWISE project in 2010. Yet there are more than 6,000 known Trojans that are co-orbiting the sun with the gas giant Jupiter.
Scientists predict that there should be more Trojans sharing Earth’s orbit, but these asteroids are difficult to detect from Earth because they appear close to the sun from Earth's point of view. In mid-February 2017, however, the OSIRIS-REx spacecraft will be positioned in an ideal spot to undertake a survey.
Over 12 days, the OSIRIS-REx Earth-Trojan asteroid search will employ the spacecraft’s MapCam imager to methodically scan the space where Earth Trojans are expected to exist.  Many of these observations will closely resemble MapCam’s planned activities during its upcoming search for satellites of asteroid Bennu, so the Trojan asteroid search serves as an early rehearsal for the mission's primary science operations.
“The Earth-Trojan asteroid search provides a substantial advantage to the OSIRIS-REx mission,” said OSIRIS-REx Principal Investigator Dante Lauretta of the University of Arizona, Tucson. “Not only do we have the opportunity to discover new members of an asteroid class, but more importantly, we are practicing critical mission operations in advance of our arrival at Bennu, which ultimately reduces mission risk.”
The OSIRIS-REx spacecraft is currently on a seven-year journey to rendezvous with, study, and bring a sample of Bennu to Earth. This sample of a primitive asteroid will help scientists understand the formation of our solar system more than 4.5 billion years ago.
NASA’s Goddard Space Flight Center provides overall mission management, systems engineering and the safety and mission assurance for OSIRIS-REx. Dante Lauretta of the University of Arizona, Tucson, is the principal investigator, and the University of Arizona also leads the science team and the mission’s science observation planning and data processing. Lockheed Martin Space Systems in Denver built the spacecraft and is providing flight operations. Goddard and KinetX Aerospace are responsible for navigating the OSIRIS-REx spacecraft. OSIRIS-REx is the third mission in NASA’s New Frontiers Program. NASA’s Marshall Space Flight Center in Huntsville, Alabama, manages the agency’s New Frontiers Program for its Science Mission Directorate in Washington.
Nancy Neal JonesNASA's Goddard Space Flight Center, Greenbelt, Maryland
Editor: Karl Hille
Publicado por salud equitativa en 9:26