on Mars May Become 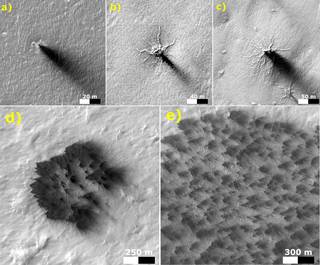 These five images from the HiRISE camera on NASA's Mars Reconnaissance Orbiter show different Martian features of progressively greater size and complexity, all thought to result from thawing of seasonal carbon dioxide ice that covers large areas near Mars' south pole during winter.
Credits: NASA/JPL-Caltech/Univ. of Arizona
Full image and caption
Erosion-carved troughs that grow and branch during multiple Martian years may be infant versions of larger features known as Martian "spiders," which are radially patterned channels found only in the south polar region of Mars.
Researchers using NASA's Mars Reconnaissance Orbiter (MRO) report the first detection of cumulative growth, from one Martian spring to another, of channels resulting from the same thawing-carbon-dioxide process believed to form the spider-like features.
The spiders range in size from tens to hundreds of yards (or meters). Multiple channels typically converge at a central pit, resembling the legs and body of a spider. For the past decade, researchers have checked in vain with MRO's High Resolution Imaging Science Experiment (HiRISE) camera to see year-to-year changes in them.
"We have seen for the first time these smaller features that survive and extend from year to year, and this is how the larger spiders get started," said Ganna Portyankina of the University of Colorado, Boulder. "These are in sand-dune areas, so we don't know whether they will keep getting bigger or will disappear under moving sand."
Dunes appear to be a factor in how the baby spiders form, but they may also keep many from persisting through the centuries needed to become full-scale spiders. The amount of erosion needed to sculpt a typical spider, at the rate determined from observing active growth of these smaller troughs, would require more than a thousand Martian years. That is according to an estimate by Portyankina and co-authors in a recent paper in the journal Icarus. One Martian year lasts about 1.9 Earth years.
"Much of Mars looks like Utah if you stripped away all vegetation, but 'spiders' are a uniquely Martian landform," said Candice Hansen of the Planetary Science Institute, Tucson, Arizona, a co-author of the report.
Carbon-dioxide ice, better known as "dry ice," does not occur naturally on Earth. On Mars, sheets of it cover the ground during winter in areas near both poles, including the south-polar regions with spidery terrain. Dark fans appear in these areas each spring.
Hugh Kieffer of the Space Science Institute in Boulder put those factors together in 2007 to deduce the process linking them: Spring sunshine penetrates the ice to warm the ground underneath, causing some carbon dioxide on the bottom of the sheet to thaw into gas. The trapped gas builds pressure until a crack forms in the ice sheet. Gas erupts out, and gas beneath the ice rushes toward the vent, picking up particles of sand and dust. This erodes the ground and also supplies the geyser with particles that fall back to the surface, downwind, and appear as the dark spring fans.
This explanation has been well accepted, but actually seeing a ground-erosion process that could eventually yield the spider shapes proved elusive. Six years ago, researchers using HiRISE reported small furrows appearing on sand dunes near Mars' north pole at sites where eruptions through dry ice had deposited spring fans. However, those furrows in the far north disappear within a year, apparently refilled with sand.
The newly reported troughs near the south pole are also at spring-fan sites. They have not only persisted and grown through three Mars years so far, but they also formed branches as they extended. The branching pattern resembles the spidery terrain.
"There are dunes where we see these dendritic [or branching] troughs in the south, but in this area, there is less sand than around the north pole," Portyankina said. "I think the sand is what jump starts the process of carving a channel in the ground."
Harder ground lies beneath the sand. Forming a spider may require ground soft enough to be carved, but not so loose that it refills the channels, as in the north. The new research sheds light on how carbon dioxide shapes Mars in unearthly ways.
MRO began orbiting Mars in 2006. "The combination of very high-resolution imaging and the mission's longevity is enabling us to investigate active processes on Mars that produce detectable changes on time spans of seasons or years," said MRO Deputy Project Scientist Leslie Tamppari of NASA's Jet Propulsion Laboratory, Pasadena, California. "We keep getting surprises about how dynamic Mars is."
The University of Arizona, Tucson, operates HiRISE, which was built by Ball Aerospace & Technologies Corp. of Boulder. JPL, a division of Caltech in Pasadena, California, manages the MRO Project for NASA's Science Mission Directorate, Washington. Lockheed Martin Space Systems, Denver, built the orbiter and collaborates with JPL to operate it. For additional information about the project, visit:
http://mars.nasa.gov/mro
Guy WebsterJet Propulsion Laboratory, Pasadena, Calif.818-354-6278guy.webster@jpl.nasa.gov
Alan FischerPlanetary Science Institute, Tucson, Ariz.520-382-0411fischer@psi.edu
Laurie Cantillo / Dwayne BrownNASA Headquarters, Washington2202-358-1077 / 202-358-1726laura.l.cantillo@nasa.gov / dwayne.c.brown@nasa.gov
2016-325
Editor: Tony Greicius