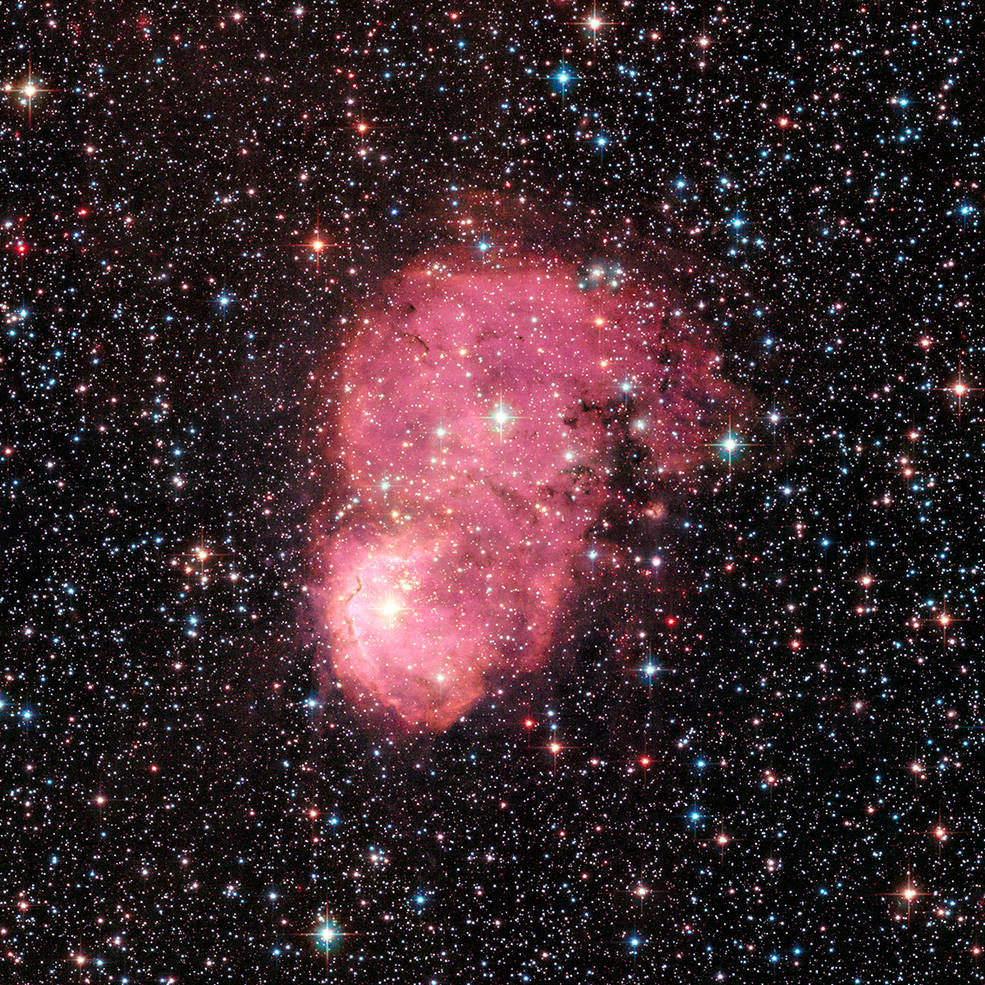 The data used in this image were taken with Hubble’s Advanced Camera for Surveys in September 2015.
Credits: NASA, ESA, STScI, K. Sandstrom (University of California, San Diego), and the SMIDGE team
NASA’s Hubble Space Telescope captured two festive-looking nebulas, situated so as to appear as one. They reside in the Small Magellanic Cloud, a dwarf galaxy that is a satellite of our Milky Way galaxy. Intense radiation from the brilliant central stars is heating hydrogen in each of the nebulas, causing them to glow red.
The nebulas, together, are called NGC 248. They were discovered in 1834 by the astronomer Sir John Herschel. NGC 248 is about 60 light-years long and 20 light-years wide. It is among a number of glowing hydrogen nebulas in the dwarf satellite galaxy, which is located approximately 200,000 light-years away in the southern constellation Tucana.
The image is part of a study called Small Magellanic Cloud Investigation of Dust and Gas Evolution (SMIDGE). Astronomers are using Hubble to probe the Milky Way satellite to understand how dust is different in galaxies that have a far lower supply of heavy elements needed to create dust. The Small Magellanic Cloud has between a fifth and a tenth of the amount of heavy elements that the Milky Way does. Because it is so close, astronomers can study its dust in great detail, and learn about what dust was like earlier in the history of the universe. “It is important for understanding the history of our own galaxy, too,” explained the study’s principal investigator, Dr. Karin Sandstrom of the University of California, San Diego. Most of the star formation happened earlier in the universe, at a time where there was a much lower percentage of heavy elements than there is now. “Dust is a really critical part of how a galaxy works, how it forms stars,” said Sandstrom.
For image files and more information about NGC 248 and Hubble, visit:
http://hubblesite.org/news/2016/42
http://www.nasa.gov/hubble
For additional information, contact:
Ann Jenkins / Ray VillardSpace Telescope Science Institute, Baltimore, Maryland410-338-4488 / 410-338-4514jenkins@stsci.edu / villard@stsci.edu
Karin SandstromUniversity of California, San Diego, California858-246-0552kmsandstrom@ucsd.edu
Editor: Karl Hille
Publicado por salud equitativa en 7:24