A Closer Look at 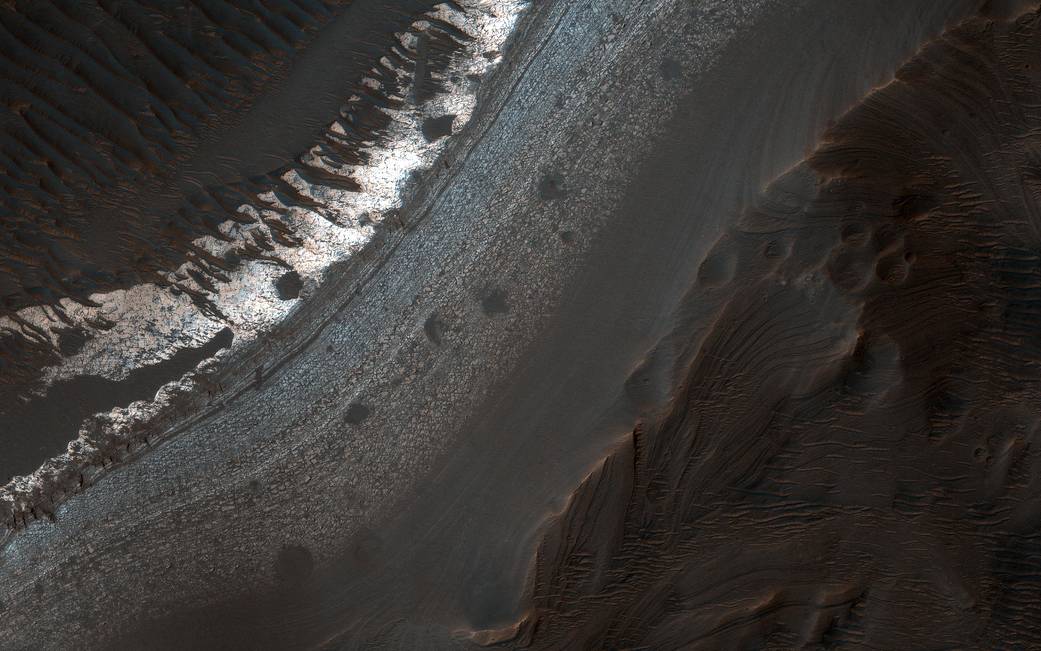 Holden Crater in southern Margaritifer Terra displays a series of finely layered deposits on its floor (white and light purple in an enhanced color image). The layered deposits are especially well exposed in the southwestern section of the crater where erosion by water flowing through a breach in the crater rim created spectacular outcrops.
In this location, the deposits appear beneath a cap of alluvial fan materials (tan to brown in this image). Within the deposits, individual layers are nearly flat-lying and can be traced for hundreds of meters to kilometers. Information from the CRISM instrument on the Mars Reconnaissance Orbiter suggests that at least some of these beds contain clays.
By contrast, the beds in the overlying alluvial fan are less continuous and dip in varying directions, showing less evidence for clays. Collectively, the characteristics of the finely bedded deposits suggest they may have been deposited into a lake on the crater floor, perhaps fed by runoff related to formation of the overlying fans.
The map is projected here at a scale of 25 centimeters (9.8 inches) per pixel. [The original image scale is 25.9 centimeters (10.2 inches) per pixel (with 1 x 1 binning); objects on the order of 78 centimeters (30.7 inches) across are resolved.] North is up.
The University of Arizona, Tucson, operates HiRISE, which was built by Ball Aerospace & Technologies Corp., Boulder, Colo. NASA's Jet Propulsion Laboratory, a division of Caltech in Pasadena, California, manages the Mars Reconnaissance Orbiter Project for NASA's Science Mission Directorate, Washington.
Image credit: NASA/JPL-Caltech/Univ. of Arizona
Editor: Tony Greicius
Publicado por salud equitativa en 11:32