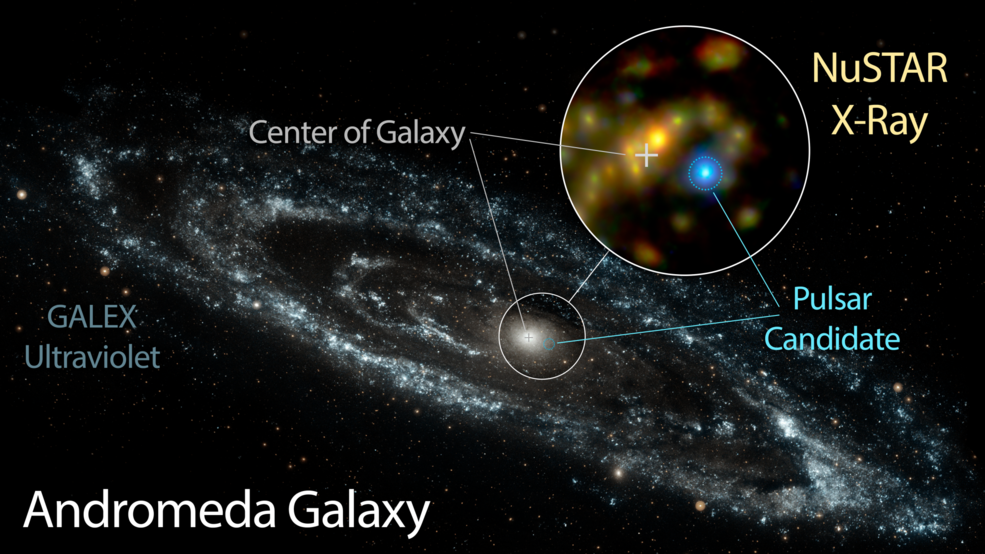 NASA's Nuclear Spectroscope Telescope Array, or NuSTAR, has identified a candidate pulsar in Andromeda -- the nearest large galaxy to the Milky Way. This likely pulsar is brighter at high energies than the Andromeda galaxy's entire black hole population.
Credits: NASA/JPL-Caltech/GSFC/JHU
Full image and caption
The Milky Way's close neighbor, Andromeda, features a dominant source of high-energy X-ray emission, but its identity was mysterious until now. As reported in a new study, NASA's NuSTAR (Nuclear Spectroscopic Telescope Array) mission has pinpointed an object responsible for this high-energy radiation.
The object, called Swift J0042.6+4112, is a possible pulsar, the dense remnant of a dead star that is highly magnetized and spinning, researchers say. This interpretation is based on its emission in high-energy X-rays, which NuSTAR is uniquely capable of measuring. The object’s spectrum is very similar to known pulsars in the Milky Way.
It is likely in a binary system, in which material from a stellar companion gets pulled onto the pulsar, spewing high-energy radiation as the material heats up.
"We didn't know what it was until we looked at it with NuSTAR," said Mihoko Yukita, lead author of a study about the object, based at Johns Hopkins University in Baltimore. The study is published in The Astrophysical Journal.
This candidate pulsar is shown as a blue dot in a NuSTAR X-ray image of Andromeda (also called M31), where the color blue is chosen to represent the highest-energy X-rays. It appears brighter in high-energy X-rays than anything else in the galaxy.
The study brings together many different observations of the object from various spacecraft. In 2013, NASA's Swift satellite reported it as a high-energy source, but its classification was unknown, as there are many objects emitting low energy X-rays in the region. The lower-energy X-ray emission from the object turns out to be a source first identified in the 1970s by NASA’s Einstein Observatory. Other spacecraft, such as NASA's Chandra X-ray Observatory and ESA's XMM-Newton had also detected it. However, it wasn't until the new study by NuSTAR, aided by supporting Swift satellite data, that researchers realized it was the same object as this likely pulsar that dominates the high energy X-ray light of Andromeda.
Traditionally, astronomers have thought that actively feeding black holes, which are more massive than pulsars, usually dominate the high-energy X-ray light in galaxies. As gas spirals closer and closer to the black hole in a structure called an accretion disk, this material gets heated to extremely high temperatures and gives off high-energy radiation. This pulsar, which has a lower mass than any of Andromeda's black holes, is brighter at high energies than the galaxy's entire black hole population.
Even the supermassive black hole in the center of Andromeda does not have significant high-energy X-ray emission associated with it. It is unexpected that a single pulsar would instead be dominating the galaxy in high-energy X-ray light.
"NuSTAR has made us realize the general importance of pulsar systems as X-ray-emitting components of galaxies, and the possibility that the high energy X-ray light of Andromeda is dominated by a single pulsar system only adds to this emerging picture," said Ann Hornschemeier, co-author of the study and based at NASA's Goddard Space Flight Center, Greenbelt, Maryland.
Andromeda is a spiral galaxy slightly larger than the Milky Way. It resides 2.5 million light-years from our own galaxy, which is considered very close, given the broader scale of the universe. Stargazers can see Andromeda without a telescope on dark, clear nights.
"Since we can't get outside our galaxy and study it in an unbiased way, Andromeda is the closest thing we have to looking in a mirror," Hornschemeier said.
NuSTAR is a Small Explorer mission led by Caltech and managed by JPL for NASA's Science Mission Directorate in Washington. NuSTAR was developed in partnership with the Danish Technical University and the Italian Space Agency (ASI). The spacecraft was built by Orbital Sciences Corp., Dulles, Virginia. NuSTAR's mission operations center is at UC Berkeley, and the official data archive is at NASA's High Energy Astrophysics Science Archive Research Center. ASI provides the mission's ground station and a mirror archive. JPL is managed by Caltech for NASA.
For more information on NuSTAR, visit:
http://www.nasa.gov/nustar
http://www.nustar.caltech.edu
Elizabeth Landau
Jet Propulsion Laboratory, Pasadena, Calif.
818-354-6425
elizabeth.landau@jpl.nasa.gov
2017-083
Editor: Tony Greicius
Publicado por salud equitativa en 5:46