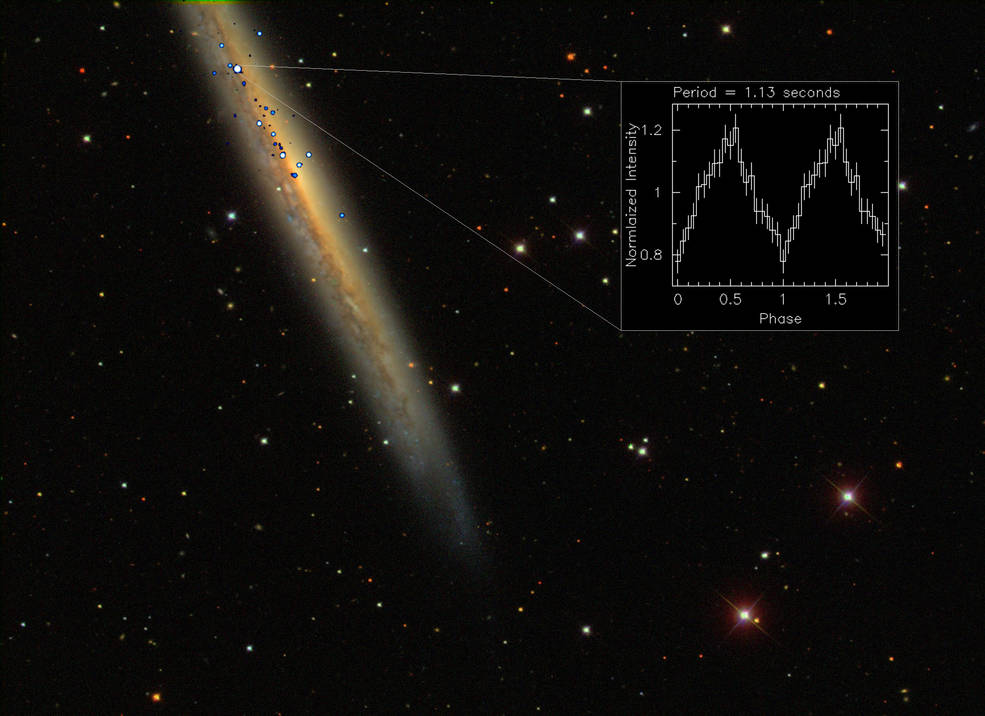 NGC 5907 ULX is the brightest pulsar ever observed. This image comprises X-ray emission data (blue/white) from ESA's XMM-Newton space telescope and NASA's Chandra X-ray Observatory, and optical data from the Sloan Digital Sky Survey (galaxy and foreground stars). The inset shows the X-ray pulsation of the spinning neutron star.
Credits: ESA/XMM-Newton; NASA/Chandra and SDSS
There's a new record holder for brightest pulsar ever found -- and astronomers are still trying to figure out how it can shine so brightly. It's now part of a small group of mysterious bright pulsars that are challenging astronomers to rethink how pulsars accumulate, or accrete, material.
A pulsar is a spinning, magnetized neutron star that sweeps regular pulses of radiation in two symmetrical beams across the cosmos. If aligned well enough with Earth, these beams act like a lighthouse beacon -- appearing to flash on and off as the pulsar rotates. Pulsars were previously massive stars that exploded in powerful supernovae, leaving behind these small, dense stellar corpses.
The brightest pulsar, as reported in the journal Science, is called NGC 5907 ULX. In one second, it emits the same amount of energy as our sun does in three-and-a-half years. The European Space Agency's XMM-Newton satellite found the pulsar and, independently, NASA's NuSTAR (Nuclear Spectroscopic Telescope Array) mission also detected the signal. This pulsar is 50 million light years away, which means its light dates back to a time before humans roamed Earth. It is also the farthest known neutron star.
"This object is really challenging our current understanding of the accretion process for high-luminosity pulsars,” said Gian Luca Israel, from INAF-Osservatorio Astronomica di Roma, Italy, lead author of the Science paper. "It is 1,000 times more luminous than the maximum thought possible for an accreting neutron star, so something else is needed in our models in order to account for the enormous amount of energy released by the object."
The previous record holder for brightest pulsar was reported in October 2014. NuSTAR had identified M82 X-2, located about 12 million light-years away in the "Cigar Galaxy" galaxy Messier 82 (M82), as a pulsar rather than a black hole. The pulsar reported in Science, NGC 5907 ULX, is 10 times brighter.
Another extremely bright pulsar, the third brightest known, is called NGC 7793 P13. Using a combination of XMM-Newton and NuSTAR, one group of scientists reported the discovery in the Astrophysical Journal Letters, while another used XMM-Newton to report it in the Monthly Notices of the Royal Astronomical Society. Both studies were published in October 2016. Scientists call three extremely bright pulsars "ultraluminous X-ray sources" (ULXs). Before the 2014 discovery, many scientists thought that the brightest ULXs were black holes.
"They are brighter than what you would expect from an accreting black hole of 10 solar masses," said Felix Fuerst, lead author of the Astrophysical Journal Letters study based at the European Space Astronomy Center in Madrid. Fuerst did this work while at Caltech in Pasadena, California.
How these objects are able to shine so brightly is a mystery. The leading theory is that these pulsars have strong, complex magnetic fields closer to their surfaces. A magnetic field would distort the flow of incoming material close to the neutron star. This would allow the neutron star to continue accreting material while still generating high levels of brightness.
It could be that many more ULXs are neutron stars, scientists say.
"These discoveries of 'light,' compact objects that shine so brightly, is revolutionizing the field," Israel said.
NuSTAR is a Small Explorer mission led by Caltech and managed by NASA's Jet Propulsion Laboratory, Pasadena, California, for NASA's Science Mission Directorate in Washington. NuSTAR was developed in partnership with the Danish Technical University and the Italian Space Agency (ASI). The spacecraft was built by Orbital Sciences Corp., Dulles, Virginia. NuSTAR's mission operations center is at UC Berkeley, and the official data archive is at NASA's High Energy Astrophysics Science Archive Research Center. ASI provides the mission's ground station and a mirror archive. JPL is managed by Caltech for NASA.
For more information on NuSTAR, visit:
http://www.nasa.gov/nustar
http://www.nustar.caltech.edu/
Elizabeth Landau
Jet Propulsion Laboratory, Pasadena, Calif.
818-354-6425
Elizabeth.landau@jpl.nasa.gov
Markus Bauer
ESA Science and Robotic Exploration Communication Officer
+31 71 565 6799 / +31 61 594 3 954
markus.bauer@esa.int
2017-052
Editor: Tony Greicius
Publicado por salud equitativa en 3:09